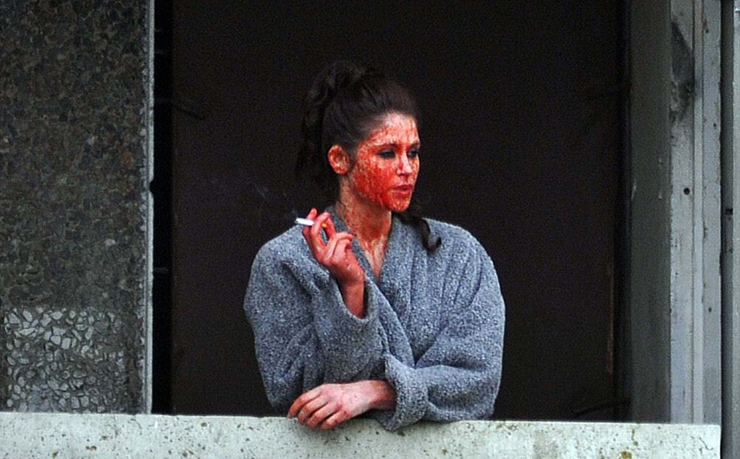 Every Halloween, unkempt angels and evil twins flood the streets. An imitation of the scary movie legends we’ve all come to admire and fear. Horror movie characters have been serving us disheveled, horribly terrific looks for decades. Whether it’s Isabelle Adjani’s blue silk dress in Possession (1983) that contrasted the or dynamic, fresh looks pulled off by Courteney Cox as news reported Gale Weathers in Scream (1996), fashion has always played a deeper role in conveying atmospheres both external, such as the shared mentality of a town or setting within a film, and internal: the struggles of the character themselves, what they are dealing with, and what they are fighting for.

Let’s get into the best of them, in no particular order.

This film still stands as one of the most iconic and confusing horror movies ever made. It is full of paradoxes and drops into places unfathomable to the jump scare accustomed movie goer. Particularly in what has now been dubbed the ‘subway scene’ in which the main character, Anna, antagonized and elated by the disgusting weight of her secret, writhes manically through an empty subway tunnel. Her long, blue silk dress has now become instantly recognizable as a stylistic moment within horror’s cinematic history. The dress is one of four blue dresses that Anna wears throughout the film. Blue is a melancholic, dreamy colour. Anna wears the distance between herself and the world.

Where would a list on the fashion of horror films be without mentioning Jennifer’s Body? Once critically rejected but now widely appreciated for its cultish longevity and importance within the cinematic horror sphere, Megan Fox renovates our understanding of what evil looks like through the lens of her high school existence. From the pink sandal ribbons playfully laced around her denim jeans to her plastic, heart shaped earrings dancing in her straight black hair, this outfit is still being talked about today. And with reason. We also love the teenage glamour of the looks: puffy bubble jackets, silver hoop earrings, velour sweaters decorated with hearts. It was the perfect camoflauge.

Although this film has been diluted to simply being a trashy slasher film, Texas Chainsaw Massacre delivers lush, fluorescent moments. It has an atmosphere so hot, you can feel it. This shot before Pam gets killed, as she stands outside of the house in her tiny red summer shorts and her golden hair, is one of the most memorable moments from the film.

It Follows could be described as a suburban manifesto, featuring shots of rows of identical houses, backyard pools, and buzzed front lawns. The fashion of the film, from the iconic clamshell phone to Jay’s pink bra, sets a unique and sought after tone. It looks cool without even trying to.

It could be said that Ginger Snaps walked so Jennifer’s Body could run. This film carries that same cool girl, untouchable energy. From the animal skull to the multiple chokers, this outfit screams fuck you. The couplet of silver hairs in front really makes it, though.

There is no one quite as on the mark style-wise in the entirety of the Scream film franchise as Gale Weathers, small town news reporter who is notorious for creating social rifts with her endless pursuit of a good, bankable story. Weathers, played by actress Courteney Cox, demands attention through her outfits: lime-coloured suit and skirt combos, leopard print headbands and red lipstick, brown leather jackets constructed with an air of precision to let us know that she has no plans to stay playing the small-town news game forever. She has big, metropolitan dreams. Her outfits confirm that story.

Much can be and has been said about this remake of the original 1977 film by the same name. It is gory, beautiful and mesmerizing. Everything from the minimal set to the spine tingling sound production makes this film a glorious, horrifying sight. And then there are the outfits, which are every bit theatrical and igniting as they are stylish. We love the sleepy neutrality conveyed via the outfits: a long, beige trench coat conveys a deep sense of loneliness. The looks are sleepy and muted, droning.

Dressed in a flurry of black hair, bold red lips and a constant, brown fur coat, Scarlett Johansson delivers not only an otherworldly performance but a defiant, simplistic look that will inspire us for years to come. Especially considering that her character is an alien extraterrestrial roaming the strange and familiar earth, Scarlett’s looks in this film remain incredibly understated and accessible to all viewers who resonate with the moodiness of small town, coastal atmospheres.

It was difficult to pin down any one outfit from this heart wrenching, gutting film. There is the bucket hat with sharks on it, the bloodied white dress and of course, Su-yeon’s mustard yellow coat with feathers bursting from the middle. Even the father’s beige turtleneck makes a statement.

Now a staple of recent pop culture, the blooming flower dress Dani wears at the end of the film after being crowned May Queen, which stiffens her movements and makes her presence that much more dominating, inspired millions of Halloween costumes last year and undoubtably many more in the years to come.

Of course, this list would not be complete without mentioning Shelley Duvall’s wardrobe from Stanley Kubrick’s The Shining. There is the checkered blue dress draped over the red sweater and tights we first see her in. And the loosely tied bathrobe. But this outfit, composed of brown corduroy overalls, a green button down and a giant, gaping turtleneck has to be given the title of one of the best horror movie outfits of all time.

Serena Isioma: ‘Once I was forced into isolation, I had to start doing things for myself’