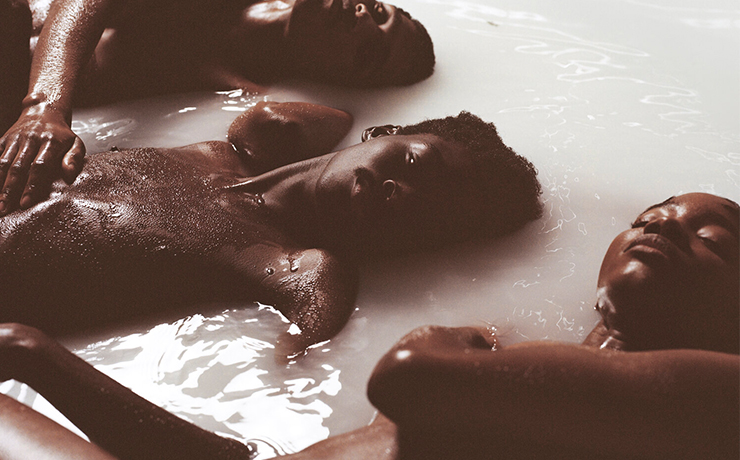 Considering this year’s social distance, visual art proved to be more powerful than ever in connecting individuals to a larger sense of community. The media of 2020 — from the iconic photoshoots to the memes — will serve as a time capsule that tracks all the nuance, transitions, and emotions evoked within the year’s events. From documenting protest footage to co-directing Facetime editorials, here are a few photographers who captured the essence of this year. We imagine we’ll be seeing much more from them all in 2021.

AB+DM is a LA-based creative duo composed of Ahmad Barber and Donté Maurice. Their credits from this year include Viola Davis in InStyle, Cardi B for Billboard, and that glamorous Essence tribute to Donyale Luna featuring Zendaya. Back in August, AB + DM also shot Zendaya using an aerial drone for InStyle.

The hues of Adrienne Raquel’s work are soft and sensual, which warmly invites the viewer to further explore her perspective. Raquel’s lens has been set on everyone from Ebonee Davis to Lil Nas X to Megan the Stallion. Her photos recall the swankiness and allure associated with the 1970s.

The FaceTime photos of Bella Hadid for Vogue Italia were not the first of their kind, but they definitely inspired a wave of creative recreations. The accessories-focused editorial can be attributed to photographer and Dazed 100 alum Brianna Capozzi with styling from Haley Wollens. Pre-quarantine, Capozzi and Wollens also collaborated on a Wall Street Journal Magazine photoshoot of a pregnant Chloe Sevigny.

Founder of Niijournal and Nii Agency, Campbell Addy is a force to be reckoned with. The British-Ghanaian photographer has a knack for crafting intimate imagery in strikingly subdued tones. Some of Addy’s recent notable shoots include those of model Aweng Chuol for Re-Edition and singer/cellist Kelsey Lu for FACT.

Through her dreamy, sensual aesthetic, Barcelona based artist Carlota Guerrero honors divine femininity and beauty. This year, Guerrero’s work further expanded on that sense of lushness as she evocatively captured everyone from Sita Bellan to Arca to Chloe x Halle. She also did some stellar collaborative work with fashion staples like Mugler and Helmut Lang.

In 2020, no one showcased colorful, hypersurrealist photography quite like Vancouver’s Conor Cunningham. Known professionally as Mescondi, the photographer and creative director helmed quite a few FaceTime shoots this year — many of which recalled the spirit and aesthetics of late 20th century skate mags. Cunningham also did trippy collage work for youthful brands like Mowalola, Namilia, and Pleasures.

On any given platform, you’ll best find New York based photographer Mark Clennon’s majestic pictures using the hashtag #shotbymarkc. His work offers cinematic snapshots of Blackness and its multitudes. Clennon was present during the summer’s Black Lives Matter protests in New York City, shooting each scene and subject with care and reverence. Throughout the year, the same level of grace was evident in his studio work with models like Tiana Parker.

Micaiah Carter’s impressive resume includes clients like Afropunk, Nylon, and The New York Times among many more. The bicoastal photographer was involved in bringing us this year’s Open Studio portraits for Pyer Moss, as well as Amine’s Limbo album cover. Most recently, he photographed a handful of Black creatives for the inaugural Black Utopia zine, featuring talents like Mereba, Dominic Fike, and Sage Adams.

Brazilian photographer Rafael Pavarotti found himself isolated in London at the beginning of the COVID-19 imposed lockdowns. Upon returning to his native country, the artist offered an intimate look into his process with a set of vibrant, pop-art collages and self-portraits for i-D. This year, Pavarotti has also shared some of his magazine work pre- and post-quarantine, including regal fashion photography for SYSTEM (an addition to his series of thought-provoking collaborations with stylist Ibrahim “Ib” Kamara.)

The work of Renell Medrano is highly impactful, as it simultaneously evokes sentiments of familiarity and regality. Throughout 2020, the artist offered us cover shoot portraits of icons like Issa Rae and Mary J. Blige, as well as a billboard spread of Yara Shahidi for Prada. Moments like her ethereal Paper photoshoot with model Jari Jones will resonate deeply for years to come.