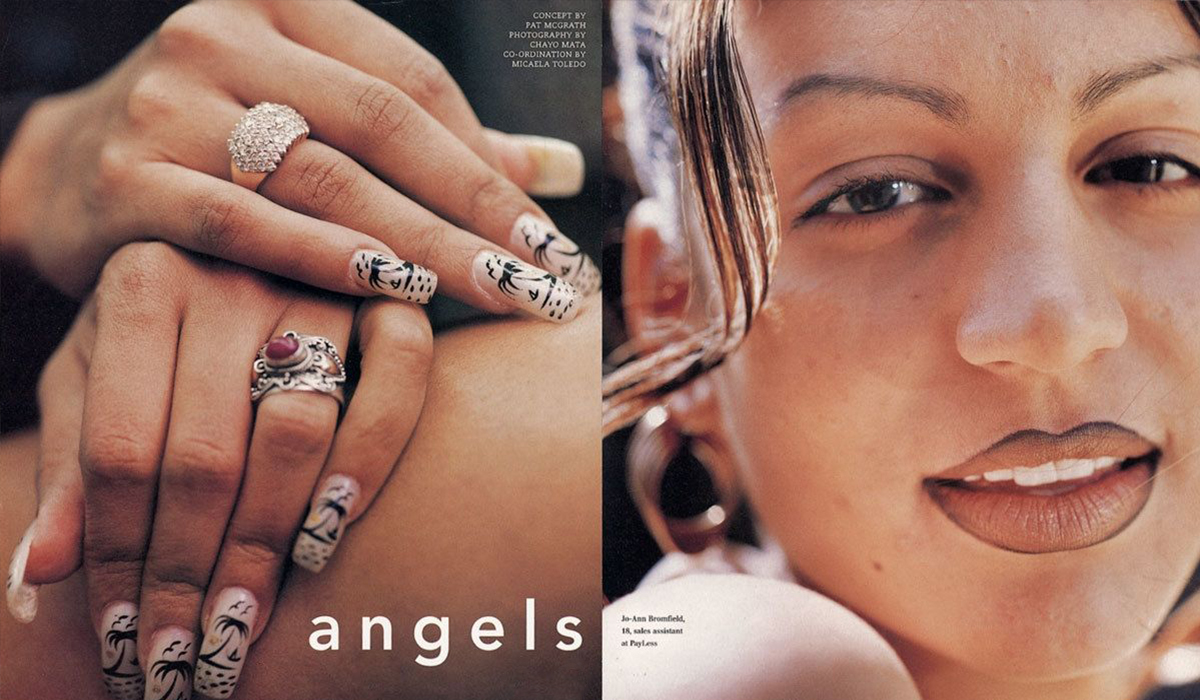 Talons. Claws. Stiletto Nails. Coffin Nails? Okay, that last one is a little dark, but whatever you call them, long acrylic nails are back in style. Expressing ourselves through our nails is one of my favorite art forms, and this season we’re seeing extra-long acrylic nails inspired by a universally loved era: the 1990s.

More specifically, acrylic nails inspired by ‘90s hip-hop and R&B are what’s all the rage this summer. Stars like Cardi B, Teyana Taylor, and Rosalía are fans of this throwback look, and I for one, am here for it. The ‘90s were a much simpler time, and it’s easy to get a little nostalgic these days. So, if you’re like me and cry every time you hear an Aaliyah or TLC song, this is the perfect trend for you. I’m only slightly kidding, but let’s get into it.

Cardi B is hands down (pun intended) the current reigning queen of the ‘90s nails trend and proudly flaunts her over-the-top manicures on her Instagram, in her music videos, and everywhere else in the world which she is slowly taking over. Throughout her rise to fame, Cardi has stayed loyal to Jenny Bui AKA “The Bling Queen”, owner of the NYC-based salon, Nails on 7th. Together the two have created countless nail looks, each one brighter and more blinding than the last. Their use of different textures and accessories is what makes Cardi’s nails so fierce. I mean, I’d feel fierce too if my nails were covered in Swarovski crystals.

Cardi B’s 90s inspired acrylics are reminiscent of the OG hip-hop queens like Lil’ Kim and Missy Elliot, who still love their intricately designed nails. When Teyana Taylor opened her ‘90s-themed nail salon Junie Bee Nails earlier this year, Missy and Kim were there to support the young singer, as well as the talented nail artists in Harlem that Teyana made sure to include at her new salon. Oh, and Missy Elliot’s Instagram is a treasure trove of amazing nail art, so start there if you’re looking for some authentic ‘90s inspiration.

Another young artist (and NBGA fav) who’s turning heads with her impressive acrylics is Rosalía. The Spanish singer is not afraid to have some length on her nails and gets hers done at Dvine Nails in Barcelona. This salon loves their bright colors, glitter, and geometric shapes and patterns, so Rosalía is definitely standing out for her youthful approach at the 90s nail trend.

If you love this trend but are wary of dramatic length, look no further than Isla Berlin for amazing designs that work on nails of all shapes and sizes. This salon slash streetwear boutique is just what Berlin’s nail scene needed, and the talented Maddy Ayers (@maadnails on Instagram) can easily transform your nails into artwork. From perfectly detailed designs to impressive lettering to using negative spaces, she always nails it. Everything about Isla Berlin gives me major 90s cool girl vibes, so it’s the perfect spot for a throwback manicure.

I love over-the-top ‘90s inspired nails because they’re a fun and eccentric accessory for the summer. Plus, they can be as fierce or as feminine as you want, all while paying homage to our favorite decade.