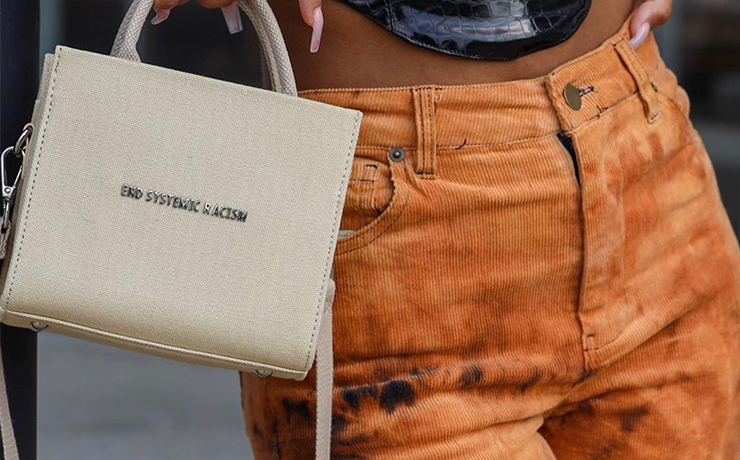 Brandon Blackwood is the Jamaican/Chinese NYC-based designer behind the “End Systemic Racism” snakeskin handbags that took over Instagram this past summer. Undoubtedly, the past year has been one of the most difficult years in recent memory both emotionally and politically. With the ESR tote that comes in Sage Green Snakeskin and even as a Mini Tote, Blackwood has created the piece to take a stance on this ongoing historical conflict. A portions of the proceeds from sales are put towards funding Pro Bono legal assistance via the Lawyers Committee for Civil Rights. NBGA had the opportunity to discuss with Brandon everything from the inception of the concept to what it felt like to see it actualized and worn by justice-advocate and reality star Kim Kardashian.

“The ESR bag has been an unforeseen break out for the brand,” Brandon shared. “I was drinking wine on FaceTime with my friend, talking about the protests, everything that’s going on in the world. We were both upset with the current climate. I was so sick of seeing a new case everyday of injustice. That’s when the idea came to me. I wanted to make a small bag that packed a big message. Something my customers could carry around with them that said what was on all of our minds. The term End Systemic Racism said it all. It’s stern, unapologetic, it just made sense. I usually only use leather for my bags but I used canvas to keep the price point low and affordable for everyone. This way it wouldn’t hurt the pockets of anyone trying to support and own a piece from the collection.”

Of course fashion design wasn’t the only thing that Brandon was good at. “I actually went to school on a Neuroscience scholarship,” he confessed, ultra-casual. “I was always going back and forth between the medical field and fashion. Fashion clearly won. I made my first collection give years ago. I was working retail right out of college and decided I would make myself a bag for personal use. I wore this backpack around and I’d get compliments everyday. That’s when I decided to try and make it a business.  I had no design education, but had interned at NYLON Magazine, and ELLE Magazine at the time. I just reached out and contacted everyone. My first article was ESSENCE Mag. I’ll never forget how excited I was.”

So, what has changed in the realms of Brandon’s life and business since the ESR tote broke the Internet? “Since a big portion of the proceeds go to the Lawyers Committee For Civil Rights Under Law (a non-profit offering pro-bono legal aid for POC), financially, it’s all pretty much the same. However, I’ve had huge brands and players in the industry reach out to me. I have some really exciting things in the works. It’s been a blessing. I’ve gained a whole new following which is exciting. I love watching the brand grow and to see people excited about my work is incredible. I’m launching a new collection in about a month and I’m excited to see the response.”

So many lifestyle influencers and notable celebs have come out to support the brand’s cause and message. That includes Kim Kardashian. “She’s probably the nicest celeb I’ve talked to Her team is stellar. I spoke to her at like two in the morning and she was down to help support and spread the message. She’s so involved in justice reform and this bag aligned well with her personal mission. I’m so happy she was down to support.”

Recently, Brandon has received some backlash from people questioning the commodification of the message. While Brandon and others who support him have every right to be upset about this feedback, his response was perfect. “It’s weird because everything was so smooth in the beginning. I think as the bag got more attention, more people became aware of it and the reaction was stronger in both ways. The hate threw me off, but we raised hell on Instagram through posts and stories. I finally spoke with three people at Instagram and they put a handle on everything. This wouldn’t have happened if it wasn’t for everyone really going in and voicing our frustration. As for nasty comments, I just delete them. It’s so satisfying.”

As for what’s up next for the NY designer, Brandon offered up a juicy scoop: “I have so many things in the works right now. All I can say is that the end of October is going to be the strongest collection the brand has ever produced. I’m so proud of what’s about to be released. So stay tuned. New bags, some outerwear, and a twist on the ESR tote coming soon.”

Thank you, Brandon! Check out his work on his official online storefront.