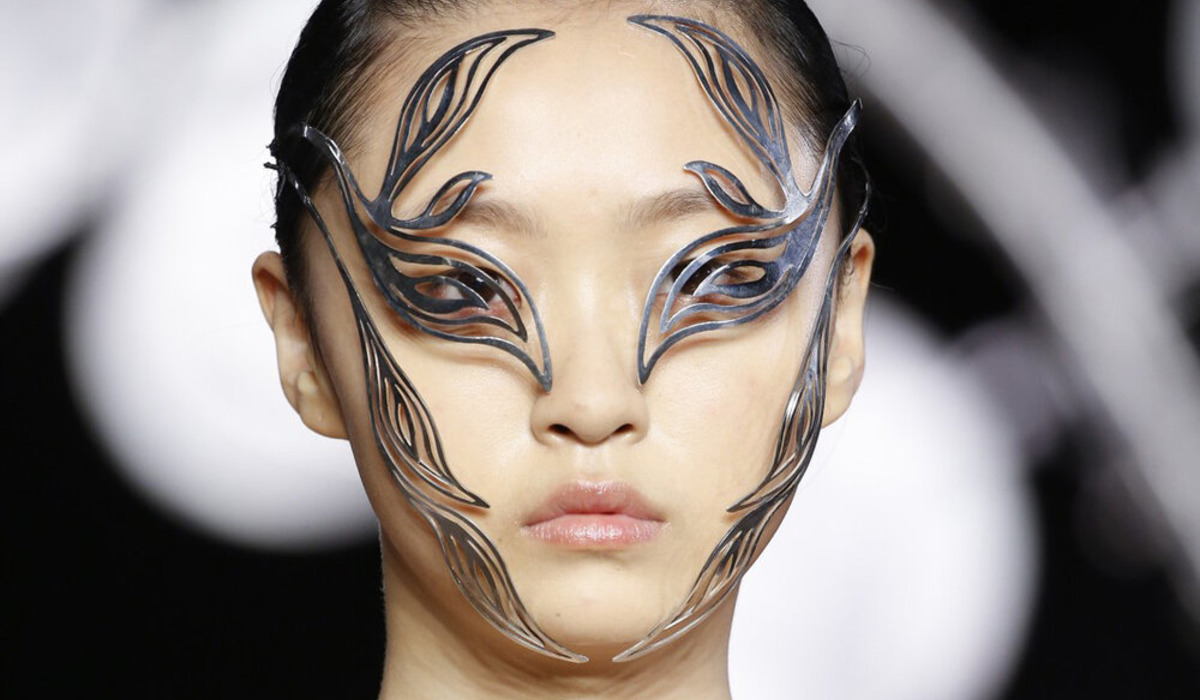 Going under the sea with Versace’s SS21 collection

An Orwellian nightmare comes to life. One of the most defining phenomenons to arise from within the problematic power structures of the digital age is facial recognition. Whilst it may have looked strange to the post war generation, now this type of tracking is common-place. I mean, gen z have even made a meme of the cultural reset, ‘to the FBI man watching me through my webcam’. Fortunately, a new means of pervading the panopticon has arisen. One that could revolutionise the way in which we live, and importantly, resist against the recognition. And if not, it’s still incredibly uplifting to see people try.

Popularily, the term facial recognition refers to the scanning of one’s key facial features, which are then logged, stored, and tracked onto and via government data-bases. These images can be taken from licence photos to mugshots, wherein biometrics are utilised to map and identify your most defining features. Growing steadily in revenue, according to Forbes, facial recognition will grow to be a 7.0 billion industry by 2024 in the US. And as much as we joke, there is a chilling reality to the ubiquity of this cultural phenomena.

However it seems in the digital age, no longer is Orwell’s prediction of this being a purely government enacted process, necessarily true. Whilst they may have initiated facial recognition, it has become, in part, our own doing. Now anyone with an I-Phone can enact this self-surveillance willingly. What’s more, if facial ID on our phones wasn’t enough, we have a bounty of other sources to choose from; from Facebook to Snapchat. Which was the true purpose behind the innocuous dog filter. So embedded this recognition has become, we willingly enact this surveillance upon ourselves. In fact, you’re a social outlier, if you don’t. This is a Foucauldian nightmare brought to life.

Oh how we scoffed from Western comfortability. We had read 1984 in high-school. We watched the news. We just never connected the dots. That such intense surveillance could never happen in Australia or the US or Canada. And that once more, we would never be in a position where we need to militantly resist it. Until, that is, we did.

In response to this increase in surveillance, a plethora of facial recognition hacks (no pun intended) have circulated online. I first heard about them in relation to the Hong Kong protests, where protestors utilised innovative and creative measures to avoid detection, from lasers to smashing street cameras.

Propelled out of the Minneapolis Riots among other things, now more than ever do we need to stay safe, protected, and well, undetected. A long chanted quip of anarcho-punk squatters: they can’t arrest us all, feels increasingly relevant here. Only in the digital age, it is perhaps more accurately modified to: they cannot identify all of us. And finally, the digital age has propelled the means to pervade the panopticon: through make-up.

In addition to CV Dazzle, other designers have also propelled similar creations. For example, design student Jing-cai Liu created a face projector, which can be worn as a mask that distorts your facial features. Similarly, Dutch artist Jip van Leeuwenstein made a plastic mask which creates facial ridges, in order to circumvent detection.

But as we advance in technology, so do these oppressive mechanisms. From 2014-2018 alone, facial recognition increased an upwards of 20 times in accuracy. So whilst these solutions can assist those who need them, it should be noted that as methods of surveillance get better, faster, and stronger – so too must our responses – if we are to subvert the surveillance.

Wherever you may be, this may be the future of resistance. To those fighting on the front lines for a better, more just world – give em’ hell, and stay safe while doing it. All power to the people, and remember, puck the panopticon, patriarchy, and 1 percent.