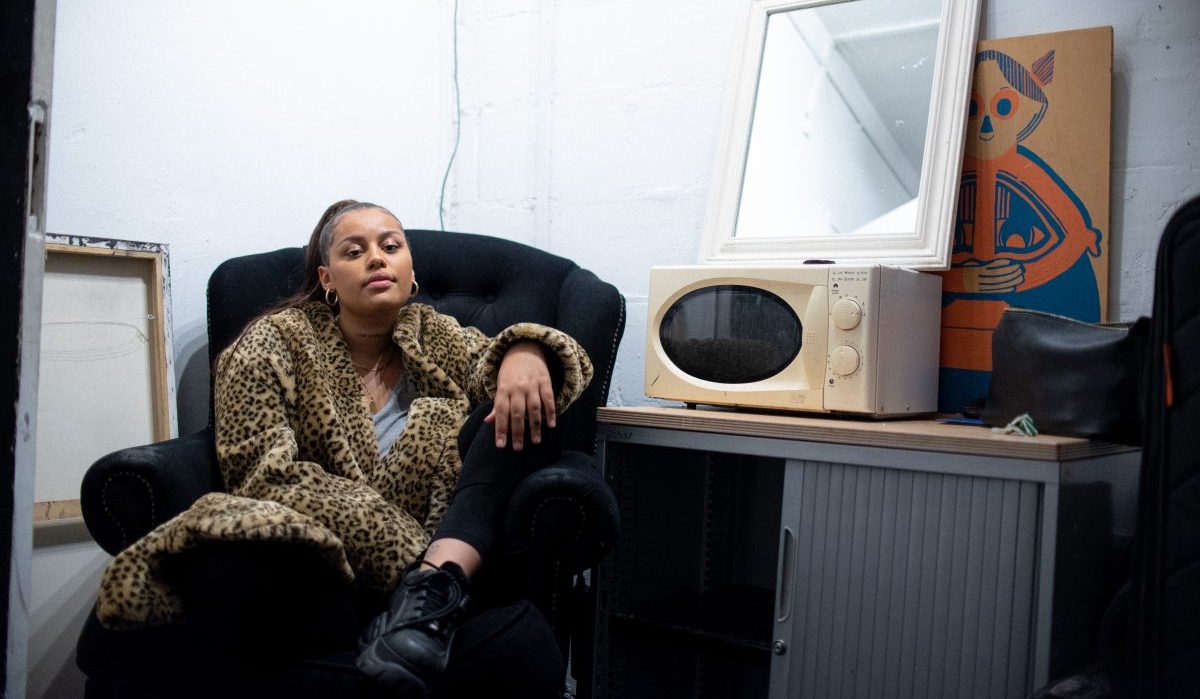 Over a whirlwind year, northern Norway’s Lil Halima has cast her unforgettable aura over the contemporary R&B space. Harnessing the power of the internet to connect with fans globally, the Norwegian-Kenyan singer-songwriter and visual artist has reached new heights in her career, transcending the boundaries of the small town where she grew up, and conquering the international R&B scene one show at a time. Following her signing to Def Jam Norway in 2018, and the release of her melodic debut EP Love Songs For Bad Lovers that same year, the superstar has gone on to release two conceptual EPs entitled for the dark days/ for the bright days and is back to make waves on the scene with her highly anticipated release of Brown Girl Diary.

When NBGA caught up with the ‘Abstract’ singer backstage at the London date of her intimate Lil Europe Tour, she’s casually strolling around the skeleton of the East London venue, dressed in a gorgeous thrifted cheetah print coat and donning her characteristic towering platform sneakers and a sleek high ponytail; bumping into her friends and fans alike. The soft-spoken songstress shared details of what her journey has been like these last few years leading up to the release of her most cherished project to date, and how its inception was prompted by her duty to use her sound to deconstruct the young woman’s plight towards finding true love — achieved by drawing on the experiences of herself and her peers. We discussed her color synaesthesia, her favorite and most meaningful tracks on the recent EP, and ultimately the message she wants people to take away from her music.

You’ve just released your Summer Tour Diary alongside your single ‘Booty’, and your latest EP is called Brown Girl Diary – Do you keep a diary, or is diary a thematic reference for the project?

Yes, I do keep a diary. I write every single day. I’ve had one since I was young, but now I actually have to force myself to write. The thing is, one week from now I will remember maybe like 10% of this week and it’s very frustrating when you’re like, ‘what did I do last Monday?’, and then you don’t know, it’s something that really gets in my head. But when I have a diary, it’s easier to keep track of it all. Also, I can very easily just not be grounded and present. I grew up in a really small place for 18 years, so my world was quite small, and now I’m projected to like all of these things, cities, and people. So I always have to write or do something to reign it in like, ‘what happened?’, this happened, ‘what did I feel?’, that’s what I felt.

The debut EP was ‘Love Songs For Bad Lovers’ what has changed for you in terms of then and the newest project?

Well, I got a better boyfriend *laughs* but also a lot has changed musically. I feel like I’m trying something different. That one [Love Songs For Bad Lovers] was very soft and showing off my softer side. This one [Brown Girl Diary] is a lot more in your face.

Favorite song off the new project?

Um, I think my favorite song is the one called ‘Block Down’ because lyrically wise, I think it’s the prettiest and has the most meaningful lyrics I’ve ever written. I grew up in northern Norway in a really small town and I was like the only little brown girl, you know? It’s about growing up in a world that’s just primarily white and having to also be a woman figuring out what you want to do. I wanted to do something that nobody does where I come from — especially being the brown or black girl, depending on what box you want to put me in. So yeah, it was a little bit about that.

The second single ‘911’ from Brown Girl Diary, is based around the notion that there are some “broken and insecure men, […] who use women as a safe haven, only to drain them and leave,” can you tell us a little more about what inspired that track?

It was just a very specific day where a lot of my girlfriends texted me and they were all sad about their boyfriends. And I realized a lot of my friends are broken by broken men. Especially my one friend, who was the main inspiration. She had a boyfriend who went to jail, and she visited him in jail a lot of times. She spent her energy helping him through that, because it’s obviously difficult, and he was really into her because she was the only one that would show up for him. Then when he came out of jail, one week went by, and he slept with somebody else. She was tired and had given so much to him. Obviously, it goes both ways, but I was just so hurt by what happened to her, that I had to express how I felt about it.

You’ve written many songs that are centered around deconstructing love and relationships. What inspired you to tattoo “love always wins” on your neck?

I believe in that statement strongly. Also, it was just for me. I wanted to have it as a reminder, but I don’t see it anymore when I look in the mirror. I don’t even remember that I have tattoos, so that whole plan didn’t really work out! My plan was initially to tattoo it on my neck because I sing, I talk to people and you use your voice to express your feelings. I wanted it there because I could remind myself that if I do everything out of love, then I will win, you know, and everybody wants to win. If I want to gain something or achieve something, then it all begins with it coming out of love. I don’t read it anymore, so I need to find some other place to put it!

What does the word “abstract” mean to you? And where do you draw your creative inspiration from?

I try to draw inspiration from everywhere and everything — I think the world is such a big masterpiece. Also, I have synaesthesia, so music is like colors or patterns. For example, ‘911’ is like a dark blue. It’s all abstract, to be honest, it’s not very extreme or super visual. I found out when my manager and I were in King’s Cross and we saw this fountain. I thought that everybody felt this, but it was a fountain with colored water things that went up like this [gestures in an upward motion] and I told her just very casually, “wow, that fountain really looks like the drums in my song” and she was like “WTF??” *laughs*. I think we had a really long day, so she was probably thinking, ‘oh no she’s making up stuff’. I feel like it’s a side effect from growing up isolated in the forest my entire life, so I found all these weird little things to entertain myself.

Where did the inspiration for your stage name come from? We get some ’90s throwback vibes!

All my friends call me Lil and that’s just it *chuckles*. I was given a Norwegian name, but I’ve always resonated more with Halima and then my friends have always called me ‘Lil’ or ‘Lily’.

Favorite show/place you’ve done so far, or any that you’re looking forward to?

I played in Paris 2 days ago and that was super nice because I had some friends there. Not just because I had friends there, but because the people were pretty engaged! After the show, we went and saw the Eiffel Tower, as it was my first time properly in Paris. I took a picture with it, posted it on Instagram, and people were like, ‘it’s okay, I’ll bail you out of jail’ and ‘illegal picture goals’, and I was like ‘illegal what?’ Apparently, it’s illegal to take a picture of the Eiffel Tower when some lights are on. Still, it was so pretty!

What do you want your fans/listeners to take away from your music?

A feeling. I want people to listen to it and feel a little bit better than what they did before they listened to it. Even if it’s being more happy or more content with the thought that somebody put words to something that you felt.

If you could achieve one thing in 2020, what would it be?

This is going to sound super cheesy, but I just want to grow a lot as a person. I want to continue being the best version of myself.