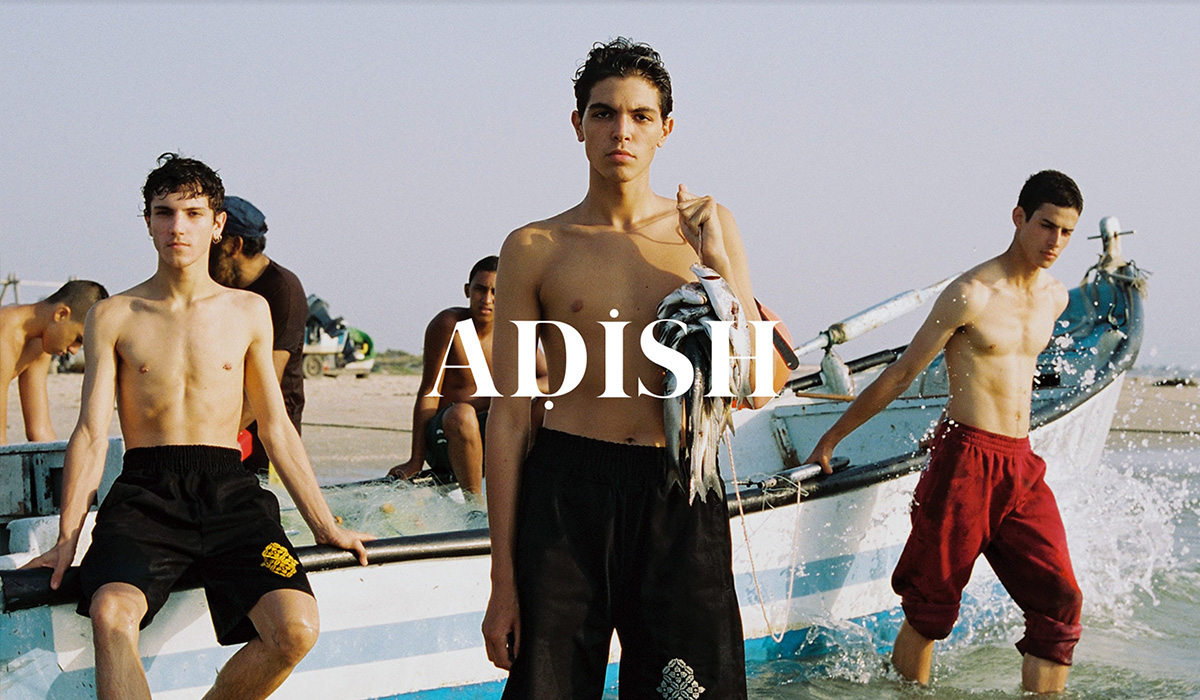 The brand stands out in comparison to any other streetwear label because it is driven by wholehearted passion and a political standpoint.

Voo Store . I met them at Soho House in Berlin to chat a little about life, work and culture.

You created this brand completely from scratch, neither of you have a formal training in fashion. Adish is driven by the strength  of your vision and idea. What does the brand mean to you ?

The brand is everything in our lives right now, because we both don’t have any formal training, we want to do more, bigger stuff, prove ourselves. We always think someone will criticize us because we don’t have any fashion related education. We want to do things young brands usually don’t do. We don’t just want to sell online on our website like all the young designers who want money,  we really want to establish something big here. Go big or go home.

When you are doing stuff that you didn’t study, you learn from a different angle, sometimes it’s hard and you make a lot of mistakes during the process, but you learn from your heart. You‘re not like ahhh I learned that in the first year, you‘re not caught in the system. We  are both creative people, we were friends before highschool and always  knew, that if  we would do a project together it would be something creative something with craftsmanship

You both grew up in Israel, near Tel Aviv. The media heavily concentrates on the political struggles of Israel and neglects the portrayal of culture and the people living there. So how would you describe the Israeli culture to someone who has never been there?

Israeli people are really creative, in Tel Aviv everyone is a stylist or a photographer, fashion designer etc..  It’s hard to describe Israeli culture because of all the negative media coverage, you really need to go there to see whats happening there. Go to parties, see the crazy nightlife, see the subcultures….in Palestine as well, we work with partners there.

That’s the thing we didn’t want to be, an israeli subculture brand. We really  wanted to do something that inspires others, something that makes our and their life better. Building a bridge between cultures. Also it’s more interesting to explore other cultures. I know the culture of Tel Aviv but to merge it with something different and to see what the similarities and the differences are and to express it through fashion is something that interests us as creatives and as people who live in this crazy area.

You both served in the military, which is mandatory in Israel. How does the Israeli youth see politics and how is it to grow up in the shadow of an international conflict?

I think I developed my political opinion in the army. It’s like stopping your life for three years to do something really different. Afterwards you see the world from a different angle. We started to work on Adish after our service because you can’t really do anything else during that time. If you are in the military for like twelve hours a day, you don’t have thoughts or energy left for anything else.

After the military we traveled and thought about the project and how there are so many craftsmanships in the middle east that are almost forgotten. Why are there Russian and NYC designers and non from the middle east who sell in high fashion stores worldwide? So we thought, why don’t we do something to express this middle eastern culture and to do it internationally and not just locally ?

Adish means apathetic. I read that you mean it in a sarcastic way, expressing how politicians  don‘t care about peace and how people should try to do things to change the status-quo. What message do you want to give to your generation ?

Work together. Especially with people who are different from you or with whom it is difficult to work with. If you succeed, the result will be the most beautiful thing in the world. It would have been way easier for us to not work with Palestinian women and just do an Israeli streetwear brand.

The embroideries were the toughest part to figure out, because it is all handmade and you work with people who never worked in fashion before. Embroidery was a hobby  for these women, not their profession. So the process is really difficult but then also the results are really beautiful.

Don’t go the easy way. Try to work with different people, try to break the boundaries. And don’t do charity, give work. We could have easily just made the embroideries with machines and given  money to a palestinian organisation. We are not doing charity, we do business with them. We are paying them crazy amounts of money, because it’s handmade embroideries, that’s what it‘s worth.

I think we found a really good way of working with them. Before we started, we tested everything, patterns, fabrics. That’s why the collection took so long, one and a half years to launch it.

Your first collection is called “we made you” and is a  collaboration with fifty palestinian female embroiders from Westbank and NYC based artist Jordan Nassar. What does collaboration mean to you and how  was the process ?

When we started the brand we really thought about how we could include real craftsmanships. We found out about this organisation that works with families from Israel and Palestine who lost a loved one to the conflict. That’s how we got in contact. We started with three women. We really wanted to get to know them, we asked them about themselves, about their favorite embroideries and what they can and want to embroider, but also about their favorite songs and stuff like that.

They were the  inspiration for the collection, because they told us, that nobody ever asks them questions or for their opinions. We found some similarities to our own family members. For example my grandmother, she is always there for the family and her husband. Always giving but nobody ever gives her the credit for it.

My  grandfather comes home and he has food on the table and everything is clean . She takes care of the family but all the respect and credit goes to the father of the family. I asked my grandmother what her favorite song is and her favorite food, she started to laugh because nobody had ever asked her questions about herself. So we really wanted them to have a voice. They gave us these patterns that get passed down from generation to generation  and the same ladies who gave us the patterns also embroidered them. It’s kind of like conserving our family heritage in a different way in something bigger than a couch pillow.

We wanted them to get the credit. On every item on the label you can see the name of the lady who embroidered it. With Jordan, he is really bringing the contemporary into the traditional. He merges these two together, the clean cuts, bold colors and traditional patterns.

You shot the lookbook for “We made you” in the last remaining  all arabic village on the coast of Israel. How did you develop the concept for the campaign and the lookbook ?

We really wanted to show the middle eastern youth. The boys hanging out at the beach. This village is one of the most dangerous spots in Israel, crime wise.

But there is this seperation between the village and the beach and on the beach everything is calm, the people are nice, everyone is surfing or fishing or playing soccer. It  is like a different world and that is what we want to do with adish. From the total mess in the middle east, to create this little beach of ours, that shows how the middle east could be.

Who is the adish costumer?

The Adish customer loves fashion but has a cultural awareness.

Someone who doesn’t just want to buy ten logo shirts, someone who connects to our story. I think when you wear adish you also have a political opinion and consciousness.

So a conscious customer.

What do you associate with the word inspiration ?

Streetwear became highly popular and there are countless brands.

What differentiates Adish from the other brands ?

We are not trying to do what streetwear labels do. I mean our cuts are classic but everyone does streetwear, even Louis Vuitton. I don’t even know what streetwear is anymore. We are trying to include craftsmaship into our items. If it is embroidery or anything else, but to do more unique, different things and details.

I think our customer will understand that it’s different to just streetwear, that our items took a lot of effort to be made.

What do you want to say to young people who don’t want to follow the system but create their own path?

Don’t think it will come easy. It takes effort and time. You have to work hard. You need money and time and you need to invest yourself 24/7. Don’t be lazy.

Thank you so much for giving us an insight into your world and Adish’s philosophy. Is there anything you would like to add to this interview, maybe a little conclusion?

You can’t just do the regular thing. Challenge yourself, challenge the system, challenge your customer. Don’t make easy art, that has been seen often enough.