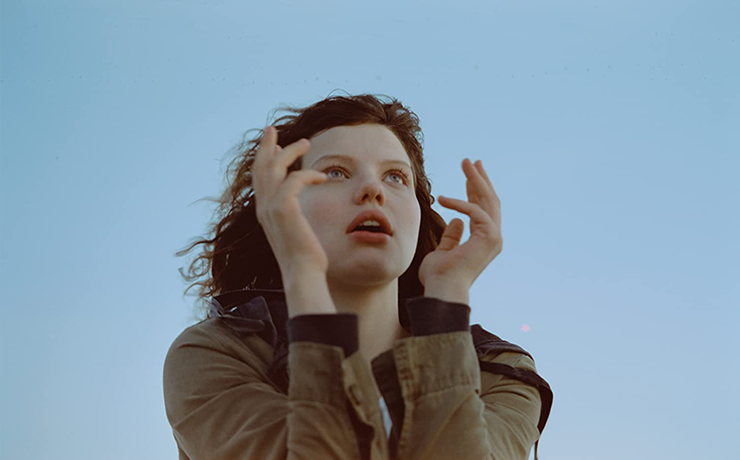 Actress Chloë Levine joined me for a chat one day after the surprise release of the second and final season of Netflix’s Trinkets, in which she plays a new love interest named Jillian who is coming to terms with her sexuality, having yet to publicly proclaim it. We spoke over the phone about acting, filmmaking, and what inspires her to create art, even if it’s art no one ever sees.

In terms of her role in Trinkets, she tells me she enjoyed playing a character who is exploring who she is and who she wants to be, especially because so many people share a similar journey to Jillian’s in the LGBTQ community.

“It was such a lovely and welcoming group of people,” she says of her cast. “The feeling of community was so lovely. I definitely want to hold on to that feeling as long as I can.”

Chloë hasn’t just worked on depicting characters in moments of vulnerability, she has also stepped forward into it when sharing her own projects, starting notably with her 2014 directorial debut with her short film Dragon, which won the Tribeca Film Festival Institute “Our City, My Story” Award for Best Experimental Short that year.

“That was really sort of a surreal and special moment,” she says of winning the award. “When I made the movie I remember thinking, ‘I’m not going to submit this to this festival.’ And then my film teacher at the time, sort of my film mentor, was like ‘No you’re absolutely doing that.’ The win was a special moment because it reassured me in a way in my voice as an artist, you know?”

I tell her how fitting it is that Dragon is about the fear, love, and relief that comes with sharing your art, especially with your loved ones, and that the film was recognized in the very same way to its theme.

“Yeah, exactly! You know it’s a deeply personal movie about a lot of things but I think one major thing is it’s sort of about my dad and I, and our kind of weird relationship,” she laughs. “So it was really cathartic to make a movie about making art.”

When it comes to her creative process for acting and getting into a character, she always goes back to root feelings.

“I just try to fit myself in the feelings that I know live in my body. So it’s almost like a controlled trigger. So I’ll listen to specific music that I know will affect me in a certain way, or I’ll create a memory that the character has and store it in music.”

She sees acting as turning different knobs within the self. “I gave myself permission to sit in certain things even though they were uncomfortable, so it just felt more organic to begin with.” Her acting process is all about finding a way to connect with every character she plays. It’s difficult for her to pick a favorite role, because each emotive path is very different from the next. There’s Jillian, a high-schooler who’s learning from an exciting, emotional, and introspective experience, or Angie, her character on The OA who goes on an inter-dimensional journey–and they’re just two in the collection.

Characters that excite her are the ones who challenge her and who revolve around personal drive and ambition. I ask her if there’s a certain type of story that she’s looking for or that she wishes to create. She admits that she’s been working on one.

“I’ve been working on a short for a long time that I eventually want to make into a feature that’s about a young girl who’s dealing with some family trauma, and the way that interweaves into her personal life. I think that abuse is unfortunately a very prevalent thing in our society but it isn’t talked about in a really honest way a lot of the time. That’s something I’ve been thinking a lot about.”

An art form she’d like to further explore remains directing, because up until now, she tells me she’s only ever directed herself most of the time in her own projects. “I feel like I haven’t gotten totally into directing in the way that I’d like to,” she explains.

“Also I know that I’ll be down to do anything that I tell myself,” she laughs. “It’s funny because as a director, it’s so scary thinking about working with actors, but then I’m like, but I’m an actor. So it’s kind of interesting, the dichotomy I guess.”

I ask her how she’d describe her love for acting separately from her love of directing. “One of the reasons I love acting so much is because it’s a way that I can think into something that’s not my self, and sort of explore different facets of myself in the same way. Whereas with directing, I love the pull that you get to tell the story. Everyone around you thinks in a similar way, and everyone’s in the same world, and I don’t know, there’s just something so beautiful about that.”

She very much looks up to director Andrea Arnold, whose films include Fish Tank and American Honey. Fish Tank is actually one of Chloë’s all-time favorite movies. Pinpointing a favorite actor is difficult, but a favorite actor performance of hers is Angelina Jolie in Gia. “I’m really attracted to actors who are not afraid to be ugly.”

She enjoys a performance that allows itself to go there without seeming to self-correct for the sake of aesthetics and prettiness.

It can be difficult when acting to get to a specific moment, Chloë tells me, considering that the atmosphere on set is very different from a solo practice space and because everything is filmed out of order. “That’s where the music comes in, where I try to store as many feelings or memories into the music so that I have easy access to whatever I was building up.”

It’s known that artists can sometimes feel the creeping fear of imposter syndrome, wondering if their work matters enough. I ask Chloë how she reminds herself that her work only really has to matter to her.

She tells me that creating itself is essential to her comfort, and that she focuses on remaining authentic. “I would go insane if I wasn’t making something all the time. My hands would just fall off,” she jokes. “It almost feels like a lot of the stuff that I make, really no one sees it, so being ok with that, because it’s not as much about the art itself but the catharsis you get from it. You know?”

She’s inspired by and would love to work with director David Lynch in the future, and also cites her favorite Andrea Arnold again. “That would be a dream,” she says. Other favorites include Céline Sciamma, the French screenwriter known for Portrait of a Lady on Fire, and Yorgos Lanthimos, director of The Favourite. “I’m a really big fan of his work.”

I ask her if she has a dream role, spanning from books, comics, movie remakes or any other art medium she’s admired. “Yeah actually,” she affirms. “There’s this book by an incredible artist—Lidia Yuknavitch—it’s actually her memoir, it’s called The Chronology of Water. I think it’s in the works that they’re making it into a movie, but that would be my dream role.” She read the memoir when she was 18.

She recalls reading it and thinking, “‘Other people feel this way too?’”

“She goes through such an intense journey,” Chloë tells me of the protagonist. “How she sort of finds her art in this really beautiful way and the way that she talks about art in general, and the ugly parts of herself, I think it’s so beautiful. I’m so in love with all of her work, actually.”

Working on Froth and Bubble was her first time as a co-producer, and she truly enjoyed learning and being involved in this new role while also acting. The film Antarctica, she tells me, is about an intense female friendship. She’s excited for viewers to catch these new projects soon, and we’re definitely looking forward to Chloë’s continued compelling collection of performance, directing, and art.