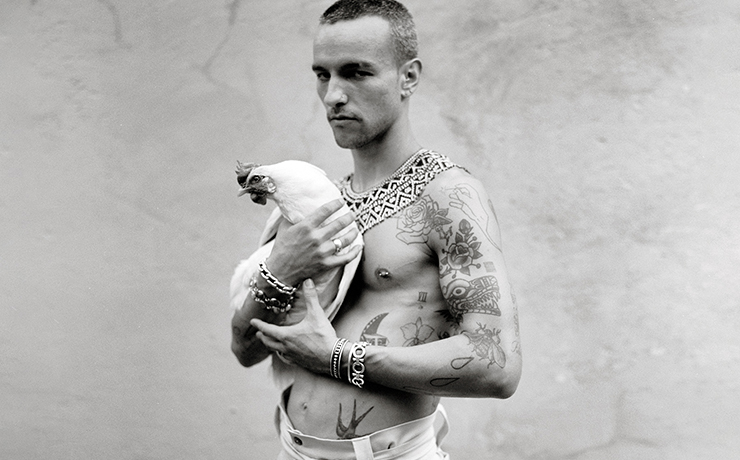 Gabriel Garzón-Montano knows he’s got that drip and his latest video confirms it. The French-Colombian performer recently announced his second studio album Agüita, which is due out on October 2nd. This makes for his first full release on the label Jagjaguwuar.

In announcing the LP, Garzón-Montano shared a coordinated and choreographed video for the title track, which was filmed in Medellin, Colombia. “Agüita” is reminiscent of the soulful and expansive trap sound that has dominated airwaves in recent years. Yet, according to a press release, the artist maintains that this upcoming album is “anti-genre, anti-fear, anti-box” meaning its limits cannot be contained, or rather do not exist. The same can be said of his notable fashion choices.

The song “Agüita” is a high-energy mix of Spanish and English with quips about soccer, making bank, and different cities for the artist to flaunt his eclectic style in. Garzón-Montano first teased “Agüita” through a COLORS Studio performance in February, where the song was included in both a medley of looks and sounds. There, he showed up in a decadent patchwork black denim suit, designed by his friend Corey Showers — which was dramatically revealed after the singer tossed his draped white trench to the side.

A multi-instrumentalist, Garzón-Montano is no stranger to being a style chameleon—both sonically and visually. In the “Someone” video, he wore white culottes and a custom Neon Zinn rope shawl for one scene and coordinated a romantic sheer blouse with tube socks in another. During the Jardin era, the artist often wore fluorescent makeup and coiffed blonde hair. Currently, he opts for a close-shaven look and showing off his growing tattoo collection.

For the Art-Camp directed “Agüita,” Garzón-Montano wears a mix of structured suits and coordinated sweats. There’s a huge monochrome moment where he pairs a fitted white sweatsuit with stacked platform boots by Le’Zapatiere. He also appears in a cropped, monogrammed all-over print look, emphasized with his initials throughout. Paris-based, Peru-inspired label D.N.I. designed the two-tone blue Agüita suit that Garzón-Montano sports in the video.

Garzón-Montano raps and dances among similarly-dressed performers in Medellin and he tapped much local talent to help cultivate his vision. The elaborate fashion styling perfectly juxtaposes the singer’s sensual nude portrait that adorns the cover of his upcoming album.