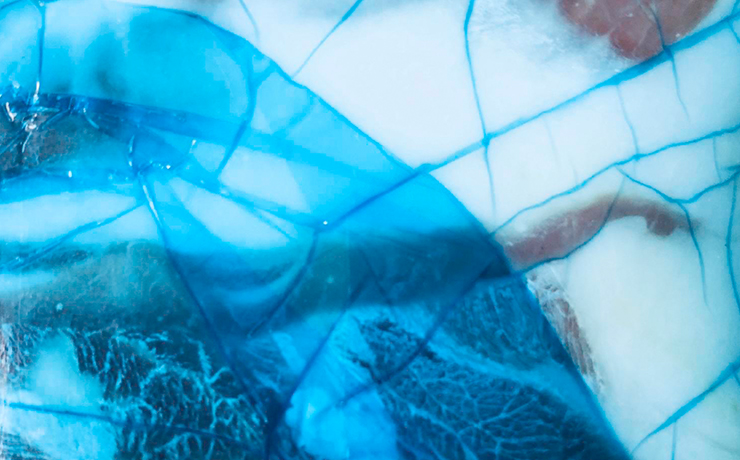 Sunday is usually the day dedicated to idleness and leisure, the serene and enjoyable one, which you can indulge with a plate of homemade pasta with friends, or with a long walk to the park.

Last Sunday, however, my idleness took the form of the ancient idleness, i.e. what ancient Latins used to call otium when devoting themselves to knowledge and learning, so I decided to get on a train to reach Adriano Cisani, an established Italian photographer born in 1991, that amid the different projects he is carrying out, has decided to give himself a moment of quiet in his residence in Venice to capture inspirations, ideas, but also serenity and time for himself.

We talked a lot and walked far and wide in a surreal and immaculate post-Covid-19 Venice, and between a whipped codfish and a visit to the Palazzo Tre Oci, he explained to me what it means to be a photographer, to follow your intuitions and, above all, to look beyond an image.

Adriano, I took a look at your site and I saw that you studied industrial design, I pegged you as more an academy kind of person.

Yes, I studied industrial design at Ied in Milan because I wanted to be a designer and I have to say that I liked it, then finally “La Moda” came. I chose to study design because I’ve always been interested in seeing what is behind things: the elaboration of a project, the creative process, and the choice of materials… But then I realized that it wasn’t the life I aspired to, especially considering the kind of person I am and the rhythms I’m used to, I admit I need continuous input not to get bored.

So not to get bored, you decided to start following all fashion weeks around the world with the project of What A Street, didn’t you?

That’s right, it was born naturally after the internship I carried out at Vogue IT: I applied on the website and I was finally selected among 1500 people. It was an incredibly formative experience because it allowed me to understand how a fashion magazine works and its editorial dynamics; At the time, I was working on trends and I had just started shooting with my father’s film camera. Then I started to shoot street style making coverage for Vogue Thailand when the magazine was still in its infancy and shortly after I entered a world-famous agency within which I worked for the next six years while making coverages during Fashion Week.

It must have been exciting, especially if we consider that at the time fashion weeks were still events dedicated to professionals, or at least they were not the “circus” they turn into nowadays.

Fashion weeks at the time were still situations where you could really do talent and trend casting, in fact around 2014, with the support of Sara Maino (now Vogue IT Deputy Director), I decided to go to the former Soviet bloc to do research and reporting of the Soviet aesthetic that at that time was showing the first signs of ferment. It has been shortly thereafter that Demna Gvasalia and Gosha Rubčinskij would explode.

I must admit that I had the opportunity to learn and grow in the “Golden Age” of fashion weeks, and this is because then it was possible to research and scout creativity and personality! It has been after 2017 that things changed: fashion brands began to exploit the situation with massive placement and marketing activities, and this certainly influenced our work that, from then on, start looking like more like that of a paparazzo! So to that, I decided to stop with street style.

I agree with you, which is why I’m increasingly convinced that street style’s hype era is over. This also translates into the shots and reportage we find online, where I struggle to find that creativity and energy they were infilled with at the time: nowadays people and looks always seem incredibly built, and consequently creativity and inspiration are affected too.

We are in a phase of inertia and decay of the concept of hype; I think 2017 has been the last year of true street style. Before then, the focus was on the product, on the garment and fashion: I believe a good shot of street style is the result of a solid background and real knowledge, but also and passion for fashion, it is a matter of focusing on certain details that the photographer is able to capture since he knows fashion brands and collections, therefore, it’s about transferring the meaning of that product and, in a certain sense, to provide an interpretation that enhances it.

Let me say that a true street style photographer does not like “exposed labels” neither total looks, he’s rather attracted by a certain style and personality of those who manage to wear a particular piece, be it a luxury one or just a t-shirt bought at a flea market.

The photographers I esteem, like Phil Oh, for example, continue to photograph the same people they used to photograph at the beginning, and this because they have remained consistent with their style and personality, think about Binx Walton, Hanne Gaby, Mica Arganaraz and Michelle Elie: their aesthetics remained stronger than market dynamics! That’s why I still consider them as muses and source of inspiration, as well as friends!

And so 2017 was a sort of watershed in your artistic career because later you decided to open a studio and focus on your projects.

Exactly. After the experience with street style, I opened a digital agency to convert all the network I had created, but a couple of years after the foundation, I decided to leave it because I chose to concentrate on working more as a “craftsman” and here I opened my studio, which is a kind of thinking room and laboratory within which I realize all my projects.

From then on I worked independently. I was guest editor of the second issue of Personne Magazine (with the support Vogue IT photo editor team, which I thank), and through this kind of “one-shot” issue, I wanted to create like a creative container inside which new talents could express themselves.

The title of that issue was Beauty Stereotypes and Diversity and was presented last September at Fondazione Sozzani in Dieci Corso Como. In this regard, I would like to understand by you what it means to talk about beauty nowadays since it is a central theme within fashion but also cultural debate and also ‘cause, fortunately, its boundaries are expanding. Can you give me your definition of beauty?

The idea behind the issue was born from an earlier project called Against Beauty Stereotypes, then with Personne, I got to provide a point of view on what beauty is today.

In general, there are still two currents of thought: on the one hand, those people who are still convinced that beauty is only the stereotypical, to be clear, as the Victoria Secret’s kind of perfect aesthetic, but there is another part who appreciate everything concerning diversity.

I can’t tell you if the latter is just a trend or if it will have a future, but surely the standards and horizons are opening.

I firmly believe beauty is something special that each of us has and that you must be able to transmit: it can be a detail, energy, or flaw… It is that uniqueness that belongs to everyone.

So don’t you have some sort of fetish or predilection in choosing one subject or another?

As for my work, I am very attracted to opposites: in my opinion, beauty must transmit something strong and create contrasts.

There are some models, with whom I’ve worked with and I know, that represent what I consider beautiful, but above all, they manage to transmit their energy and their personality; I think beauty truly comes from attitude and diversity, but I’m not talking about diversity for its own sake, because, in the end, it’s always authenticity that makes you different. Surely with these people there will always be an impact and a jolt.

But no, I don’t have a type in particular, nor aesthetic rules, it would be limiting. Each person has his proper details and elements that make him beautiful.

What are you currently working on?

Right now I am working on my first creative direction with Promenade Du Port in Porto Cervo (Sardinia). It is a very ambitious and forward-looking project since we are planning a huge image restyling for next year, in addition to this I continue my artistic path and I am preparing a project related to the historical period we are all experiencing post-Covid-19.

Can you be a little more specific?

I can’t tell you too much! But I can say that the pandemic has had such a huge influence on our lives, so we’re experiencing a massive change, we will first change as individuals, that’s why I think it’s important to remember what we were since we are heading towards a new era.

It’s time to conclude, but first I would like to understand what is the creative development behind your images and, finally, which are the photographers you consider as reference points within your aesthetic.

Certainly, I would say Helmut Newton for the cut he creates the images through, Martin Parr’s aesthetics and themes, then Sally Mann, one of the best photographers in history. The last one we’re going to see in a few minutes at the Palazzo Tre Oci, I’ll just tell you that it’s a sort of male alter ego of Diane Arbus, in a less caricatural version!

To answer the first question, I don’t want to go too much into the details of my personal approach, but I can tell you that when you create a beautiful photo is also the moment when the “click” becomes the least important thing.