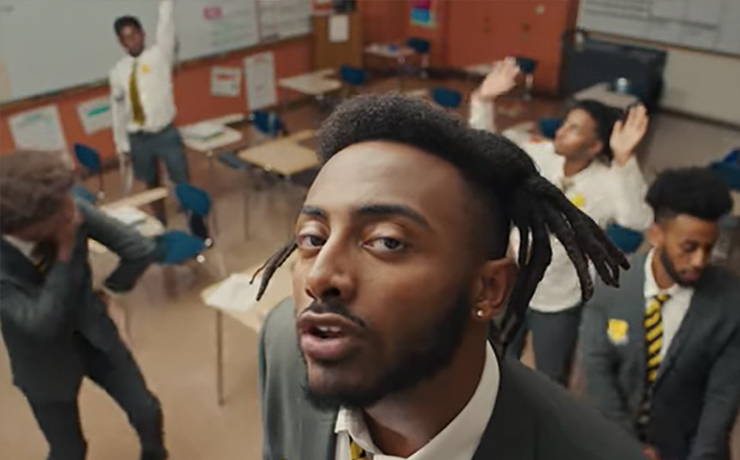 In conversation with Nico Kartel, the photographer giving us hood glory

Ever since sampling Ol’ Dirty Bastard’s “Shimmy Shimmy Ya” and releasing his single “Shimmy”, Aminé envisioned this year as his own and the prophecy is coming true.

Featuring JID, Slowthai, Vince Staples and more creatives on the record, he uses his 44 minutes of fame in “Limbo” to talk love going south, going from rags to riches on his own, and does not sugarcoat the struggle of black lives.

The album was announced alongside the release of single Compensating featuring Young Thug, later on joined by a music video dipped in washed out colors and a romantic green tennis field with shots of Aminé cooling off in a pink bath and many more of his friends, because we all know by now: If Aminé eats, the whole team eats.

“Riri” is a complicated love letter overlaid on top of a lively shoulder-dance tempo and the single’s music video was delayed due to the #BLM movement. “Activism is essential right now so I put my focus there for the past few weeks. We skipped editing sessions to march in the Black Lives Matter protests. I’m dropping the “Riri” video today because “it’s important to show black joy in a time where we’re constantly seeing imagery of pain and suffering,” says Aminé speaking on the release of the track’s video.

Cue the chorus of the 12th track “Becky” We try and tell ’em, but they try and tell us that we can’t /And no, it’s not a law, but you know we ain’t the same / I’m fed up with a world that I know I can’t change

With a suburban upbringing and racial inequality as motivation, the Portland born rapper expresses his moral concerns through genius flow and one-liners, fresh and raw. The album also features an interlude of Jak Knight’s voice reminiscing on the heartbreak from the passing of Kobe Bryant, and track “Mama” dedicated to Aminé’s mother, muse and best friend, with links to 2Pac’s “Dear Mama” and Kanye’s “Hey Mama”.

I did it on my own and I’ll do it again—the album goes from gritty and dim sounding track “Pressure In My Palms” to sickly sweet “Easy” featuring Summer Walker blessing the song with sensual feminine vocals, talking ‘bout how love is anything but easy.

The chemistry between Aminé’s sound and lyricism is undeniable—from abundant play with bongos to a sacramental choir ending, he mixes so many worlds into an alluring multiverse of RnB, hip-hop, pop and modern. “Limbo” goes from old-school to new-school, sugary to spicy, and serves as an ode to his ambition and years of hustling—every ounce of ego and bad f**ing attitude is well-deserved.

You can get ready in the mirror and listen to it all here.

Revisiting When I Get Home by Solange