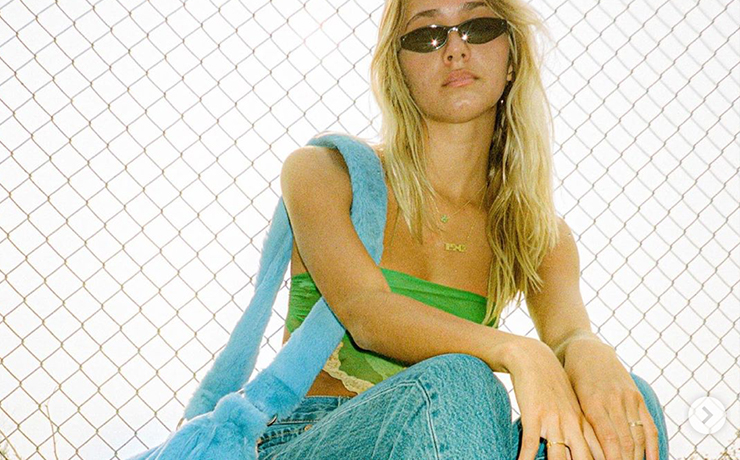 Young, sweet, and just seventeen, Lola Keyser — in a matter of months — has created the notable handbag brand Lolita Jade. It all started when she spotted a UNIF bag that was out of stock, her grandma convinced her to make her own and from there, Lola took the micro-sized purse fur bag phenomenon by storm. The brand was started 6 months ago and has already been seen by the likes of celebrities like Sydney Carlson, Devon Carlson, and Madison Beer. NBGA had the chance to chat Lola Keyser as we got the inside look of what it really takes to manage an upcoming brand.

HOW DID YOU START YOUR BRAND?

My grandma and I made this makeshift bag basically the prototype. And that was six months before I even started fully making them but in those six months, I was getting all these compliments. I posted on Instagram, the whole thing, and all my friends wanted one, to my surprise. I was like why? It’s so terrible! The first one was literally falling apart. So then in quarantine, I just grinded about fifty of them out and started selling them on Depop. My parents are kind of in the fashion industry and I never really saw myself doing anything else if that makes sense, but I definitely didn’t think it would be purses.

HOW WERE YOU ABLE TO FIND PLACES IN WHICH TO PRODUCE THESE BAGS?

My parents are in the fashion industry. So, they have a warehouse and a factory in downtown LA but I chose not to go that route just because they do things on a bigger scale than I do. So, I hired seamstresses that I’ve known since I was a little kid to do it and I pay them really well. I make sure that the whole process is ethical. My main thing going forward, as the brand grows, is figuring out a way to do it as sustainably as possible and as ethically as possible because I’ve seen those sweatshops, it’s awful.

WHERE DOES YOUR INSPIRATION COME FROM?

I would say Pinterest and 90s Pinterest, if that makes sense? For example, 90s outfits and model streetwear. But I think where I’m actually really looking for my inspiration is where there is no inspiration, like what’s missing? I definitely think I take inspiration from models and what they wear, my friends and what they wear, popular bags in the 90s, and popular bags from two weeks ago. But, I’m definitely not like, “Oh, I’m gonna totally recreate that bag”… I want to get in the head of my customer and myself and think “Oh, what bag would I want and who’s selling it?” and if there is no one selling it, let’s do it, you know? I want to be that brand that people come to for things that they can’t really find anywhere else

WHAT INSPIRED THE NAME LOLITA JADE?

My name is Lola and my middle name is Jade. And, my family friend of 17 years always called me Lolita. She’s Mexican and she speaks Spanish and I’m fluent in Spanish. So when I was coming up with the name, I didn’t want it to be my full name because I didn’t want to be perceived like I’m ‘full of myself’. So I thought, “Okay, what about Lolita?” because my friend Frankie calls me Lolita, and then I just attached my middle name to it. Trust me it was about a two-month process of thinking about the name but that kind of always stuck.

WHAT DOES YOUR BRAND REPRESENT?

Positivity. And I know that’s cliche, but I just want it to be a positive space. I want it to be a place where I put out great products that people are happy with. And, I’ve definitely seen some TikToks where people open their packages, and I see how happy they are. It warms my heart, I feel like going forward I’ve always wanted Lolita Jade to be a positive space that people can feel welcomed. I’m constantly checking My DMS and talking to people and I think Lolita Jade as a whole fits that image, you know? There’s so much shit going on and bags are obviously not going to help it but I just feel that having that little spark of happiness in your day by seeing my posts and you resonate with the outfit or the message is really important. I want to spread positivity rather than hate.

HOW DO YOU FEEL ABOUT PEOPLE LIKE MADDIE ZIEGLER WEARING YOUR BAGS?

It is so crazy because these are the people I’ve looked up for years, I’m only seventeen but they really are my inspiration. I’ve watched those girls on YouTube and I’ve watched Dance Moms, I’m definitely involved in the pop culture. I know who these people are and the fact that they even respond to my DMs or buy my bag sometimes is surreal. And I always say this, but it has not hit me. I really appreciate seeing those with big platforms post about my bags because it’s helping out a small business.

Being seventeen and accomplishing as much as she has, Lola Keyser has become an inspiration to many young girls that want to get into the fashion industry. From her faux fur bags to her mini leather purses, her bags give us a sense of nostalgia and fun that we love. She’s recently released a new collection of cheetah printed fur tote bags that are to DIE for. Lolita Jade is definitely a brand you should add to your closet because not only is it sustainable but the bags are 100% a staple piece that every girl needs in their wardrobe. I, for one, am excited to see where Lola takes the brand as it grows in the future.