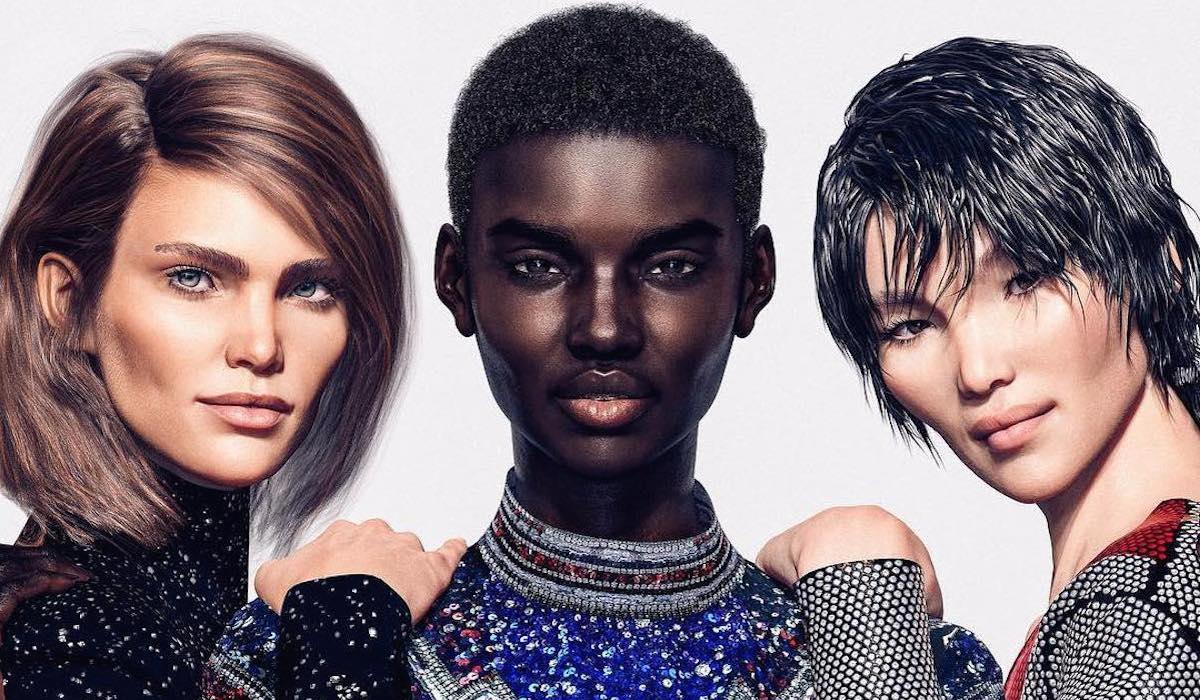 Shudu is a drop-dead gorgeous dark-skinned goddess with a perfectly symmetrical face and toned body. The model’s undeniable beauty was brought to mainstream attention when Fenty Beauty reposted a picture of Shudu wearing Fenty makeup on Instagram. A post the brand has removed since then.

The first few pictures on Shudu’s Instagram account are of her wearing neck rings associated with the Ndebele people of South Africa, the people from which her name originates too. The pictures are captioned with hashtags such as #melanin and #shade490, the darkest Fenty Beauty foundation shade. Earlier this month, it was announced that Shudu, together with two other models, Margot and Zhi, had been added to the “Balmain Army”. An announcement that has made several headlines since then.

Because there’s just one thing.

Her skin might have pores and her hair might be textured, but Shudu is a digital simulation, an online piece of art. Oh, and the other two Balmain Army models? Margot from France and Zhi from China… they’re digital simulations too.

“When my team and I saw the first generation of CGI models, we told ourselves that if this was the way the world was going, we wanted to ensure that diversity plays a strong part in that future,” the Balmain creative director and designer Olivier Rousteing wrote regardning the fact that two of their CGI (computer-generated imagery) models are POC – or should I say CGI-OC?

Honestly, considering that Balmain is well versed in having the Kardashian/Jenner clan grace their brand campaigns, is there really that big of a difference between digital avatars such as Shudu and Zhi vs Kim and Kylie? They’re all basically the result of carefully curated physical facades, be it courtesy of a digital 3D artist, or plastic surgeons, personal trainers, aestheticians, dieticians, dermatologists and Face Tune and Photoshop beyond recognition. Potato potato, it’s all unattainable.

Although Olivier Rousteing, who is a black man himself, proclaims that creating CGI models of colour was a deliberate decision in making sure that diversity plays a part in what seems to be the future of the fashion industry… in an industry that has built its entire legacy on misogynistic and racist structures, it’s not quite that simple. Because there’s one more piece we must add this equation:

Shudu is created by a white man.

The person behind Shudu and her more recently created French and Chinese counterparts is 28-year-old British fashion photographer Cameron-James Wilson. Although Wilson created Shudu with nothing but good intentions in mind, his art project has received backlash for its problematic nature, and righteously so.

Sure, Wilson’s art project is an exploration of visual beauty and aesthetics and thus some might argue that Wilson’s art might be a celebration of black beauty and thereby anti-racist, a notion I’m assuming Balmain would get behind. But what we essentially have here is a white man who figured out a way to work with black women without actually “working with” or paying them. Wilson’s art has been referenced to as a 21st century “blackface,” allowing white audiences to indulge in their fascination with blackness without having to interact with actual black people.

Reading interviews with Wilson, it is apparent to me that he didn’t spend too much time reflecting on the historical and societal connotations of his art. “I had never really considered hashtags as something very personal to people—I thought you throw them on anything,” Wilson shares in an interview regarding his use of hashtags such as #melanin. “I made a point to change them and to make my hashtags very specific to what Shudu is about. Now, they’re all very much 3D and CGI — things like that.” I feel like hashtags are just one thing out of a long list of things Wilson didn’t really consider before embarking on this project though.

The way I see it, since Shudu is in many ways a conceptual art project pushing the concepts and possibilities of digital development, art should simply (almost) never be censored or banned. While at the same time, people like Wilson cannot step into a super problematic 2 trillion dollar fashion industry and reap what social activists have sowed without facing repercussions. After all, it’s because of men like Wilson being called into question that actual dark-skinned models such as Duckie Thot, Anok Yai and Leomie Anderson are able to make a name for themselves in the fashion industry of today. Let’s not put social progression in reverse in an attempt to move digitalisation forward, shall we?

Wilson strongly believes that this is the direction the fashion industry is moving towards, stating that in the future, models like Kendall Jenner could create a CGI copy of herself that could book modelling gigs she might otherwise not have time for. “You might not get access to the talent themselves, but you might get access to their digital avatar, and the actual human being will make money off of the use of their avatar,” he shares.

And indeed, the Shudu-lead Balmain Army models aren’t the first to break CGI ground in the fashion/influencer industry. A few months back, I wrote an article on the digital simulation Miquela Sousa, a 21-year-old Los Angeles-based Brazilian/Spanish influencer and musician, better known as her Instagram handle Lil Miquela. Featured in Vogue and just about everywhere else, Lil Miquela is being catered to by the mainstream media as one of our time’s most influential… people? Lil Miquela does not have a beating heart or blood running through her veins, she is, however, verified with a blue tick on her socials. And that’s affirmation and acknowledgement most of us mortals could only ever dream of.

The questions this uncanny evolution poses are so many I could literally go on about this forever (won’t there be an over-saturation of model presence? how can humans ever compete with some computer-nerd’s fantasy idea of a woman? aren’t today’s beauty standards inhumane enough? this is so cool though ughh why do I want to see more of it?)

But at the end of the day I guess we have to see it for what it is: a cool art project turned an innovative marketing scheme, all done with a lack of intersectional analysis and social contextualisation. And just like we like for our CGI avatars to be created with the finest attention to detail, let’s not demand less from commercial campaigns.