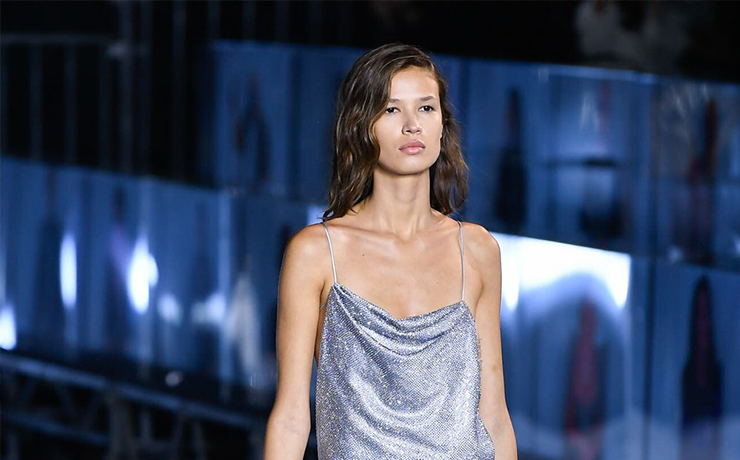 Balmain brought high-impact glamour and prestige this Paris Fashion Week in honor of their 75th year anniversary collection. Helmed by creative director Olivier Rousteing, the show (one of few presented IRL this year) was a breathtaking retrospective of the fashion house’s past and a bright look at its future.

Where do I start? The neon! The glitter! The effortless drapery? Wow. Balmain took to Instagram and YouTube ahead of the presentation to share inspiration for this collection. With this year marking such a milestone in Balmain’s legacy, much of Rousteing’s inspiration stemmed from founder Pierre and his impact on timeless fashion. The creative director, who has held the role since 2011, was sure to bring attention back to the label’s signature motif by reimagining the print in numerous ways for SS21.

The show opened with an instrumental of The Weeknd’s “Blinding Lights” that was accompanied by voice overs of Pierre Balmain. In the anecdotes, the fashion pioneer spoke on the power of well-fitting clothing and colors that make the wearer feel sexy and chic. These theatrics occured prior to the models walking out and Rousteing sat on the stage as the words of his predecessor provided an inkling of what was to come.

As soon as the music picked up and the lyrics began, the magic of the moment truly set in. The models appeared at lightning speed in a wave of neon and finesse. What I found so captivating about Balmain’s SS21 collection is that the designs mean serious business. The power suits in shades of volt and hot pink gave an air of cool; polychromatic sunglasses and chunky sneakers added to the mystique. The pointy structured shoulders (on both blazers and dresses) reminded me of epaulettes in their assertion. Across the board, the makeup worn was pretty classic and a red lip popped up every few looks.

The prospective wearers of this collection are those that have high places to go and important people to see. Where are all these stylish individuals headed and can I go too? After all, most of us are in a state of wanderlust post-lockdown and these are garments to be seen in. With the commute-ready envelope clutches, backpacks and totes covered in Balmain’s logo — some of which were detachable from belts and gold chains — Rousteing has already figured out how to carry your wares while on-the-go.

In over 100 looks, the creative director showed true range this season: it’s giving classic French with the striped sweaters and veers a little preppy with the collegiate blazers and embroidered crests. The glittery dresses and wrap blazers are very glam but also futuristic (especially considering the volume of neon). The enmeshment of the aforementioned trends was most noticeable in outfits like the neon tweed blazer with the raw hem, mesh monogrammed turtleneck, and flared grey trousers. Neon and grey has been a recurring colorway in fashion for the past few seasons; Balmain proved that it’s still going strong.

On the runway, another sophisticated color combination followed shortly after when a model strutted out in a draped lilac and aqua dress with pink sock boots. Also a standout moment? The styling of a silver disco jumpsuit with a crisp white blouse and blazer on top. As fashion designers envision and craft for the future, consumers are discovering that there are no rules when it comes to fashion — style is inherent and innate. But there are definitely a few tips and tricks I’ll be taking from this show when it comes to my own closet.

I’m reflecting on Pierre Balmain’s quotes that were broadcast at the start of the show and he spoke heavily on the impact of the color black when getting dressed. This statement truly hit home for me when I saw that all-black mesh ensemble, complete with a layered crewneck, wrap skirt over trousers, and gloves. Post-show, I’ve spent some time thoroughly trying to understand its brilliance; it was a show-stopper that will live rent free in my mind for the unforeseen future.

Balmain SS21 is both a visual feast and a celebration of heritage. The high-voltage power suits draw you in, but ultimately you stay to revel in it all — especially that glittery parade of dresses in the finale.