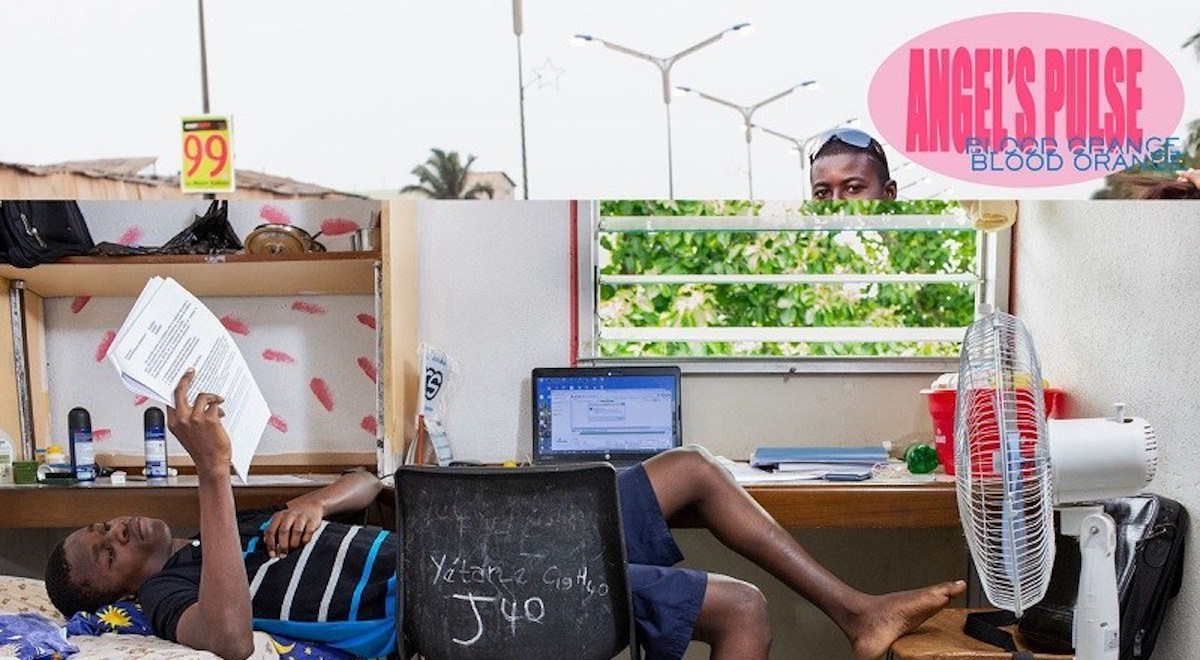 Almost a year to the day since the release of Negro Swan, Devonté Hynes, a.k.a Blood Orange, releases his mixtape Angel’s Pulse, a collection which serves as an epilogue to the album prior.

“My new record is called “Angel’s Pulse” & I performed, produced and mixed the entire thing myself. I’m calling it a mixtape.

I have a habit through the years of making records that I just give to friends, or on tape to people on the street, or no one. Usually this material is made directly after the album I’ve just put out. Somewhat of an epilogue to the thing I’ve made before. This time.. I decided to release it.

I put as much work and care into it as I do with the albums I’ve released, but for some reason trained myself into not releasing things the rate at which I make them. I’m older now though, and life is unpredictable and terrifying… so here you go mates.

Hope you enjoy. Catch you soon.

Only announcing the mixtape five days before it’s release, Hynes surprised fans with features from Solange, Tinashe, Toro y Moi, and BROCKHAMPTON’s Joba. Since Hynes’ early indie-rock days in the band “Test Icicles”, he has been creating music that serves as more than just an album, but a soundscape that surrounds the listener.

I Wanna C You

The mixtape starts with I Wanna C You– a simple introduction that serves as a precedent for the rest of the tape. Hynes sings in the minute-long song while the electric guitar accompanies. The main lyrics are, “I wanna see you and keep it in your home”.

Flowing directly from I Wanna C You is Something to Do, a song that relies on a healthy mix of electric guitar and synths that merge. The fifty-second interlude only includes the lyrics, “Waitin’ for something to lose”.

Dark & Handsome has already been noted as a fan favorite from the mixtape, most likely caused by the feature by singer Toro y Moi. The song is majorily centered around the vocals and is considered to be a “meditative song”. The lyrics seem to represent yearning and nostalgia, as seen in the lyrics “Cryin’ for the ones I lost in ’18” and “Nothing ever makes you get past it, 33 and still can’t stop thinking” as well as others. The songs debut was on April 17th earlier this year on The Late, Late Show with James Corden, as a medley with Something to Do.

Next comes Benzo, a song which includes a cello introduction as well as a saxophone backing mixed with Hynes’ signature synth and beat combination featured in the majority of his songs. The lyrics “Open the door, leave me with arms exposed” seem to stand as a mini-chorus for the song that gives the sense that the song is about one’s unsureness in life, which makes sense considering Hynes originally didn’t plan on releasing this mixtape until he ultimately did. Benzo is accompanied by a music video directed and edited by Hynes which features a Victorian-era performance by Hynes- peruke wig and all.

Birmingham starts with an opening verse from Kelsey Lu, which tells the story of another searching for her child after an explosion in Birmingham. The song continues in a gospel type melody as Ian Isiah sings “My baby, where are you?” The song serves as Hynes’ tribute to the four children who were killed in the white supremacist 16th St. Baptist Church bombing in 1963, Birmingham, Alabama. More specifically, the lyrics coincide with the story of Maxine Pippen McNair, a mother who famously found the shoe of her daughters while searching in the building’s wreckage.

Good For You is one of two tracks on this mixtape that features R&B singer Justine Skye. The song’s lyrics detail two sides of a dysfunctional relationship- Hynes singing about the stress of the relationship while Skye insists on the opposite.

Baby Florence opens with a powerful beat and transitions into soft synths. The song is, like a few other songs on this mixtape, overwhelmingly centered around the production of the song, rather than the vocals and lyrics. The only lyrics in this song are, “What is it you notice all that way down? Our vacant sounds can help you figure it out”. Though the lyrics don’t necessarily give very much insight into the meaning of the song, they do provide the audience with a classic Blood Orange song to enjoy.

Opening with a rap verse from Project Pat over Hynes’ signature ethereal synth, Gold Teeth seems to be the most lyric heavy song thus far in the mixtape. The chorus is sung by Hynes and accompanies by Tinashe. The second verse is rapped by Gangsta Boo. The song’s lyrics are primarily about richness and using money to buy luxury items and experiences. The lyrics are typical of popular rap, but the verses are layered over soft synths and light beats, which is a concept that only Blood Orange could pull off.

Berlin’s introduction is sung by both Hynes and Aaron Maine, of duo Porches, in harmonization, followed by a refrain by Ian Isiah, who’s voice contrasts Maine’s in the best way possible. Following is another severe contrast in vocals: a pitched verse from Hynes. The chorus lyrics, “When I felt it in my head, Just like I remembered it, Then I got away from it, Yeah, just for a little bit” have a vague meaning, which is common, but leave the listener to create their own somber story.

Tuesday Feeling opens with electric guitar chords and a simple beat which builds into some of Hynes’ best vocals on the mixtape. Tinashe accompanies Hynes as a backing vocal in this song, as well. The lyrics, “Choose to ignore blues, Something to get in your way, you choose to stay” represent the message of the song, which is the way staying in tractionless situations is easy when it is comfortable, but it breaks you down in the end. This track easily has some of Hynes’ most meaningful lyrics from the mixtape.

Opening differently than every other track on this mixtape, Seven Hours Part 1 opens in a late 90’s style rap beat: heavy in shakers and dark synths. Hynes’ samples his own 2018 track Saint, from his previous album “Negro Swan”. Hynes rap is steady throughout the song and serves as some sort of a cipher rather than a structured song like the others in this mixtape.

“Angel’s Pulse” is full of features, similar to that of Tyler, the Creators recent album “Igor”, but Take It Back carries the most amount of features for one track. It includes Justine Skye in the introduction, Arca in the second verse (which is all in Spanish), and Joba of BROCKHAMPTON on the third and final verse. This track holds the longest run time of any track on the mixtape, at 4:30. All of the features differ greatly in content, sound, and vocals, but are all made cohesive by Hynes’ smooth vocals in between, which serve as a connecting chorus.

Happiness is the track on the album that I suspect die-hard Blood Orange fans will love, simply because of the familiarity it possesses. This track has the same feeling as previous Blood Orange tracks like Best To You and Chamakay from previous albums. The lyrics “How do you know when life will choose to fade away? How do you know if you’ve been wrong? Put it down and show you’ve taken all that fades, Know it’ll take too long” seem to stick out the most in this sad synth track.

Finishing off the mixtape with Today, Hynes wraps up the world of “Angel’s Pulse” and the preceding “Negro Swan” by mentioning a few song titles from the two, with the lyrics “Loose touch and confidence never seems the same, Eyesight stays clearer when selfishness became, Number one and chewing gum, you were afraid, Big mistake in stepping out, nothing good today”. The music is an ambient synth that fades as the mixtape finishes.