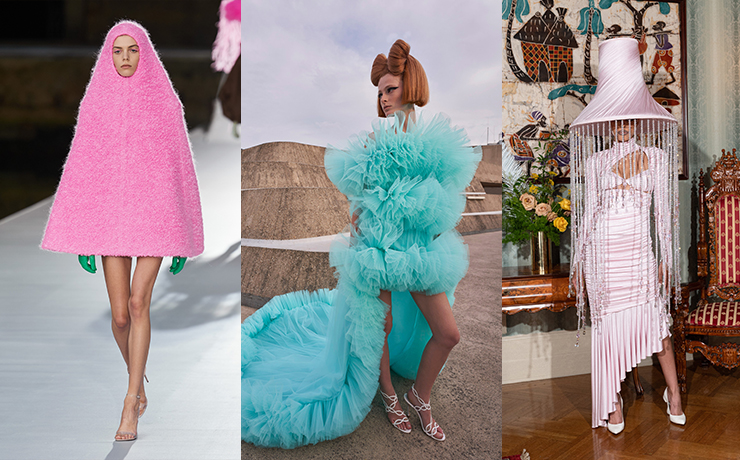 Images Throughout Courtesy of Vogue Runway

Within the realms of effectual couture – there were distinct designers who stole our breaths away this season (and this for the first in-person couture shows since quarantine may we add). In lieu of upcoming Fall 2021 trends, it was the likes of Balenciaga, Giambattista Valli & Pyer Moss who focused on refined, referential and story-telling creations. In evoking far more than mere garments, their unique collections (along with the worlds they created around them) cemented each as notable moments in fashion history.

A fan favorite for more than just what meets the eye. Designer Kerby Jean-Raymond and Founder of Pyer Moss, was the first Black American to present on the couture lineup in the Chambre Syndicale’s 150-plus year plus history. In fact, Jean-Raymond was the first black creator to be invited to the couture calendar since Patrick Kelly in 1988. It was with no surprise that within an hour of the call-out on social media, 9,000 people actively signed up to get access the 100 tickets available. In paying homage to black inventors, Jean-Raymond’s collection drew inspiration from a list courtesy of the Liberty of Congress. “I didn’t want to do this like a regular collection, I wanted to do this like Sesame Street and Pixar,” said Jean-Raymond. The designer’s collection features 25 looks that tie closely to 25 different black inventors throughout time.

One of the most memorable, if not the most important creations, looked to commemorate Madam C.J. Walker, who was the founder of hair-care products in the early 1900s. The runway show was nestled in the estate of the historic Villa Lewaro, once belonging to the beloved first self-made woman in America. Bountiful, tightly-wound curled hair-rollers and a vibrant orange ensemble honoured the beauty maven amongst the collection. The looks were quite literally camp at first glance, yet carried a story and personal connection to Jean-Raymond’s life experiences in 1990’s Brooklyn. Other notable looks included the Afro-American flag, the three-light traffic light and the Super Soaker squirt gun. Needless to say, a fusion of color and culture lit the room as Jean-Raymond’s creations came to life.

The collection served as both a reminder and fresh approach to showcase black inventors that showcased what may now seem as ordinary objects. Admirers have the opportunity to see the collection beyond the screen. In partnership with gallerist Nicola Vassell, an installation of each looks, will serve as an exhibit at the Walker estate this fall. Amongst the guests, the honorable Elaine Brown, a Black Panther leader and Jean-Raymon’s personal heroes, opened the show with a monologue focusing on Black empowerment. “We’re a platform. That’s what we do well, not just the clothes but the message, the story, and the whole community around it” said Jean-Raymond.

Fitted and silhouetted. A combination of lines, shapes and structured details played a strong theme in Balenciaga’s Fall 2021 Couture collection. Described as noble elegance, the lineup featured all from powerful black suits to bold draping numbers. Demna Gvasalia, the current Creative Director of the brand, sought to give a moment of silence to the late fashion house Founder Cristóbal Balenciaga during the show. Focusing on the importance and message behind Gvasalia’s collection, the designer revealed the most straight-forward response. “I realized it’s not about fashion — actually, I love clothes. I’ve been talking about clothes, clothes, clothes rather than fashion,” said Gvasalia.

Moments of black tailoring, denim, streamlined coats and the appearance of billowing oversized taffetas filled the collection. Almost like an ode to the 1940’s era of Film Noir, the looks featured red roses, broad shoulders, bow ties and embellished lapels. A segway into practical denim, tailored blazers, sheath dresses and sleek clutches naturally followed. The collection seemed to carry a monochrome and neutral color palette – right until veering towards the end. To finish, a burst of statement colors emerged via saturated jewel-toned pieces closed the show. Ultimately, the collection reveals large airs of confidence, comfort and promise from Gvasalia.

A dream-like state; the reveal of this collection was in absolute harmony with its setting. A melange of soft pastels and clean cuts gave way to sophisticated designs for this Fall 2021 collection. “In Paris, there’s an energy that’s so beautiful, so youthful, so fresh. Everybody is out. There is this kind of generosity of happiness and sharing – and being all together, and getting this lightness back again,” said Valli. The inspiration behind this show can be found in all that is synonymous with this Parisian sense of Joie-de-Vivre.

Hues of powdered pastels, tulle fabrics, draping capes and the appearance of chiffon set the tone for this couture orchestra. For music, Mozart’s “Lacrimosa” encompassed the mood while the muses of the show graced the runway. The color story and palette of the collection parallels the likes of a vintage carousel in Paris, or even a cotton candy held against a velvety sky. Strong standouts include feminine bows, high hair to the heavens and vast volume – that is not for the faint of heart. Just as that of eye-candy, appropriately named for its soft and sumptuous colors, we simply can’t get enough.

Renaissance for real, with all shades of the rainbow. Valentino’s Fall 2021 Couture release was a color palette to feed the senses. Set in an old ship yard in Venice, the opulent and ‘posh’ scenic roots were tied to Venetian Renaissance architecture–which can be seen as some of history’s most notable designs to date. Creative director Pierpaolo Piccioli’s collection can be seen as just the same. Blazing colors brought the historic setting to life. Did we mention that the guests were entreated to wear all white, too? Making the show a colorful phenomenal, like paint strokes strewn across white paper.

Intensely vivid color-blocking, surreal prints, circular micro minis and asymmetrical drapage were topped off with large Philip Treacy fluid-like hats that resembled life under the sea, moving through an anemone. Especially with the standout color of sea-foam green. Capes and crepe shirts alike played a major theme in the lineup of 84 looks throughout the collection. Distinct  shapes and textures personified a candy wonderland, or a gumdrop haven as the show veered towards its finale.

A favorite includes a cloud-like deep purple number paired with hot red leather-like gloves and clear heels for length. Another breathtaking standout was reminiscent of Grace Jones, as a bubblegum pink hooded dress accompanied with pink winged eyeliner stood out amongst the color arrangement.

The closing of a show was like a storybook ending, or a motion filled journey to the end of a rainbow.