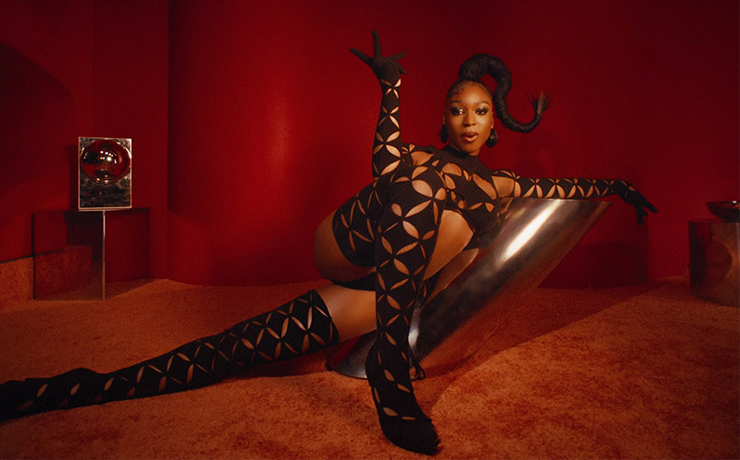 Portrait of a woman; a vision. Worth the wait. Normani, a dynamic powerhouse of this generation’s entertainment scene, casts a wave of late 90’s/early 2000’s decadence in new music video Wild Side. Admirers and Normani fans seemingly compared the video’s aesthetic, color story and visuals to that of Aaliyah (paying homage to that sample) , or a nostalgic favorite with a bit of a fresh twist. The music video’s editing style cohesively danced with the lyricist’s message behind the song, and truly took us on a ride. Normani’s ‘I popped up on the scene’ confidence and finesse are easily recognized throughout the track. Oh how we’ve missed her since her since Motivation.

With a video so enriched in detail, it’s impossible to only pay attention to just the outfits, choreography, vocals and storyline. So we’ll break it down for you, after hitting the ‘replay’ button over and over. Listeners are comparing the sound to a fusion of a subdued sample of One in a Million by Aaliyah and What’s It Gonna be?! by Busta Rhymes & Janet Jackson.

Hazy, mesmerizing monochromatic sets, jewel-toned matching ensembles and Normani’s glowing presence sets the mood for a captivating aura all her own. The rich tones of the set complemented Normani’s skin complexion, and exuded panache ambience as it skipped from sequence to sequence. When can imagine only when Normani was asked “How many sets?”, her response was simply “Yes.”

We love a referential and evocative moment. A leopard aviator-esque fit was something symbolic to early supermodel days, yet giving Ruby Rhod from The Fifth Element (1997). Whereas the silvery white embellished appliques during her ‘Gemini’ twin-type scene was inspired by Debra Paget in The Indian and the Tomb (1959) a serpent-like dance with eye-contact and vintage styled ‘bevel’ techniques. Tasteful, soft and sensual.

Normani is the type of performer to blend synonymously with her backup dancers, taking her craft seriously while still standing out and keeping your eyes locked on her. Not only is her RNB ‘smooth as butter’ voice pure, controlled and gorgeous, she is a true dancer in every sense of the word. A trait very reminiscent of past performers, where becoming a triple threat was something all entertainers strived for. The precision, dedication and specific theme throughout the ‘Wild Side’ video is not to go unnoticed.

The effort, thought and execution of the video is something to be proud of. It puts Normani in a line to want to keep up with, even more so than before. The team behind this production cannot go unnoticed. The steady, clean-lined choreography credits are due to Sean Bankhead, who has been behind makin’ moves for THE girls – Megan the Stallion, Saweetie, Doja Cat and Cardi B to name few. The iconic styling can be by an icon in the making – Kollin Carter, who noted that he wanted the artist to look ‘pinup yet edgy’ and The sultury, effotless glam courtesy of Fenty Beauty’s Priscilla Ono.