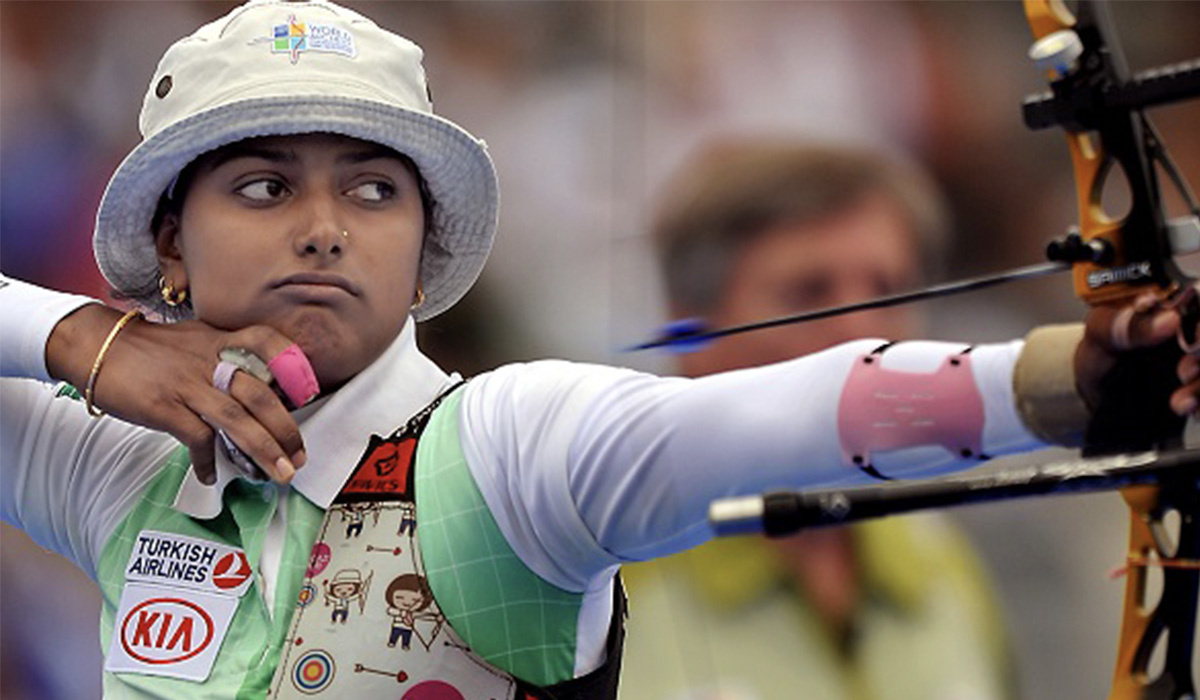 A real life Katniss Everdeen, Deepika Kumari is the Olympic athlete we’ll all be cheering for come the 2020 Olympics. At 18 years old Kumari was ranked the number one female archer in the world and at 23 had already competed in two Olympic games – London 2012 and Rio 2016.  The documentary, Ladies First (2017), follows the trajectory of Kumari’s career – her rise to the number one spot, her struggles along the way and the losses that have ultimately kept her pushing forward. Inspirational and resilient Kumari reminds us why it’s so important to champion women in sports everywhere.

At age 12, Kumari left her home in Ratu, India to attend an archery academy in Seraikella, at first knowing very little about the sport and simply looking for an escape to her life at home. Her family’s financial situation was difficult, her mother was paid inconsistently, sometimes going months without a salary, and her father’s income as an auto rickshaw driver was minimal. This often left the family struggling to make ends meet. Adding to Kumari’s desire for an outlet were the cultural expectations set on young girls in her hometown, in the film Kumari states that she is confident she would have been married off by 18, had she not found archery. Fearing this track she saw the academy as a moment to access a very different path for herself. But what began as a means of escape quickly became a part of her. Upon joining the academy Kumari’s interest in archery grew, she caught on quickly and she developed a forceful skill. However, honing her craft did not come without persistence and courage. She faced the strenuous training sessions many athlete faces when working to perfect their technique, but also the expenses that come with the sport. Struggling to purchase new equipment as she began to reach new levels often relying on her parents who were already struggling to keep up.

As Kumari grappled to secure funding for her gear and training she also had to cope with the added pressures that come with being a female athlete. While representing India in the 2012 and 2016 Olympics, Kumari was unable to bring home the gold and she returned devastated citing a loss of self-confidence. In the film one of her coaches explains the effect gender roles have on team’s confidence and the mental edge it gives other competitors. She states, “ In India the roles are clearly divided, this is a man’s job, that’s a woman’s job. Therefore, women lack confidence.” Kumari addresses how these expectations of what women should and should not do were prevalent throughout her upbringing. Her mother was sometimes beaten by her uncle because he felt it wasn’t right for a woman to work so much (her mother worked at a local hospital) and even after competing in two Olympic events neighbors in her hometown would still scoff at her mother for letting her play sports. But when it comes to those who say girls should or cannot be athletes Kumari states, “Often I feel like answering back, but then I feel if I respond with words, people might forget. But if I respond with my arrows, they’ll never forget.” *mic drop*

”I hope girls in India who face many obstacles look at me for inspiration to rise above their problems and fight to follow their dreams, to pursue their ambitions.”

Kumari hopes to be an inspiration to young girls and women in her home country. Discussing the limited opportunities for women who have grown up in her circumstances she states, “I hope girls in India who face many obstacles look at me for inspiration to rise above their problems and fight to follow their dreams, to pursue their ambitions.” The end of the documentary shows Kumari visiting her first academy and meeting a group of girls. The girls are in awe of Kumari’s presence and present her with a scrapbook of news clippings covering her career. Her impact on the next generation clearly evident.

Kumari is currently training for the 2020 Summer Olympics in Tokyo.