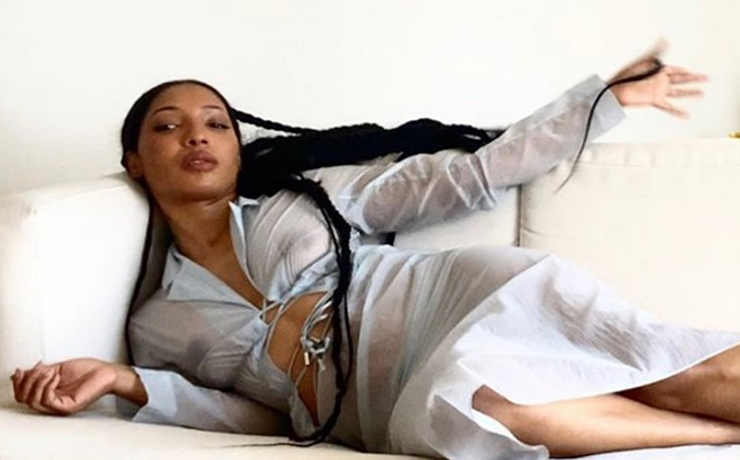 Ottolinger SS21 portrays a fantastical world of fashion and alchemy

Characterized by peacock blues, mango hues, and saffron reds, London-based designer Supriya Lele creates clothing delicately imbued with her Indian roots. The LVMH 2020 finalist rejects stereotypical tropes associated with Indian fashion, what she describes as the “very glitzy, Bollywood-y” style, in favor of a more subdued iteration that plays homage both to her South Asian background and her British upbringing.

Lele was born and grew up in Suffolk, a historic county in the West Midlands, England. The daughter of Indian immigrants and doctors living in a remote village, she felt more in-tune with the goth-punk and skate subcultures of the 90s as a teen, listening to Black Sabbath and obsessing over Helmut Lang (inspirations that shine through in her designs today). Though she visited India growing up and recalls in a Vogue interview being “fascinated by watching my aunties and grandmother putting their saris on,” Lele admits, “I would never feel like myself in a sari,” and desperately wanted to ‘fit in’ within her predominantly White hometown.

Over time however, Lele has grown to be proud of her culture and to express it in her own way, most notably through her reimaginings of Indian fashion and womanhood. Whether by referencing a sari blouse by her neon asymmetric bralettes or by using traditional Indian Madras fabric (a lightweight cotton with a colorful plaid design) to create bold orange gowns, Lele artfully “proposes a new idea of Indian femininity” with her looks.

Akin to other second-generation designers coming out of London’s burgeoning fashion scene today — like Priya Ahluwalia, Nicholas Daley, Osman Yousefzada, A Sai Ta — Lele’s designs address the complexity of heritage and upbringing between two distinct cultures. Best summarized by Lele herself in an interview: “I like to mix high and low fabrics together, whether it’s silk and rubber or mesh and tulle with Indian fabrics and clothes.”

The designer attributes her minimalist aesthetic with her initial interest in architecture. She enrolled into architecture at Edinburgh University for her undergrad but changed her course to fashion without telling her family. She then received her Master’s in fashion at the Royal College of Art with her MA collection catching the attention of Lulu Kennedy, director of Fashion East in 2017. Lele then deputed her eponymous label at London Fashion Week Autumn-Winter the same year.

Her brand’s first appearance on the runway was characterized by loosely draped sheer fabric dresses contrasted by tailored rubber jackets and use of Madras fabric from everything to blazers to co-ord pieces. And this nod to India is continued in her Spring-Summer 2020 collection.

For the photography of her SS20 collection, Lele took a trip to India with photographer and friend Jamie Hawkesworth in December 2019. The photos posted to her Instagram are ethereal, with her block colored designs tailored into sari-like silhouettes contrasted by a misty haze obscuring Narmada River in Madhya Pradesh — the river, in fact, where her father’s ashes were scattered upon his passing.

The photographic project quickly became a highly personal and emotional journey for the designer: “We visited this holy river where my father’s ashes were scattered and it was so moving to see my work and interpretation of my heritage, which has previously only been shown in Europe, resonate and retain the same narrative there.” For Lele, the trip “was like a homecoming,” she said in an interview.

Whilst delicately expressed through her work via silhouettes, her use of draped translucent fabric, and string moments (like that often found tying the blouse of a lengha choli), it appears as though Lele’s trip to India confirmed the impact the country had on her aesthetic through the years.

Lele’s fashion consciously sits on the cusp of multiple cultural languages, in-between British and Indian, two cultures she felt in someways excluded from as a second-gen immigrant. Her complex pieces are a product of this uniquely crafted identity. And with a midriff almost always in sight in Lele’s designs, her work is both a nod to the iconicity of 90s fashion and to one of South Asia’s most recognizable garments.