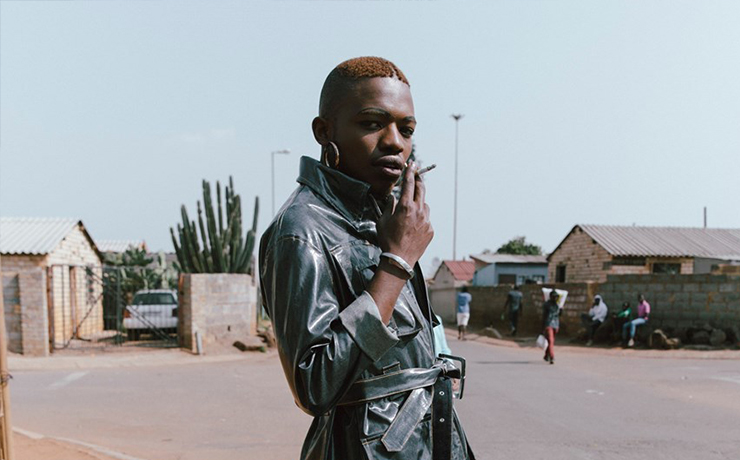 Growing up in Umhlanga, a small town in South Africa, feeling invisible almost felt like second nature to Desire Marea. This taught the multidisciplinary artist to forge their own identity and value themselves beyond “colonised social constructs” – such as gender. For them, art is a medium to empower other queer, Black identities who also live in a country with a history of gender-based violence, racism and segregation. Through FAKA – the art movement founded with their best friend, Fela Gucci – they challenge the limited representation of people who fall outside of the widely accepted ‘normalcies’.

Choosing music as their main vehicle, the duo combines photography, dance and fashion to relay powerful narratives. Desire has since used the same blueprint to explore themself sonically through the release of their solo eponymous debut album this past January and it’s live re-imagination more recently.

Drawing from life-altering experiences, the 9 track album delivers sounds emblematic of their journey. In a manner that can only be described as transcendent, the album emanates the artist’s spiritual DNA and self-healing. Simply stating “it feels like one of those things that just had to happen and started happening way before I consciously started making the album.”

We spoke to the artist about their fashion identity, making the album and reclaiming African identities.

How was your journey to self acceptance?

It was very difficult as there was self love that I needed to embrace. At a point, I was surrounded by people who embraced my sexuality, which was empowering but as soon as I wanted to devote more to certain parts of myself, I lost them. It was an alienating process, but it strengthened my faith. It turned me into an independent person who doesn’t rely on external validation.

What role does music play in that?

I feel like the arts are the only language I have access to. When you don’t have the vocabulary for what you feel or have been through – and you have the gift of healing through music – that becomes your language. It’s really liberated me to feel like I’m able to articulate myself, and that actualisation is amazing.

Is that what led to FAKA?

The first thing that we connected on was fashion. In 2010, I had never met anyone that loved fashion like me. We soon realised the entire spectrum of the arts was something we were both really passionate about. Fashion has a really strong role in connecting you with your identity – it affirms it in many ways.

How do you think growing up in such a small town influenced your identity?

It felt limiting in a lot of ways. There was always a sense of wanting to experience something that I didn’t have access to. When you come from a poorly documented place that not a lot of people know about, it’s kind of up to you to know that you matter and that you come from a special place.

What inspired you to make an album?

I had a life-altering experience in 2011 and immediately after that, I was exposed to music. I had never made music before but it started coming in. So, I wrote and made instrumentals for a few years. 8 years later, I lost my hard-drive with a huge chunk of music and I was only left with what was on my computer. That became a process of understanding myself: literally listening back to myself from 2011 to 2019.

There’s an authenticity to your music that almost feels transcendent.

I personally enjoy music that takes me on journeys. I like music that you have to actively listen to: music that speaks to your soul first before your mind can process it. It’s a different way of listening.

Music is so powerful, but people don’t respect it anymore. It is now used to perpetuate consumerism, which has lowered the vibration so much.

It’s always just about finding the truth in what the song is about: whether it’s a stylistic element, a lyrical one or the instrumental. The rest of the song then becomes a meditation on that to make it shine more. Making sure everything is all in concert to uplift that specific truth.

The most constant thing for me is remaining ready for inspiration when it arrives. Having all the equipment and being in a state of mind that allows you to interpret whatever you receive, whenever you receive it. There’s an ongoing process of wellness that’s very important for that level of self-awareness.

Do you feel like there are limitations set for you as a queer artist?

Yes, until we were visible and we told people that we mattered. We shared our work regardless of people constantly sleeping on us and opportunities not falling into our laps. But there’s still a lot to be done. Especially on an economic level. Not having the resources to create puts you in a very weird position regardless of your identity. But that mostly affects Black and Black, queer artists.

Navigating queer identities in Africa can be extremely dangerous. What’s your experience with this been?

I won’t deny that it’s dangerous, but those dangers can be mitigated if you can limit your contact with the world by not necessarily having to be in public spaces. But that’s a privilege. To enforce the constitution that’s meant to protect us relies on an economic power that a lot of queer people don’t have. Especially in an unequal society like South Africa – It’s always linked.

People can be very condemning of identities that don’t align with their ideologies.

Yeah, and they have very violent ways of reflecting that. There’s a huge effort that Africans need to put in to educate themselves. It’s also linked to decolonialising knowledge because gender and the ideas that shape how we look at identity are very much colonial thoughts. More needs to be done to decolonise our information, faith and cultures.

I told different people at different times but that doesn’t necessarily end with “it’s fine”. There are still conversations I’ll like to have around the gendered nature of how society is structured. It being so patriarchal can be violent and that makes a lot of homes unsafe. So, I’d like to have conversations on how we can make a neutral space for myself and any other queer person on a cultural level.

Zulu culture is very unsafe for anyone who falls outside the gender binary. It’s structured around specific rights of passages for young girls/boys who are being welcomed into adulthood. Yet, their definitions of what makes a young “man” or “woman” are flawed, transphobic and alienating. Most of the rights of passages are customs that men do at a family gathering like weddings or funerals. It’s segregating down to the body parts you’re supposed to eat as some parts are reserved only for women/men. The entire experience was always traumatic for me and I just dissociated.

Who are some people that inspire you?

I’m inspired by the music of the Shembe Church, founded by Isaiah Shembe. He incorporated a lot of things that were demonised about African spirituality at the time and merged them with Christianity. That kind of audacity is something we should be approaching our life and cultures with – even if our cultures are queerphobic or transphobic. Just the idea of creating your own movements to that scale is amazing. (And so is the music!)