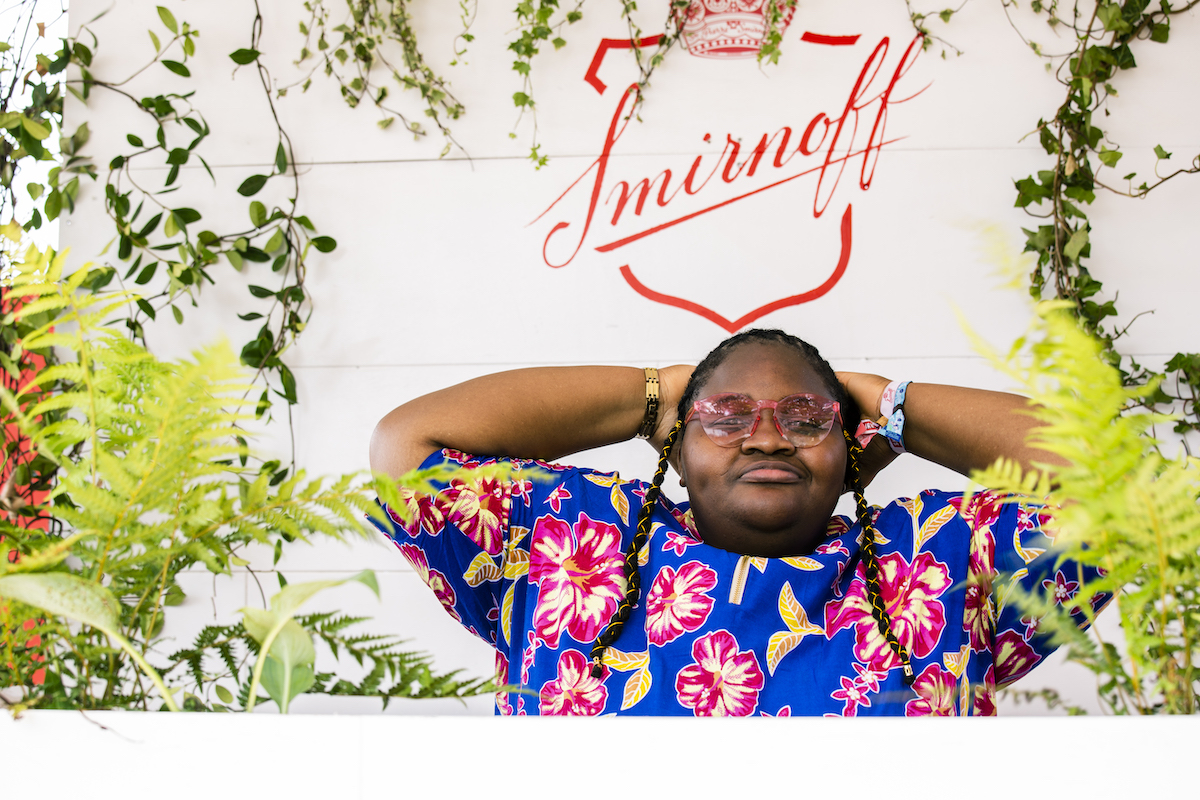 The Lion King: The Gift Compilation Album Curated & Produced By Beyoncé Is Truly A Gift

It’s not often you meet a woman as enigmatic and in touch with her spirituality as Marie-Solange Ndeley; a.k.a. DJ SheGotSoul. With an impressive 10-years’ experience in the DJ’ing game, it’d be an understatement to say that she’s got a knack for brightening the energy when she walks in the room. NBGA got the chance to sit down with Gal-Dem’s resident DJ for ethereal chats at Lovebox Festival, just as she was winding down from setting-up the celebratory atmosphere in the Smirnoff tent; with a set full of funky old-skool goodness. It gets emotional, as we talk about loss, love and how music serves as the ultimate expression of the human experience!

How was your set?

It was amazing, and such a spiritual moment for me. I wouldn’t expect you to know this, but unfortunately, my mother passed yesterday morning in the hospital. We had spoken about me getting the chance to perform at Lovebox for so many years now, and this is a dream that she really had for me – one that she really wanted me to fulfill. I’m here in the sense that this is something that she wanted me to do, it’s something that she really would have been proud of – so right now it’s feeling extra special to me. I have to say, during my set, I felt her spirit there with me all the way through – there were so many people who came up to me before, during and after my performance just to congratulate me on keeping the vibe so light and positive in wake of recent events, and for me there was just so much emotion behind what I was doing up there. It was so nice to see people really feel the emotion behind what I’m doing – it just goes to show why I call myself DJ SheGotSoul because it’s all about the emotion and the intent behind the music.

Are you quite a spiritual person?

I am for sure! I’d say I follow Christianity but from a contemporary perspective, where I know and believe my creator has put me here for a purpose, and it’s my job to try to understand that purpose and live it out to the best of my ability. I think that idea is something that I carry with me throughout my music as well, someone even pulled me aside today and said “I felt your journey, I felt all the emotions throughout you’re whole set – it was so uplifting” and that’s the most rewarding feeling – that I can use my understanding of spirituality and music to affect people in ways that they want to be affected.

Would you say that’s the reason you DJ?

Yes! I’ve been doing this for about a decade now – and I know the hard work that goes into every aspect of being a good DJ. That feeling though, when I’m up on stage and watching the crowd feed off the energy, I’m giving them…it’s electric, it’s undeniable! This is my passion, the way that I express my love for music – and that love for music runs very deep.

When did your affinity for music begin?

I’d say my love for music physically manifested itself when I was two years old! I’m sure my mother would tell you; we have this famous story in my family where we used to own a Jazz Club in London that would mainly showcase Cameroonian artists. So, one night I managed to escape from my babysitter and sneak downstairs in my pajamas, I crawled straight onto the stage, picked up a microphone that was lying about and began singing my heart out! Everyone was like – what the hell is that toddler doing on stage? I’d say that’s a good analogy for my lifelong affinity with music, it’s something that I’ve grown up with – especially since both my mother and grandmother are talented musicians in their own right.

I want to know about your mother’s music, and what it was like growing up in a musical family?

Well my mother was a gospel singer, and she was very much influenced by Fela Kuti; she knew him very well. I think my mother and my grandmother have always had clairvoyance about them – they were the perfect role models who were eager to keep me on the right path.

Can you describe your sound in three words?

Yes! I’d say my sound is very eclectic – I’m open to playing to the crowd as I have an ethos of educating people about music that they may feel isn’t relevant anymore. So, I’d say it’s also a little old-school because of that aspect of wanting to put people onto lesser-known music that is timeless – I’m no stranger to playing songs from the ’60s, ’70s, and ’80s. Lastly, I’d say my sound is uplifting – at least, that’s the intent. My set just now at Smirnoff was full of funk, soul and disco music; but the underlying theme of it all was love.

Is there anyone you’re excited to see perform at Lovebox today?

I’m excited to see my namesake Solange – I’m just in awe of the innovation she brings to the stage! It’s interesting because I feel as if some people didn’t quite understand what she was trying to do when she first came out – and now she’s headlining festivals all over the world! It’s just so nice to see her making room for herself and all the while sharing with us her very real, authentic human experience through musical expression – it’s amazing!

What’s your favorite album of all time?

Man, I’m a Gemini so I don’t tend to have favorites – it’s always changing. I’d say the first time I listened to Baduism by Erykah Badu was pretty life-changing though. I was like wow; this woman is clearly on a different emotional and spiritual level! That’s the kind of stuff I’m drawn too – people like Andre 3000, NAO, Indya Arie –I think music is all about taking our human experience and making art out of it!

Do you have any interests/unusual hobbies outside of music?

Yes! I’m also a film-maker, writer and director! I graduated last year from LCC with first-class honors and my most recent film came out in 2017, it’s called “Next To Arabella”. It’s a powerful story about a man going through the early stages of dementia, who is struggling to reconcile with his wife before he loses a grasp on his memories. It’s filmed in such a way, that we – the audience – can relive moments of his past with him, in piecing together the overarching message as the film progresses. It’s quite emotional. I’m inspired by people like Spike Lee, Menelik Shebaz, Julie Dash and Eva Duvernay; people who speak truth to power within their cinematic innovations.

What do you have planned for the rest of the summer?

I’m going to take it easy, I’m chilling. Obviously, it’s an emotional and interesting time for me in light of yesterday’s events so, I’ll just be focusing on my mother and unpacking everything I need to get through to keep progressing in a healthy way. However, I’ll be working on some films about the heritage of Black British film-makers, and within that project, I’ll be getting to know some up-and-coming contemporary Black British filmmakers; to highlight the important discourse between our history and our reality now. In terms of DJ’ing – I’m currently representing the Gal-Dem as their resident DJ. I have to say, shout out to Liv Little and Charlie because the work that those women do is amazing for the culture and our community – it’s a rarity!

What are your Top 5 festival essentials?

I’d say as a DJ you need to make sure you bring your headphones (+a spare), you’ll need your USB’s, your mobile to make sure you can communicate effectively, some business cards and a camera to capture all the memories! Oh, and a good atmosphere – that’s super essential!