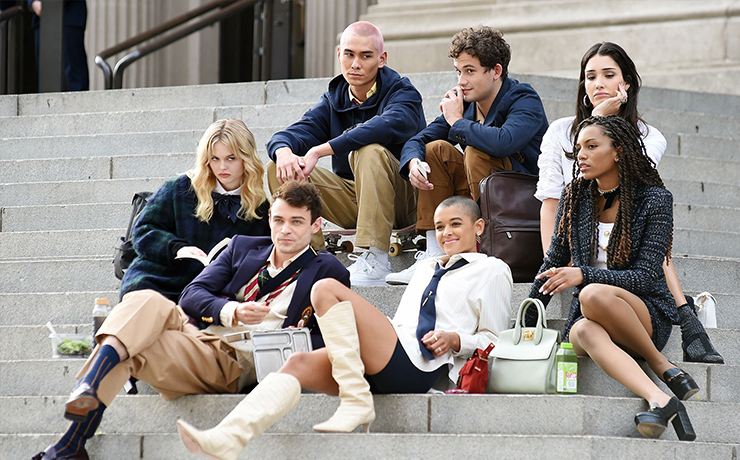 Images Throughout Courtesy of The CW

A secret streaming giant HBO Max will never tell – might just be the admitted short-comings of their highly anticipated Gossip Girl reboot.

The original Gossip Girl debuted in late 2007 on The CW – just as teen dramas were at their absolute peek. Following the sensational lives of the scandalous Upper East-siders (the epitome of champagne problems and caviar dreams) all the while being under the omniscient gaze of anonymous blogger extraordinaire: Gossip Girl. The characters’ daily debacles included having the excess of riches and seeing the world through glamorous lenses; politely paired with a concoction of teenage toxicity and revenge-filled romances. It was a salacious television universe where everyone dated each other’s exes, friends, siblings – and even nemeses for that matter.

One of the show’s most decadent elements was the notion that Gossip Girl was never meant to be taken as a serious introspective mystery. Rather, it was an intentional ridiculous soap opera that prided itself on being a proclaimed guilty pleasure. The audience was in on this joke and loved how the show forged the realm of morals and actions having consequences. Millions of viewers understood the context and critiques of satirical conspicuous consumption, being well aware that it was not scientifically possible for the wicked egotistical Chuck Bass to exist in this world and have such easy access to a getaway car, among other things.

But it wasn’t just the sheer appeal of dramatic fantasy that had audiences tuned in, a pinnacle piece of the show was inevitably the fashion. The styling was influential for it’s time, having a major impact on trends. This was definitely the case for Blake Lively’s character Serena. She embodied the style era of the Olsen twins – fashion forward trends mixed with a dash of “I just rolled out of bed and stumbled into my Alexander McQueen dress!” On the other side of that, we had Blair Waldorf; the Queen Bee who represented WASP’s everywhere with her tailored dresses and perfect headbands. Ah the 2000s. This sense of fashion evoked a time when all the fashion inspiration could be found within magazine spreads and had classist roots of inaccessible pieces.

This era of technology was a pinnacle factor in the success of the program. The lives of the Upper-East siders were merely documented through Verizon flip phones and carefully crafted blogs. So when a character found out a piece of bombshell information, it was like the world stood still. That pixelated picture of Nate and Jenny kissing acted as a golden ticket into the gateway of popularity. Stories at the time were exclusive and secrets were kept under wraps for as long as possible. Lives were kept private and the notion of Gossip Girl was to expose these secrets and amp the scandal.

This theme echoes the tabloid culture that dominated the media at the time. Magazine covers that sold depicted damaging rumors and accusations against celebrities, most often with the target being women. It was a time where people loved to witness a train wreck, and paparazzi were constantly looking for the next tragedy around the corner.

Fast forward to 2021 here comes the parade of the new Gossip Girl, still with super rich kids of course. The new kids in town technically fall under the umbrella of generation Z – an indicator of hyper self-awareness and investment in online culture. As a result of growing up in this atmosphere, the characters are more attuned to an intersectional view of the world. Nowadays people live their entire lives online and are tapped in daily discussions of political news. And with the rise of platforms such as Instagram and Twitter, there is no such thing as skeletons in the closet. Users choose to document every move and every thought, in aims to bring internet clout and build an image. It’s a digital culture that thrives on over-exposure and transparency.

Instead of wilding out like the former characters, the newer Gossip Girl reflects the era of carefully constructed online personas. Take main character Julien Calloway for example, she acts as an influencer posting Instagram stories about which lip gloss to wear. And instead of having minions do her dirty work like Blair Waldorf did, the new minions are in charge of managing her social media page and styling her – making sure followers are engaged and that the like count is thriving. It’s all about constructing an image of goodness – and less about the stages of catfights.

The way these kids grew up in the age of social media is reflective in their fashion too. Instead of opting for the world of logo-mania and wearing pieces fresh off the runway, even the choices of clothing are conscious. A tell-tale sign of the generations’ take on fashion is their preference for streetwear-orientated pieces and second-hand designer goods. They use clothes by means of communicating social values. So a vintage Fendi baguette bag and Adidas sneakers translate into a dialogue of sustainability and identity. The clothes aim for authenticity, yet fall short of signifying the characters personality.

This conscious construction also mirrors the motives of Gossip Girl. SPOILER ALERT: the identity of Gossip Girl is revealed minutes into the pilot, the tormented teachers led by Kate Keller. The aim? To teach these kids a “lesson”. A group of teachers form this alliance to hold the students accountable for their privilege and entitlement. Really driving the stake of cancel culture to earn some respect. You’d think most teachers would be able to let things go outside of the classroom, but the vendetta they have borderlines on creepy and is way too serious. They treat the entity of Gossip Girl as if she is going to lay down the law.

Although the intentions of the reboot are pure aims of inclusivity, it misses the punch the original had. The show highlights important issues and has a much more diverse cast, but the dialogue of the teenagers themselves is out of touch with how teens actually communicate with each other. Being a product of a social media environment, you expect the characters to still have that quick-wit and snappy speech. Maybe even find themselves in some controversial moments and biting their tongues in trouble – yet still having productive conversations or memorable scenes of character growth. Instead, it’s an over compensation of the woke generation. Too much damage control and not enough damage on screens.