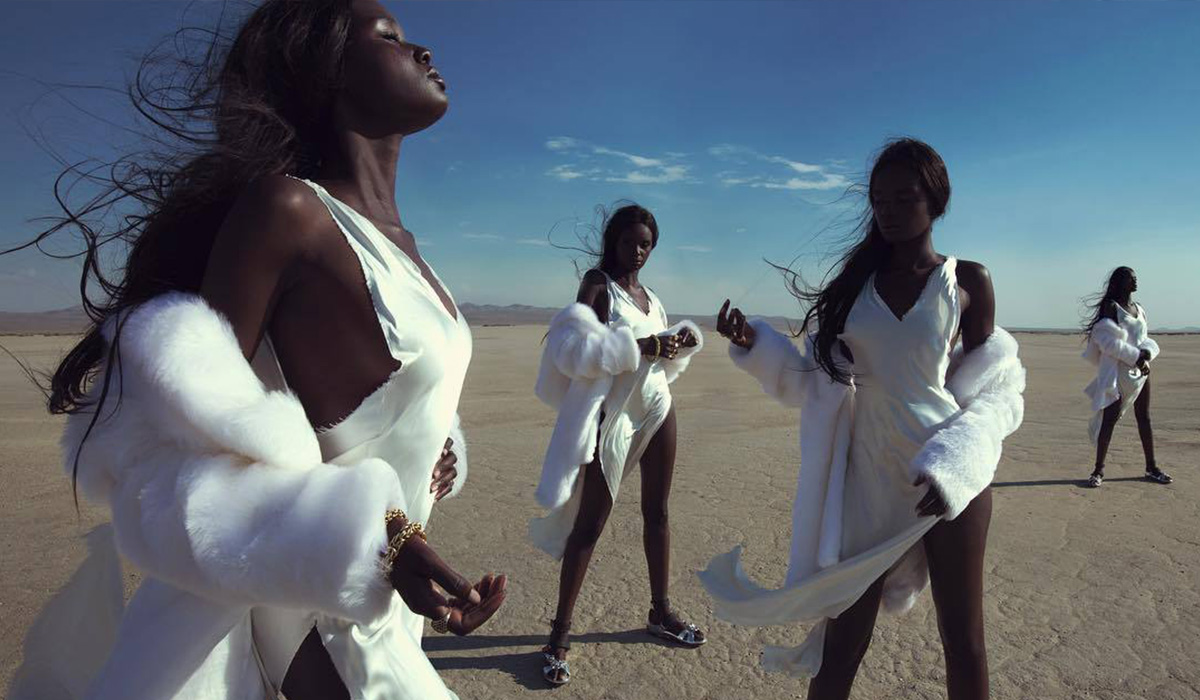 Often referred to as a “real life barbie” Duckie Thot, 22, is the Sudanese-Australian model popping up on everybody’s radar. The model, who is signed to New York Model management and D’Management Group, has shot campaigns for fashion houses Oscar de la Renta and Moschino as well as graced the pages of magazines like Vogue Italia and Vogue India. She first gained popularity while a contestant on Cycle 8 of Australia’s Next Top Model back in 2013, but has actively been building her resume since leaving the show. And although she ended the cycle in third placed, I think it’s fair to say it hasn’t held her back.

Duckie’s introduction to modeling was through her big sister, Nikki’s, whose own career in the modeling world influenced a young Duckie. Nikki, now a YouTube star in the sisters’ home country of Australia, used to have Duckie accompany her on shoots, which slowly introduced her to the industry.

Duckie, now a part of Rihanna’s trusted crew of Fenty girls, which includes fellow models Paloma Elsesser and Simone Thompson aka Slick Woods, has become come a staple within the brand’s advertisements. First appearing in teasers for the line’s Pro Filt’r foundation, then for their Stunna Lip Paint and Galaxy palette. But now you can also catch Duckie flexing her modeling skills while glistening in Body Lava, one of the four products Fenty Beauty recently dropped as a part of their Beach Please collection. It also seems that the model has won over a special place in Rihanna’s heart, as the singer chose Duckie to be a part of her onstage entourage during her 2018 Grammys performance earlier this year. But Ri isn’t the only one taking notice of the striking supermodel. In recent months Duckie has already been asked to take on major covers for both Paper and ES Magazine.

The model is also helping redefine the beauty norms of the fashion world and paving the way for more diversity within the industry – often using her newfound platform to speak on the matter. Previously she has stated, that she still can’t be certain of whether a makeup artist on set will have the correct products for her skin tone so she often brings her own products to shoots as a precaution. Pointing out the work that needs to be done on the industry’s side – making sure they are not only featuring diverse set of models, but providing behind-the-scenes teams that have the tools and knowledge for working with varying complexions.

Additionally, the model involves herself with projects celebrating other black artists and was recently part of the 2018 Pirelli Calendar, which featured an all-black cast. For the shoot she shared the spotlight with mega stars Naomi Campbell, P. Diddy, Ru Paul and Adwoa Aboah. Highlighting the importance of representation further, when she was named one of Harper Bazaar Australia’s Women of the Year in 2017 she stated, “If I can continue to challenge the norm of what it means to be beautiful, I’m helping a beautiful little black somewhere out there”. #YesAllTheWay.

Whether she’s teaching us how to strike a killer pose or showing us what fun a little (or a lot) of body glitter can be, the supermodel is rockin’ the fashion world, and this is only the beginning.