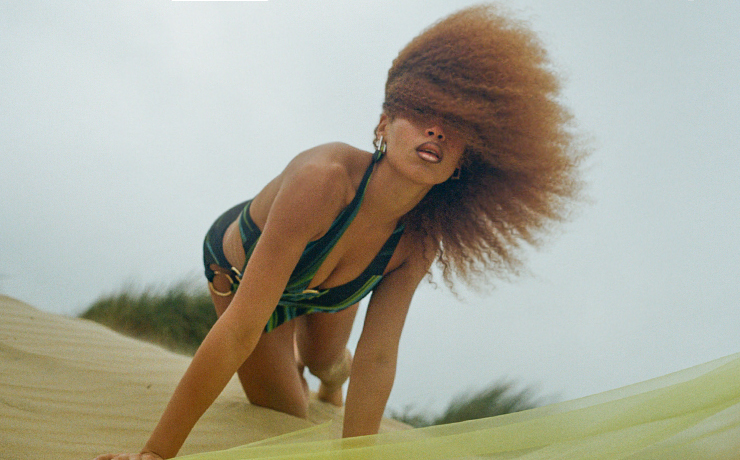 By Kiran Gidda for NBGA

Nigerian-born, London-based R&B/neo-soul artist Chi Virgo emulates a wise and radiant darkness. Demanding your attention without ever asking you for it, she’s the woman you couldn’t take your eyes off of in that one campaign. Ex-competitive chess-player, modern fashion model, Chi exists as an artistic figure on the crossroads of multiple energetic intersections. Self-described as witchy and vampiric, Virgo is loyal to the hushed, introspective magic of night-time — not surprising, considering the tired, silk quality of her voice. It’s usually under the electric glow of the moon that she’s her most creative, releasing daytime reflections onto tracks like “Bored,” and “Thinking,” tracks that are all cool-headed, emotionally assertive, yet still existing on the softer side.

“Bye-Bye,” produced by NEY LIQA, is an honest, airy track that gives us a taste of what we can expect on her upcoming EP that’s in the works. Even when she’s saying goodbye to something, it’s not exactly submissive. It’s a self-aware movement, a departure towards better things. NBGA chatted with Chi about her childhood shy streak, the playful power of analysis, and her first full-length project that she hopes to share before the end of the year.

TELL US ABOUT THE ORIGINS OF YOUR LOVE FOR MUSIC.

I was about four or five and I was just constantly making noise. It got to the point where my family had to tell me to be quiet. My brothers would be like, “Shut up. You’re being too loud.” But I was really super shy when I moved to the UK. I just constantly had stage fright.I never told anyone that I could sing. Then at uni, I started writing songs and just reviving my interest in it.I didn’t take it seriously until I moved to London, then I started having studio sessions and all that stuff. So, I fell out of it and then fell back into it. It was very organic. I like the way it happened to me.

WHY MUSIC, OF ALL THINGS? DID YOU EVER EXPERIMENT WITH OTHER MODES OF EXPRESSION?

I was really into drawing still lifes and faces when I was younger. I tried dancing, too, but I don’t think it was a form of expression for me. It wasn’t expressive for me. It was more of an action. Music is an outlet. I can write about my emotions and how I feel and it makes me feel lighter. Whereas dancing is an exercise. Painting, I feel like it has to look like this, it has to be like that. It doesn’t feel like anything is being released. That’s why I love music so much. It’s more cathartic, less surface level. I don’t even think. I just do and it happens and it releases everything.

IN WHICH PLACE OR MINDSET SHOULD SOMEONE BE IN WHEN THEY LISTEN TO YOUR MUSIC FOR THE FIRST TIME?

ARE YOU PLANNING TO RELEASE A FULL-LENGTH PROJECT?

Yes, I’m releasing an EP called Under the Moon. Some of the songs I’ve previously released will be included and then there are a few new ones which I’m super excited about. I called it Under the Moon because I get a lot of inspiration from the moon. I just like her energy. I’m quite a night-owl. I write a lot of stuff at night. I write in the darkness. Everything I’ve written is under the influence of the moon. I love it. I was on a video shoot once and someone came up to me like, “You give me vampire energy,” and I was like, “Oh, okay.”

I don’t think so! I’m just a bit lost all the time. I think people like to see me staring at the space and like, “What’s wrong with her?” I was like, “I’m fine.” I’m just not thinking about anything. I’ve learned not to think. I used to think a lot. I used to overthink too much. I’ve become a lot more mindful. I live in a state of nonchalance.

I THINK YOU’RE ONTO SOMETHING. THE MYSTICS TALK ABOUT THAT.

Thank you! Yes, all of it is very feminine energy. I feel people don’t realize how powerful the moon is because they’re always sleeping when it’s out but it’s the thing you’ve got rejuvenated when the moon is out. If you’re actively using it as an energy source, I think it’s super powerful.

DO YOU USE HEALING CRYSTALS?

I have crystals in my room but I don’t necessarily rely on objects at all. I use the objects more as symbolism. For example, Kali, the Hindu Goddess, is the sacred feminine. I love what she represents. I don’t necessarily believe in the deity but I believe in worship. I don’t rely on anything for my spiritual practice. Everything comes from me. We’re all going to the same place. It’s just about how I choose to guide my path. Knowing my truth is the most important thing for me. I’m not going to try for anything. If it comes, it comes. The same thing with my music. I never force myself to write.

IT’S ABOUT BEING IN A SPACE WHERE YOU CREATE FOR YOURSELF. NEVER PUTTING MUSIC OUT TO SATIATE PEOPLE OR EXTERNAL DEMANDS.

Yes! There are certain things that I experience that I don’t necessarily write about. I feel like that just means that it’s not what I need to be writing about. It’s maybe not that deep for me at that point.

I suppose one of my muses is love. I love writing about love. It’s the easiest thing to write about. Everyone gets love. Everyone knows love. I guess that.

WHEN I WAS LISTENING TO “BYE-BYE” IT FELT LIKE IT WAS ABOUT LOVE BUT ALSO THE DISSOLUTION OF IT. THINGS ARE FALLING APART AND YOU CAN’T BRING IT BACK TO WHAT IT WAS, SO YOU SAY GOODBYE. IT’S VERY SELF-RESPECTING.

Self-love comes first and once you’ve got that down nothing else matters. It sets the tone for everything else. If I didn’t have love for myself, the music wouldn’t come up the way it does, but that’s the big thing for me. It took me a long time to truly accept myself but once I got that down, that’s when my style started coming out.

ARE TRANSPARENCY AND BOUNDARIES SOMETHING THAT YOU PRIORITIZE IN YOUR PERSONAL LIFE? OR IS IT EASIER TO ARTICULATE THOSE THINGS IN THE MUSIC ONCE YOUR HEAD IS CLEAR?

PEOPLE TALK ABOUT BOUNDARIES A LOT.

People are nervous because there’s a lot of toxicity around and you can fall into that toxicity so easily. But when it’s real, it’s real. I’ve been with my boyfriend for five years. We didn’t set boundaries or have huge discussions and this is why I love transparency. If I do something that he doesn’t like, he’ll tell me. And through communicating with me, I get a natural sense of his boundary.

I KNOW YOU EDITED AND DIRECTED THE VIDEO FOR BORED. WHAT INSPIRED THE VISUALS?

I like nature and I love putting that element in my work. I just wanted it to emulate me. I don’t know if you saw the bit where I had the third eye. I had fun with it. Flowers, femininity. I wanted to feel like I was speaking from my mind so I had the jellyfish just like my brains. I guess I wanted to look at everything that I like to see. I don’t know if that’s self-centered. I wanted to live out a daydream in the video. When I was editing it, I didn’t have much structure. I just winged it. I like pretty things.

DESCRIBE YOUR AURA IN THE THREE BEST WORDS YOU CAN THINK OF.

I feel I’m very analytical. I feel that’s super important being able to analyze situations. That sounds so boring. When I was younger I was a bit of a nerd and I think that helps me with everything that I do. I used to play chess very competitively, like travel around the UK to play against people. But it helps me now, a lot. I know to walk into a room and even if I don’t know anyone, I can be comfortable, I can observe. I see the room almost emotionally and I’m able to do what I need to do. I mean, with other people. I can sense if someone’s being a bit awkward or uncomfortable and I always try to go check them out, I try to bring them into where things are happening.

I LIKE THAT ABOUT VIRGOS. THEY ALWAYS HELP THE UNDERDOG. LAST QUESTION: WHAT ARE YOU WORKING ON NOW IN THE MANIFESTATION REALM?

I’m actually working on my second EP! I’ve got all the tracks for the list. I’m doing all of the mixing and refining a few bits. I’m so excited about it, I feel like it’s more me. I’ve gotten a lot more comfortable with writing music, being in the studio, self-expression. This one is a lot more honed into my true self. Do you get what I mean?

I feel my first EP, the one I’m releasing next, was much more experimental. I’m still experimenting but it’s with a lot more purpose. I know what I want it to sound like and what I’m trying to say. But I’m just going to go with the flow with it, I don’t ever want to rush anything. I’d love to just let it come at the perfect time. With COVID, I got so nervous, I thought my plans to release music were ruined, but it was actually the most perfect time for me to release things. People were at home watching. It was perfect for me. Terrible situation, but that aspect was perfect. I’m glad about everything.

You can keep up with Chi Virgo on Instagram.