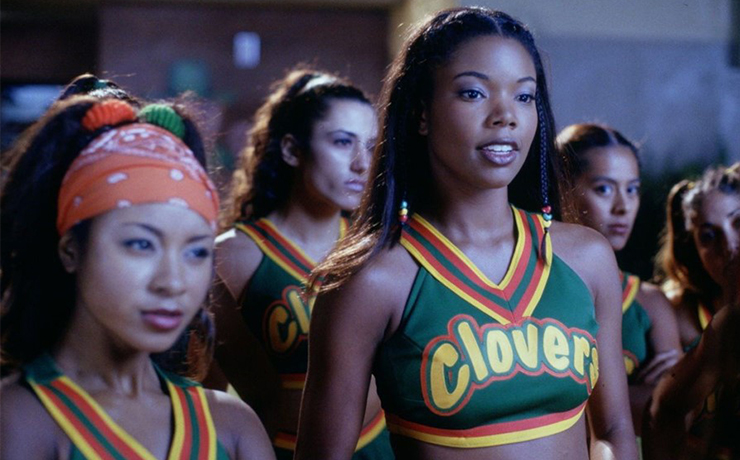 Roll call! It’s been twenty years since the premiere of Bring It On (2000), the cult classic cheerleading comedy that has remained a cultural favourite to this day. Although not every aspect of the movie has aged gracefully, the fashion and issues tackled throughout the film’s storyline back then are still very much relevant to those who watch the film for the first time tomorrow. The film’s premise surrounds the issue of white people taking credit for black people’s ideas in the format of a champion high school cheerleading team discovering that its previous captain plagiarized all of their best routines from an inner-city school.

Nevertheless, the representation of Black girls ― specifically, dark skin black girls ― still holds a huge amount of significance today. The Clovers aren’t depicted in the film as angry or bitter or simply trying to cause a scene. They are understood by the audience as justified in their anger and are shown as hardworking, mature, and sophisticated. Their talent is at a high and so is their threat-value. This is significant. Oftentimes, dark skin black women are depicted as angry, overdramatic, loud, and even less desirable than their lighter skinned peers. This movie could have easily found a way to discredit The Clovers’ anger and make them out to be overreacting antagonists, but they don’t.

Aside from giving us a lot in terms of cultural commentary, Bring It On also has an important role in the fashion trends of today. The clothes worn throughout the film still don’t seem dated whatsoever. You could probably come across many similar outfits on your walk to work or to campus. In her interview with Refinery29, Mary Jane Fort, costume designer for the film, stated: “I really tried to make it as authentic as I could for that age, at that time, and not be too trendy. I wanted something that could hold up.”

Another pattern in the movie is the use of head scarfs and bandanas on the characters. These accessories were used to their advantage in this film by making sure that whatever they had on their head matched their outfit perfectly. A great example of this is the spirit stick scene with Torrence wearing a red bandana to match the red accents in her outfit.

It seems like the clothes each character wore explained their personalities before they ever said a word. The clothes acted as unspoken language between the costume designer and the audience. In Missy’s (Eliza Dushku) character intro, we can see from her appearance alone that she is going to be a group outlier. She was darker, grungier, and slightly more promiscuous, wearing clothes reminiscent of the Kurt Cobain era of the 90s. And, you can take all of that from her clothes alone.

Now, of course, we can’t speak on the fashion of this film without mentioning the iconic cheerleading outfits. Fort mentioned to Refinery29 that they were very strategic when it came to designing the uniforms. They purposely chose the colors red and green because they contrasted perfectly where they wouldn’t blend right in. The two teams can be in a scene together and you’d be able to tell who the Clovers are and who the Torros are. “The two uniforms had to work together,” Fort stated. “They had to complement each other without matching, without competing, and they both had to be noticeable.”

Each outfit that the characters wear in Bring it On is timeless and could be seen today without question. For instance, Isis’ tie-dye outfit in the film is being worn by tons of girls recently, especially this summer. In addition to that, there has been an influx of athleisure styled outfits worn by celebrities like Bella and Gigi Hadid. Baby tees, cropped jackets, baggy, low waisted pants, and biker shorts are all seen in the film. This raises the question: What is original? Is anything original, or do trends just escape from time capsules? Whatever the answer is, I think we can all agree that, apart from the fashion, what Bring it On did for Black girls everywhere with The Clovers is something to commend.