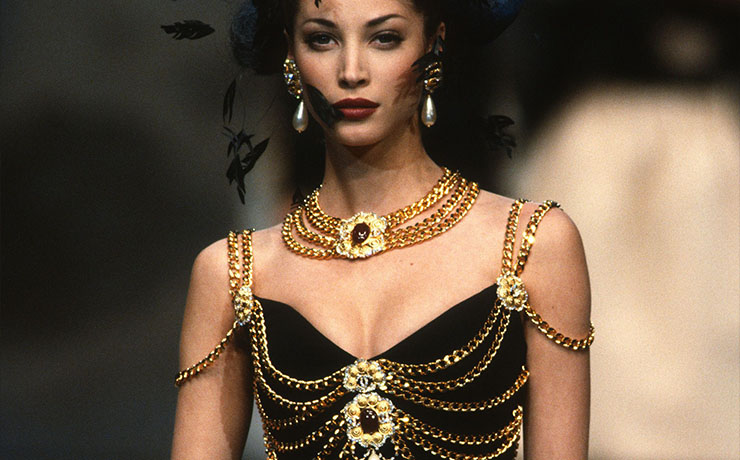 Since the late 1990s, there’s been an explosion of connections between what may seem like two polar opposite worlds — anime and high fashion. In the realm of high fashion, there is a clear distinction of social class as coveted designer pieces are often viewed or experienced as a symbol of one’s elevated status. In contrast, anime as an art form is capable of connecting with a wide range of audiences on a personal and emotive level.

With many anime shows exploring genres like science fiction, fantasy, through the perspective of magical girls, they’ve providing the narratives of hope to viewers who may face a grim reality at home, making anime an accessible and empathetic art style. What was once labeled as a “nerdy” pastime, has gained more mainstream acceptance and developed a cult following on social media channels.

Fast forward to our contemporary setting, what once was two roads diverged, has now morphed into an intersection of the art forms. Manga stills are added to style-inspo Pinterest boards, brands are collaborating with anime shows to launch capsule collections, and designer Virgil Abloh incorporated manga motifs into the Louis Vuitton Spring/Summer 2021 menswear show. The two have now merged together and thus created a catalyst of fashion trends. The budding relationship between anime and high fashion can be traced back to the 90’s when anime first became popular with western audiences with children’s programs such as Pokemon and Dragon Ball Z. But what really blossomed the initial relationship with fashion was female empowered anime’s such as Sailor Moon and Nana.

Nana in particular has a specific taste for fashion, and by specific we mean a pure devotion to the styles of the fairy godmother of punk: Vivienne Westwood. Author Ai Yazawa, actually went to fashion school herself but later dropped out to pursue a writing career. However, her soft spot for high fashion and rebellious couture have always shown through her work. So with the premise of the manga following a pair of best friends who chase after their respective dreams with the support of one another, fashion is an equally essential character.

The two worlds of Nana and Vivienne Westwod collide as the characters wear Westwood staples such as creeper shoes, tartan mini skirts, and heart lapel jackets. Many of Westwood’s house codes are based in reviving historic costume elements with a modern edgy flair. It’s a perfect potion of aesthetics for the manga as the girls pair their velvet corsets with fishnets, and punk chokers with slip dresses. The styles have found a new resurgence due to TikTok and the popularity with the e-girl subculture. A popular sound of the app is the list of Nana O’s favorite things: coffee with strawberry cake, the Sex Pistols, and alast, Vivienne Westwood.

One of Nana’s signature accessories is the Saturn sovereign orb necklace. Whether it be strung on a delicate metal chain or arranged in a triple layered pearl choker, the two main characters often incorporate the orb symbol into almost all of their looks. The contextual symbolism of the Vivienne Westwood orb is the juxtaposition of royalcore tradition and rejection of the establishment in the singular piece. It features the sovereign orb, a historical piece of jewelry that was used for royal coronations. And being the true punk she is, Westwood added the ring of Saturn around the design to bring a futuristic element of change to the piece. All together, it represents rebellion and rejection against the status quo — a punk paradise.

Meanwhile, the cult classic anime Sailor Moon is on the opposite spectrum of aesthetics. The show is not only known for its portrayal of strong female friendships who save the world from the forces of evil, but also the divine femme street wardrobe and soldier uniforms of its characters. One of the strong points of the series was that the character’s ultra-feminine identity was never viewed as a weakness when it came to fighting. Rather they found strength and resilience within their network of female support and expression, with the cherry on top being their coordination of magic mini skirts.

When it comes down to the characters’ street style, many of the Sailor Moon fits are easily replicable in real life. The magical guardians wore classic silhouettes such as button down blouses, boxy sweatshirts, crop tops, high waisted bottoms, and A-line skirts. It was a series of forever classic styles with a kaleidoscope of color palette, making it easily wearable for today’s standards.

Something that may be surprising to fans is that the illustrator of the manga, Naoko Takeuchi, actually took inspiration from the 90’s decade of haute couture styles. Much of the high fashion influence was displayed in the regal magic universe with both the heroes and villains, and a fan favorite was the fashion parallels to designer Thierry Mugler. His sophisticated extraterrestrial sense of fashion was a perfect fit for the series with characters like the Spectre Sisters and Queen Beryl often wearing Mugler inspired pieces. Other designers that Takeuchi looked towards for inspiration were the likes of Chanel, Christian LaCroix, and Yves Saint Laurent. It took the anime to a gorgeous level with the illustrative eye candy, as the quality of art has been adorned by both fans and critics.

While both Sailor Moon and Nana have been influential for fans to model their personal style after, one group of anime fans that’s driving up their respective market is the coveted sector of hypebeasts. Following the footsteps of hype conglomerate Supreme, many brands nowadays opt for exclusive collaborations and produce a limited set of quantities in series of drops. Consumers of these brands will set countdown clocks to buy these rare pieces and some even resell them on websites such as Grailed for double the profit. It’s a fanbase that holds brand dedication close to their hearts, and doubles up with the collector’s merch fanbase of anime.

Supreme themselves did a limited drop of designs incorporating imagery from the iconic anime film, Akira. Akira itself is an influential piece of cinema that paved the way for both anime and science fiction films, playing a pivotal role in the subgenre of cyberpunk. It has even served as inspiration for both Kanye West music videos and Comme des Garcons tote bags.

Otherwise, streetwear and anime had fused together to create a collection of Akira baseball caps and syringe panel tees – that now sell for $200 plus on StockX. Another streetwear mega-brand BAPE, also released a summer 2020 collaboration with Dragon Ball Z. The line featured a range of phone grips, hoodies, and t-shirts – with a popular motif being a cute baby Milo on the front.

But it’s not just the epicenter of hype culture that hopped on the anime wave, accessible clothing brands like Uniqlo and Adidas, and beauty brands such as Colourpop have also done collaborations. The Colourpop X Sailor Moon makeup line actually sold out in a matter of seconds with its offerings of celestial inspired eye shadows and glitter pigments.

As streetwear and high fashion simultaneously pay homage and ink exclusive manga deals with the art of anime, it seems that the only way from here is up for the two. Since there’s been a global call to have fashion become more accessible, it makes sense for consumers and designers to take notes from globally popular anime on design and appeal. Only time will tell if Akira’s vision of post-nuclear Neo Tokyo will become true, and if we’ll all be wearing the same Akira red hued motorcycle leather jackets.