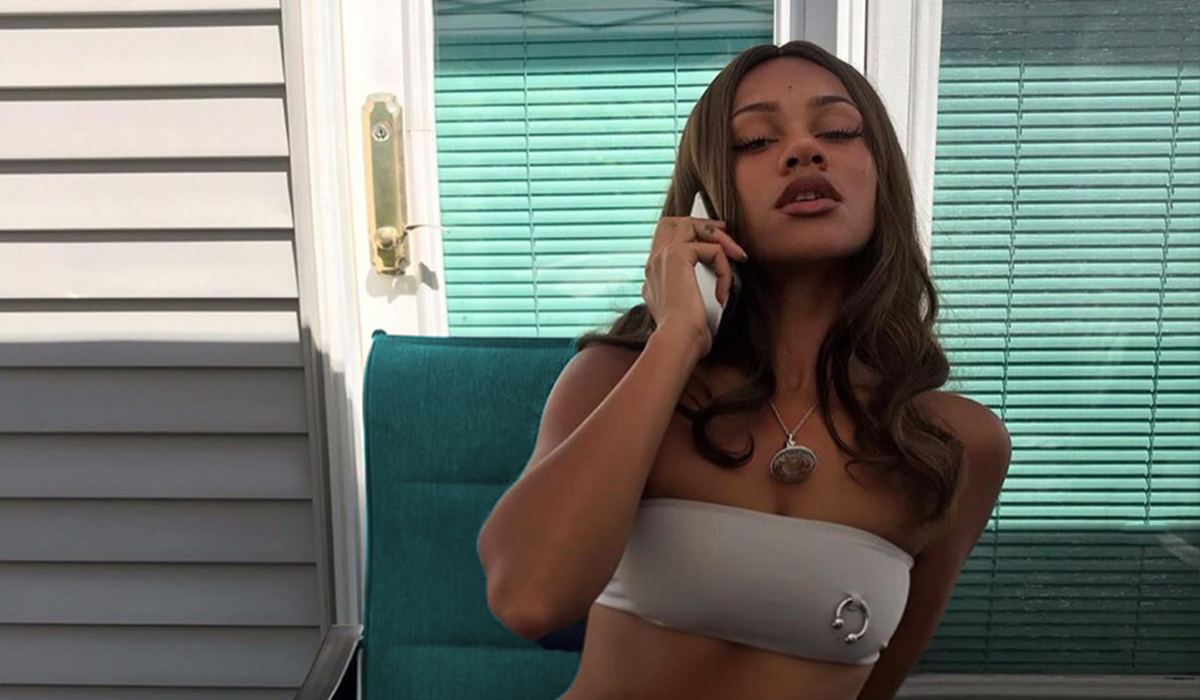 Fae Sapienta is a multi-hyphenate artist with a wanderlust that knows no bounds. Having already established herself as a world-travelling stylist, designer and model – this year, the talented creative has set her sights on entering the music world. In doing so, re-focusing her artistic vision to fit an alternative format of expression.

Dropping her debut single “Mirage” on 4/20, followed closely by the songs’ self-directed visuals a week later, Sapienta is clearly putting in the work to make 2020 her year. So far, we’ve seen her reborn as FAE – a deep-thinking songwriter who draws inspiration from exploring the poetic nature of life. With the release of “Mirage” sparking our interest, last week NBGA caught up with the Parisian “it girl” to talk music, fashion and her formula for cultivating success through hard work and self-belief. You won’t want to miss out on the gems of knowledge the elusive art-maker shared in her exclusive interview with us below. Make sure you keep your eye’s peeled for FAE this year, she’s got the vision and we can’t wait to see where it takes her next!

Hey Fae! Where are you in the world right now? What are some of the ways you’ve been keeping busy during this quarantine?

Hey girl! I’m in Toronto right now. Honestly, I’m just taking some time for myself and trying my best to live stress free. I’ve been a little busy, I recently finished editing my first two music videos, so I’m feeling pretty relieved and excited about that. I’ve also written and recorded quite a few new songs which is really positive. Aside from working on music stuff, I’ve just finished this super inspiring online class about modernity in fashion, and I’ve also been trying to set aside some time to paint once a week. I’m trying to do things that make me feel happy and zen!

Last Sunday, you premiered the visuals for your debut single “Mirage” . I imagine you filmed the video before we all went into lockdown. What’s the inspiration behind the images we’re seeing here?

I wanted to give the visual an energetic feeling, sort of channelling this feeling of invincibility; like I came to fight for my life and never give up. It was also important for me to champion femininity. So, I guess you could say that all those concepts mixed together where the inspiration behind the scenes you’re seeing in the video.

Mirage’s instrumental cleverly fuses Hip-Hop and R&B to create a bouncy hybrid sound. What was it like working with producers Bluxz and Atom?

Working with Bluxz and Atom was amazing- they’re both super talented producers. The process of making the beat seemed quite quick and easy with them. Atom started building with some chords on his beat pad, and eventually added another spacey stab sample. Then, Bluxz took all those sounds and added some trappy drums, mixing and arranging all its elements and voila! I was immediately drawn to it as soon as I heard the finished product.

Why is it important for Mirage to be the single that introduces your sound to the world?

I think it represents me well – it’s hip-hop, it’s energetic and the lyrics show people that if you want anything in life you have to go out there and get it; I believe in its message so strongly.

You’re quite the poetic artist. In the opening scenes of the video, you recite a touching spoken word piece about following your own path in life. Can you tell us more about the meaning behind this poem?

I don’t think I could have started the video in any other way; it needed to be as authentic and true to me as possible. Ultimately, I wanted to show people how I feel. For me, choosing to follow your own path is linked with ideas of persistence, power and self-discipline. In the past, I’ve received advice from people around me who hadn’t necessarily lived my experiences, or walked in my shoes. Through this, I quickly learned that it’s important to keep strong in the vision you see for yourself, and to not to let outside energies influence your decisions. No one knows you better than you know yourself, so for that reason it’s important to always trust your intuition. I feel like you have to create your own path in life because no one is going to do the hard work for you. In that way, creating your own mirage is a metaphor for building the perfect world for yourself – a world where you feel comfortable, in control and at peace.

You sing in two languages on the track, merging French and English seamlessly – what urged you to make this creative decision? Also, for your fans who may not speak French, could you tell us more about the overarching message behind the lyrics?

It came quite naturally, I didn’t have to think about it too much – it’s just felt right, you know? When I’m speaking French in the first part of the hook, I’m explaining how I’m able to see a mirage when I open the figurative curtains on my life; I always experience this novel feeling when I’m travelling, seeing the world and experiencing new cultures for the first time. In a sense, the mirage becomes a vision of you winning or achieving your goals – it’s a dreamy view because you know you’ve worked hard for it.

You did such an awesome job self-directing the visuals, we’re certain this is just the beginning when it comes to your directorial career. If you had the chance to choose any film director in the world to work with for your next video who would you pick and why?

I love the work of Anton Tammi – it’s very dreamlike; I’d love to get to work with him one day. I’d also love to get the opportunity to work with Hype Williams, he has such an iconic vision and I’m in awe of the way he incorporates colors into his visuals.

Alongside making music, you also happen to be a talented stylist – having dressed the likes of Coi Leray and IAMDDB. How did you come up with the looks we see in the video? We’re loving the fluffy white hat you’re wearing in the single cover art!

Well, I knew I was coming to Toronto to shoot the visuals so I brought along a few fits with me. Then, when I arrived, I went straight to do a shoot at this vintage thrift store so it was the perfect place to pick up some new pieces. I had been looking for a short vintage leather jacket for a while, and I picked out the purple and the white ones you see in the video – which I love! Another one of the outfits I’m wearing is actually something I made and will be releasing later this year – so keep your eyes peeled for that!

In your own words, what does it mean to be a non-basic girl?

I think to be non-basic you have to be authentic and courageous! I think of a girl who is not afraid to just be herself and push boundaries, someone that has a revolutionary energy, is curious and doesn’t accept the labels society tries to put on her.

Lastly – what’s next for FAE the artist? I have a feeling we’ll be hearing more music from you before the year is out? Do you have any imminent plans for when the lockdown is lifted?

Absolutely! I’m dropping my second single “PALO” with another visual so soon! I recently tied up my debut EP and I’m gearing up to release that. I also have a clothing line I’m working on that should be ready to launch by the end of 2020 – I’m trying to keep myself super busy this year. There’s so much coming that I’m excited about but I can’t give you all my secrets just yet haha – you’ll have to wait and see!

FAE caught your eye? Stay updated on all her new releases on Instagram and Spotify below!