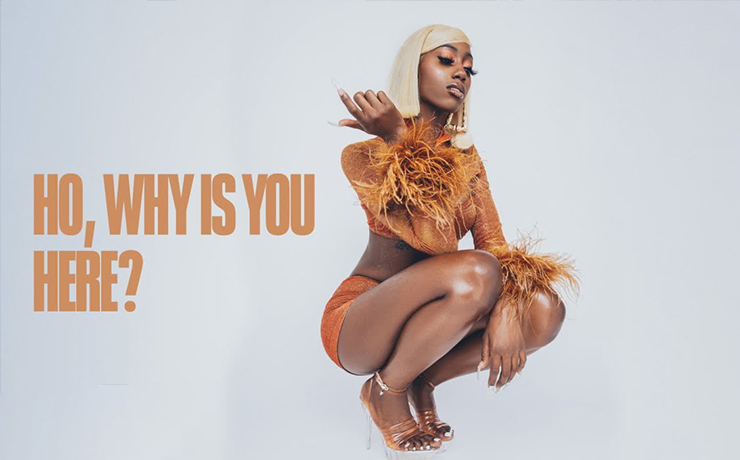 You might have seen some talk about Flo Milli on your other favorite rapper’s Twitter feed, or maybe even on their IG story. Milli recently established her presence in the music industry with the release of her first mixtape, Ho, Why Is You Here? on July 24th. It was met with rave reviews from culture-faves like Rico Nasty, Kehlani, Noname and Missy Elliot who all took to Twitter to express their love for Milli’s body of work. But who’s surprised? Cardi B and Rico Nasty respect Flo Milli’s artistry so much that they even co-signed the Alabama born rapper back in April.

Milli’s captivating, confident attitude makes her an artist taken seriously, regardless of her age–she’s just 20. In a recent interview with Vulture, the rapper says she chose the title of the album as a nod to anyone who’s tried to take away from the success that she’s worked for. “I feel like, as young women, you deal with haters, you deal with insecure men,” said the artist. “Sometimes you just have people trying to bring you down. So it’s like, ‘Ho, why is you here?’”

She has perfectly mastered the Mean Girl, ‘you can’t sit with us’ vibe with her music, but not in a way that you can dislike. It’s so refreshing. Whether you are partying with your girls, dancing alone in your room, or getting over a breakup, this EP will have you feeling yourself. Milli’s track “Weak” was an instant hit, garnering over half a million views after one week on YouTube.

With artists like Megan Thee Stallion, City Girls, and Rico Nasty making big moves this year to dominate the music industry, we’re being allowed to embrace the idea that female artists shouldn’t be compared to one another. Just like male artists, women have nuanced sounds and attitudes, and there’s more than enough demand for all the talented female rappers to thrive. In an industry where women, especially Black women, are continuously criticized and pitted against each other, it’s beautiful to see young women who come to the music scene with a self-assurance that can’t be broken.

Ho, Why Is You Here? is a testament to Flo Milli’s standout presence as an artist who is here to stay. She knows her worth, and she’ll be the first to remind you. To be honest, it’s a little hard to forget.