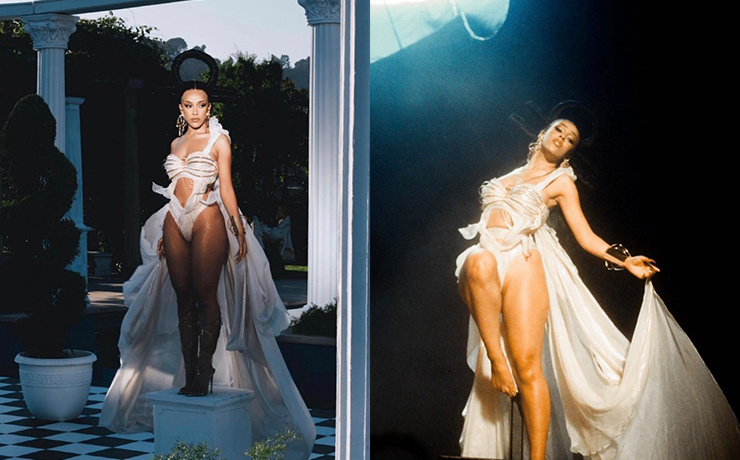 There’s not many who have mastered the tightrope between internet troll and trap star. For reigning R&B princess Doja Cat however, this is entirely the case. In an age of those who break the internet, not every viral star has built a serious repertoire that could actually last. The singer and rapper however, has proved herself to be one of the top artists of gen Z – with songs not only graced as radio candy, but having gained a cult following via TikTok trends. She has the algorithm down to a tee – and has been cranking out sound bytes from albums such as Hot Pink, and the latest drop Planet Her. Doja’s style is just as impressive as it showcases her multidimensional talents and what it looks like to be a digital girl in the modern world. Throughout the years there’s been spikes of 90’s cyber-ghetto, a little bit of kawaii, 70’s glamour goddess, and campy hypebeast. With each album there is a style metamorphosis – as Doja is not afraid to experiment and push the boundaries of superstar style. Her fashion DNA is constantly evolving and keeps fans on the edge of their seats.

Doja’s first claim to fame was with the 2018 viral sensation of “Mooo!” — a song solely about cows that interpolated classic hip-hip bars with raunchy milk wordplay. It was accompanied by a music video that featured her in a cow print two-piece and sexy farm girl fit. Twerking in front of a green screen that casted images of pixelated burgers and cartoon farms no less! The lo-fi bop along with its video was responsible for her newfound stardom. As odd as it sounds, this was the perfect starting point both musically and stylistically for Doja to launch out. Following her own background in online culture (spending time as a teenager on chat rooms and gaming) it’s only fitting that she asserted her self enough to pull off these looks. The result: she is at once both humoresque and non-chalante.

Her next music video “Juicy” was the perfect combination of the two, as she showed off her best assets in a custom watermelon latex suit and a cherry inspired costume. The fruit cocktail of sex appeal set up a recipe of style success, that she would only further develop.

It was during this era that Doja began her longterm relationship with her partner-in-crime stylist Brett Nelson. Am just like that, a style-star was born — as he dressed her in custom The Blonds at the 2019 BET Awards. The featured number was a gown adorned by pink hued yarn balls and a spiky pet collar; the wildest kitty kat granny sweater ever. The dress took some major guts to wear as Doja found herself on the worst dressed list next morning, yet none of that mattered when it’s for internet clout.

As evocative as her style is outrageous, there is also an element of punk that lingers over her wardrobe choices. In imposing her own stylistic rules to what punk entails, this is but an extension of her former online persona. Who could forget her PrettyLittleThing collection after all? Complete with racy white corsets and rose pink mesh styles — it was the street glamour meets rock aesthetic we’d all been waiting for.

Punk Doja was the style move for the album era of Hot Pink. It was a metaphorical gutsy punch of pussy power. Accompanied by a plethora of hot pink latex, lace and leather, and dripping silver diamond chains, the e-girl was getting an update. One of the biggest hits she had in the era was the single “Streets”, which spawned the infamous and sensual #SilhoutteChallenge on TikTok. In the cinema-esque music video were many looks that fell under the punk belt and were styled yet again, by the one and only Brett Nelson. He understood the assignment and gave her a black widow Mugler catsuit, a custom spiderweb mini dress by Caroline Reznik, and a mannequin abstract Christian Siriano dress.

After her mainstream breakthrough, her style elevated to a whole other level. At this year’s Grammys, she personified the moment! She was a certified stunner on the red carpet, wearing a Robert Cavalli ensemble: a cream motorcycle deep-v suit on top, and a luxurious neon green feather skirt on the bottom.

The brighter her star became, the more access Doja has had to designer archival and custom pieces, and Gaultier seems to be a favourtie! For her performance portion of the broadcast she channeled Catwoman in a custom Jean Paul Gaultier latex catsuit, featured with the house’s signature swirled corset.

Within the past year, Doja has built a reputation for herself by always bringing the A-game for award show performances. During the EMA’s last fall, she looked like a goth mermaid in a shredded oyster dress with exposed stockings giving a metal makeover to her hit “Say So”. At the Billboard Music Awards, she was a Broadway baby and slayed in a 1920’s-inspired white fringe number, looking as if she was a merry murderess plucked off the Chicago stage. Each time she steps on-stage, nobody knows what’s coming. This element of surprise was just the case for her latest project Planet Her.

Fast forward to the summer of 2021, Doja is focused entirely on her new era – and has has had the stellar roll-out for it. Planet Her is a supersonic odyssey that gives way to the luscious extraterrestrial looks she’s been adorning. She’s been spotted on Instagram and music videos showcasing space age and Afrofuturist influences; a supreme fashion universe from AREA couture to Iris Van Herpen, with nuances of upcoming brands Chet Lo and Dipetsa. While of course, Nelson sits co-pilot in this quest of more edgy and haute couture looks – being the creative director of this project supplying serve after serve.

Now – more than ever – it seems that Doja is coming into her element. Despite the style move being the exact opposite of her past aesthetics, each look she’s worn is as effortless as it is complex. In all, it seems that being a fashion chameleon has become a basic instinct to her.