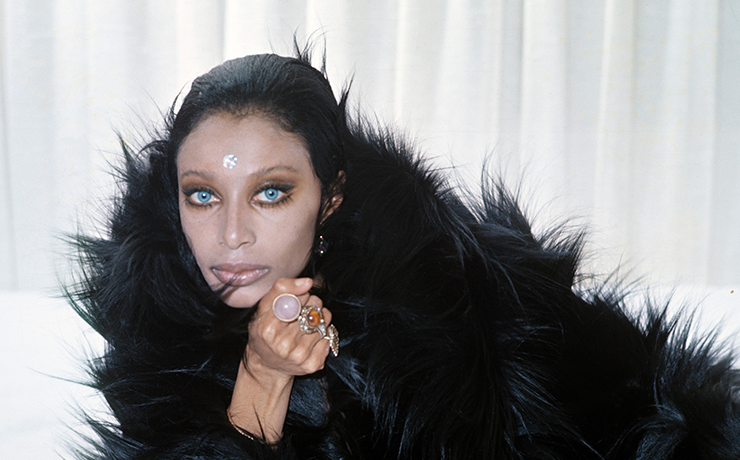 The term “supermodel” doesn’t have the magic touch it once did, the mystery of the supermodel is dispelled for a number of reasons, but Donyale Luna, coined the first black supermodel had a presence no one could explain.

Peggy Ann Freeman turned Donyale Luna was born in Detroit, Michigan to two working-class African-American parents. She gained popularity in the 1960s in Western Europe and was the first African American to be on the cover of British Vogue, of the March issue in 1966. Fellow model Bethann Hardison said, “…no one looked like her. She was like a really extraordinary species.” Donyale was a resounding 6 feet tall, black, and captivatingly beautiful. It’s said that when she walked into rooms in Europe people would stand and applaud. Any man’s jaw would drop as she glided through the streets. In America, the reactions from her looks were a stark contrast. She said, “Back in Detroit I wasn’t considered beautiful or anything.”

Her early life was not the usual suburban family story. Her parents married and divorced four times due to “strong personalities” so the instability inspired her to recreate herself, giving her such a strong imagination, she was always creating new origins and backgrounds of her life mostly to cope. Her sister even describes her as “a very weird child” (most siblings would say this), but Donyale lived in her own wonderland. This habit segued into her love of acting. She joined her local community theatre, Concept East Theatre and played the roles of Cherry in Paint Wagon, Ariel in The Tempest, and Chastity in Anything Goes. Eventually later on in her career she starred in a few indie films including Andy Warhol’s Camp and Screen Test: Donyale Luna. This is around the time that she decides to go by Donyale George Luna. Luna was speculated to either be her father’s “real” surname as she says or a reference to the Space Race. Either way it’s a great and memorable name. In her teens she also had trouble identifying with her race, she tended to claim to be of mixed backgrounds such as her mother being of Mexican and Afro-Egyptian lineage or Polynesian to assimilate. Many black models would do something similar to this, usually just being mistaken as more “acceptable.”

Her start in modelling began in her 20s when she was discovered just in the streets of her hometown, much to her mother’s dismay, she wanted Donyale to be a nurse, but with some persuasion Donyale moved to New York City around 1963. Her first shoot was with none other than Woody Allen for Mademoiselle. She’d go one to doing shoots and walking shows for a plethora of big names. Her work with Paco Rabanne was controversial as their show in 1964 only used black models. American journalists were so filled  with hatred that they spit in the face of Rabanne. (Sad). Harper’s Bazaar did a cover of her sketched likeness by artist Katharina Denzinger in their January 1965 issue which was the first time in 98 years that the publication had a black person ever on their cover! She was featured on the front cover again alongside Paul McCartnet, Ringo Starr, and Jean Shrimpton.

That same year, her father was shot by her mother in self-defense with her sister as a witness. She had received word about this a whole three months later and decided to not return home for the funeral, which psychologists say is a coping mechanism. Around this time, her career began to slow down due to publications “not being ready for photographing beautiful black women”, in the words of David McCabe, the photographer who first discovered her. US advertisers were pulling their ad revenue and readers were cancelling their subscriptions because of the immense uncomfort it caused them to see a black woman photographed in a role other than a maid or servant. Black models were only shown through a racial script.

Unfortunately, due to all the pressure she was under at the time with the death of her father and a short failed marriage she experienced a nervous breakdown and had to spend some time in the hospital to recover. She moved out of New York two years later to Europe in 1966 the same year that she rose to fame. Her career changed fashion for the better as non-white faces hadn’t had a chance to be showcased yet. The year 1964 is the year the Civil Rights Act passed. She really took a big leap in moving to New York for modelling. Her daughter Dream named after after the renowned speech given by civil-rights activist Martin Luther King, Jr, “I have a dream,” writes for Vogue, “ I’m still amazed at how brave my mother was to leave home for Manhattan at that point in history, with no clear plans or steady income – just a telephone number hastily written down by a stranger. As a girl of colour at that time, simply believing in her own worth and following her true calling were great revolutionary acts.”