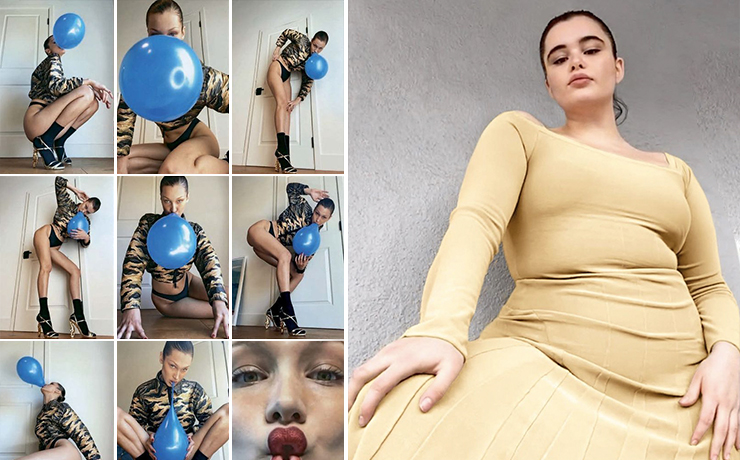 From planning to production, developing editorials is no small feat. But when it’s the first wave of lockdown and your work rarely includes self-portraiture, what’s a creator to do? For many photographers, that meant taking to webcams and shooting their subjects remotely. Most people were adjusting to working from home anyway, so it seemed like a natural evolution of the field. While some photographers pioneered the trend by capturing their loved ones via video chat (a meaningful way to document the distance), others took this as an opportunity to meet virtually with clients and collaborators who would have postponed otherwise.

2020 further honed in on the amount of talent that goes into crafting just one photoshoot, as the pandemic left many jobs vacant and put crew members out of work. During quarantine, models took on additional roles (from stylist to glam squad), which is a reality that freelance content creators know all too well. Models have always been shape-shifters; this was further emphasized by the ways they contorted their form to fit squarely within the frame or with some even shooting the images themselves. Since the subjects were often in their own homes, there’s a sense of ease and realness to this current wave of photography.

One of the most exemplary iterations of virtual photography came courtesy of French fashion label Jacquemus. Bella Hadid, Barbie Ferreira, and Steve Lacy were among the stars of the “Jacquemus at home” SS20 campaign, posing via webcam for photographer Pierre-Ange Carlotti. Weeks prior, Hadid appeared in Vogue Italia’s “Far Away So Close” virtual shoot, as did her sister Gigi. There was also i-D’s Safe + Sound issue, in which editor-in-chief and creative director Alastair McKimm recruited Willy Vanderperre to capture 19 models at home — women like Adesuwa Aighewi, Paloma Elsesser, and Imaan Hammam among them.

Legendary models like Naomi Campbell and Cindy Crawford also expanded their digital portfolios, with the former using her own iPhone to shoot Essence’s May/June 2020 cover. Gucci even had a campaign that was shot by the stars themselves, offering a perspective of models through their own lens as they danced and sang along to “Alright” by Supergrass. Back in September, Marni’s experimental fashion film also required the subjects to be shot in their own locations by friends and family. High fashion models weren’t the only ones showing off in digital photo sessions. From celebrities like Demi Lovato to Broadway stars, there was a wealth of “at-home” photos that came out of isolation.

Though the quality of FaceTime photos is lower, the storytelling is intimate and exemplifies the creative’s motivation to make art amidst obstacles. The visuals often recall analog photography, especially when the final product is rendered to look like a contact sheet. Directed webcam editorials — while reminiscent of shooting selfies on a Mac using PhotoBooth — elevate one’s artistic capabilities with minimal tools. There are a variety of methods for achieving the ideal FaceTime photoshoot; many photos are the result of screen grabs from laptops, but some photographers opt to physically capture their screen with a DSLR — allowing for a new depth of perception and intentional graininess.

Once it’s safe, many photographers will likely return to the comfort of their studio visits and on-location shoots. This will be great for restoring aspects of their own livelihoods and that of the production crews. Still, this expansion of photography has definitely unlocked creative avenues for plenty others — professionals and amateurs alike — to tap into.