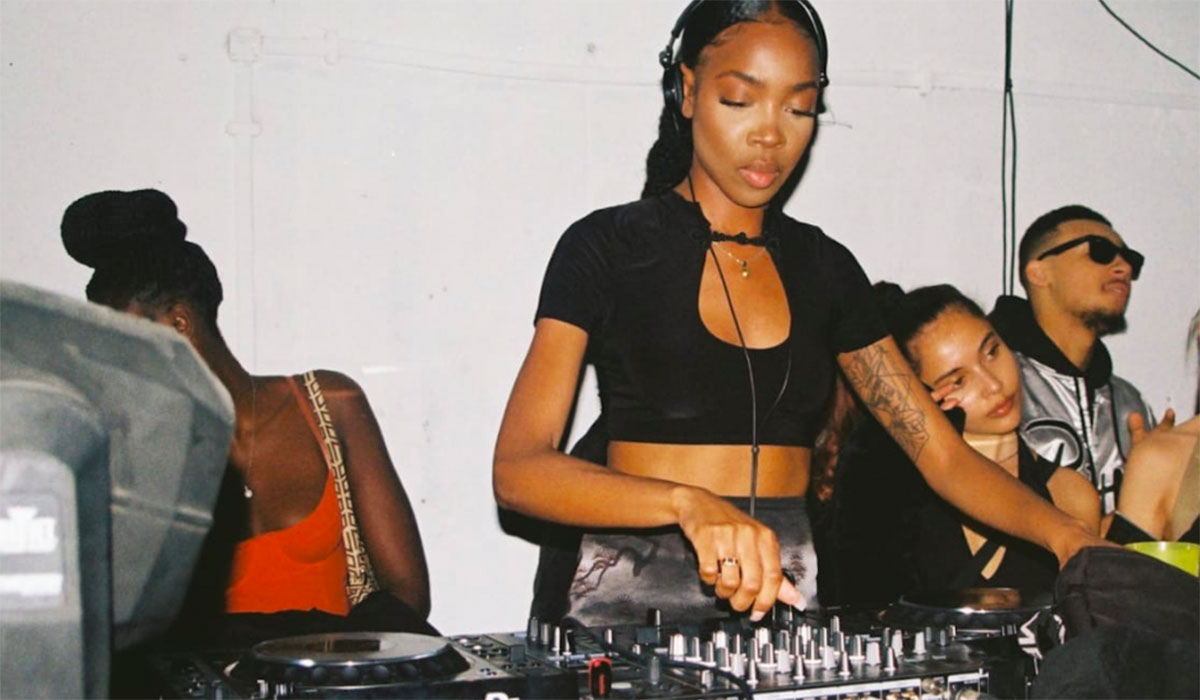 Beginning her DJ’ing career back in 2018 out of sheer curiosity, in just two short years, TSASHA has managed to put her stamp on the currently flourishing female DJ’ing scene in London. Since having played her debut Boiler Room set in October of last year, TSASHA has been travelling the globe looking for new and exciting sounds to add to her ever-growing, ever-diverse music library. A talented musical innovator with a penchant for fusing contemporary Hip-Hop sounds with more esoteric world music, the South-London native is defining her own lane – and it’s one which places much focus on experimentation.

Below, NBGA catch up with the rising creative to talk first crushes, testing boundaries and her love for Baile Funk edits. Not only this, we hand over the decks to TSASHA as she takes over our tracks of the week, providing us with a playlist packed full of the hottest Hip-Hop records right now for all of our turn-up needs.  A charmingly introverted energy with an immense musical palette, we’ll surely be seeing TSASHA continue to shell down shows from London to Lagos for years to come!

Tell us a little bit about yourself, where you grew up, and the type of music you grew up listening to?

Hey, I’m TSASHA (*pronounced with a silent T- like tsunami) and I’m from South London. Growing up I was always drawn to early 2000’s R’n’B, Hip-Hop and UK Garage music. Oh, and anything by the rapper Kano – he was my first crush haha!

When did you start DJ’ing?

I’ve been DJ’ing for around two years now. I guess I got into DJ’ing because I wanted to become exposed to new and unpredictable sounds – I wanted to experiment a little and see what I could do. I started practicing with Hip-Hop, and as I progressed, I began incorporating Trap and Baile Funk edits into my sets, and the rest is history.

What were some of challenges you faced when first starting out ?

I’d say the main challenge was overcoming shyness, I used to feel so vulnerable playing in front of people that I’d pull up to sets with a track-list ready. I quickly realised that no track-list can predict the reaction of a crowd. I had to learn through experience that DJ’s aren’t robots and that making mistakes is ultimately part of the process – essentially, it’s a vital aspect of learning the craft.

How did you overcome the stage-fright in the end?

I started focusing more on being in the moment during my sets, and feeding off of the crowd’s energy. Another challenge I faced when first starting out was getting booked for events – it was super tricky. So, I just kept working on my mixes online, collaborating with my friends who host events, and networking with creatives and promoters locally. Eventually, I found my footing – as well as my people – which made me feel much more comfortable about getting up there.

Are there any DJ’s who inspire you?

I’m always inspired by my peers – I feel super lucky to get to work amongst a new generation of DJ’s who aren’t afraid to push boundaries. I think DJ’ing as a whole is becoming less about genre’s and more about creating an experience – playing around with different sounds and musical innovations; it’s becoming more of a form of artistic expression. It’s a little nerdy but I love watching and studying sets online; Boiler Room is a great platform to keep up to date on emerging talent as well as industry veterans. The DJ’s that are inspiring me the most right now are Honey Dijon, Bambii, Manara & AAA. I think they’re all super talented at what they do, from crowd control to selection their sets are always incredible.

Being part of a new-generation of DJ’s who aren’t afraid to push boundaries, are there any genre’s you’d like to try experimenting with in the future?

Well, right now I’m enjoying experimenting with Baile Funk and Afro-House (Gqom) in my mixes. I’m currently learning how to blend these sounds with Hip-Hop and Trap, so I’ll definitely keep experimenting and incorporating the music into my live sets in the future.

Where does your love for Baile Funk & Afro-House stem from? Also, how do you think the genre has been received at the parties you’ve played so far?

It all started when I went on a trip to Cape Town (South Africa) – the energy they bring to the nightlife out there is unmatched. That’s when I first felt immersed in the music scene out there and began to discover Gqom; and I’ve been obsessed with the genre ever since. When it comes to the Baile Funk edits, I first came across the genre on Soundcloud and immediately started digging to find all the original tracks. I think the reception has been pretty good so far – as long as the music is upbeat and bouncy people tend to vibe well to it. Of course, it won’t be everyone’s cup of tea, but I’m slowly winning crowds over so we’ll see how it goes. I’d say my Treize Guest Mix on Soundcloud is a great example of where I’m wanting to take the sound next.

What has been your favourite set you’ve played to date, and why?

Wow, that’s a hard one. I’d say it’s between my Boiler Room set and a show I did in Lagos (Nigeria). Boiler room was a big-deal for me, but Lagos was my favourite trip I’ve been on to date – from the weather, to the nightlife. There’s a club called Quilox out there and the atmosphere is always crazy, everyone is very flashy, there’s lots of tables and bottles and just good good vibes. Hopefully, once the Covid-19 situation is all under control, I can plan to go back out to Lagos for the end of the year!

Who’s your top artist to watch out for in 2020? Is there anyone that’s on your radar that you think is super underrated?

Can you give us a little background on your favourite track from this week’s playlist?

Right now, my favourite track is “Cover Girl” by BIA – she’s also one of my favourite up-and-coming artists. She has an infectious flow, and just raps so effortless with it. I love to see ladies doing their thing and killing it in the rap scene – it’s super inspiring to me.

Do you have any up-coming shows or new projects you’re working on in 2020 that we should be looking out for? Where can we stay updated on all things TSASHA?

I’ve got a few things coming up that have been put on pause for the moment due to the Covid-19 outbreak – so keep your eyes peeled for that once the lockdown is lifted. Otherwise, if you want to hear me play, I’m on Balamii Radio every third Saturday of the month from 11AM-1PM. You guys can also stay updated on my mixes via my Soundcloud (@TSASHA) and stay connected with me on Instagram via (@tsasha_ )

Listen to TSASHA’s Tracks of the Week below!