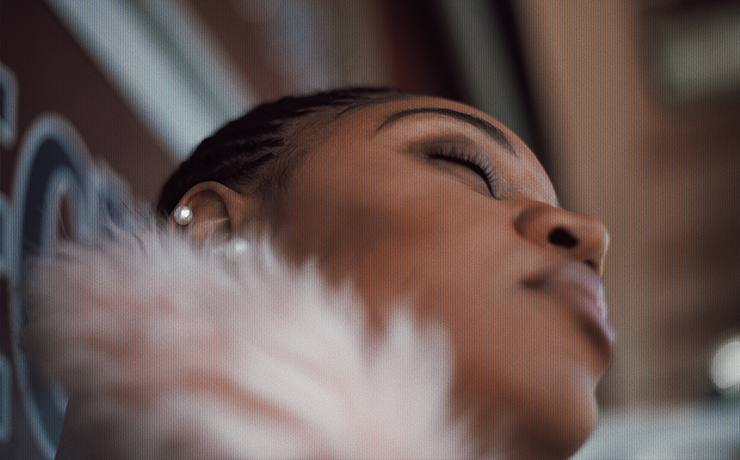 For Nico Kartel, the beginning of his career as a photographer wasn’t so easy. The visual artist, who’s photographed the likes of Rihanna and Cardi B, moved to New York City at only 19 years old, with little cash and a dream.

Kartel’s work is reactive, and encapsulates a mood-shifting reality of New York City while blending together a magical fantasy for both Kartel and his subjects to revel in. In an endless sea of things, Kartel enjoys creating worlds, where he can abide by his own rules, free and flowing together harmoniously.

Prior to his professional career, Kartel began snapping photos of random objects on his iPhone 5 for about 2 ½ years. It didn’t take long for him to realise he had a talent, and he spent his first tax return on photography equipment.

I just felt like after using an iPhone for so long, I was like ‘I clearly have an eye for this

Kartel’s inspiration derives from the people around him, like his close group of friends who inspire his art and teach him new things about life. “I’m grateful for them because we help each other grow as people and artists.” he mentioned. In addition, he accredits a lot of his inspiration from his grandmother. “Growing up being young, queer, and West Indian was hard because it wasn’t really respected,” he said. Despite not having the perfect relationship, Kartel explained that his grandmother inspires him to become truly independent. “I’m inspired by her because she came from the Bahamas in her 20s with two kids and worked her way up. She’s always been a hard worker and done things on her own, and I want to be someone that can provide for myself, too.”

And he did just that — After arriving in New York City, he immediately began working, trying to adjust to the city’s bustling lifestyle. In his first week, he attended fashion week, went to various events, and attended meetings with Reebok, Adidas, and Puma. “I think I only got 10 hours of sleep that entire week,” Kartel laughed. Coming from the “Dirty South,” as Kartel described his hometown, it was slow-paced in comparison. The city can be overwhelming, but the concrete jungle stirs a different kind of inspiration. “New York City has influenced my work because it made me appreciate non-traditional beauty,” he said. “There’s all types of characters here and everybody is beautiful in their own way. Everyone thrives just being themselves.”

Through his favorite works like Rose In Harlem and Hood Glory, Kartel gives the hood a new perspective, one that is rarely ever depicted. “I come from a not-so-luxurious place. I grew up around a lot of people that sold drugs, rocked their pants below their hips, and different things like that,” he explained. “Half of my lineage comes from hard-like roughnecks, so I find beauty in different things like that most people don’t.”

Kartel hopes to change the narrative with his work. “I tried to show people that black is beautiful, and it doesn’t matter what variation of it is. Nowadays, a lot of people only want to support a specific type of ‘Black’ instead of all types of, and I want to be able to debate all different types of Black while still making sure that it’s depicted in a beautiful way, where somebody who views it will touch them not just externally but internally.”

The creative industry undoubtedly has its challenges, especially for Black creatives. Looks are oftentimes valued over talent and Kartel felt discouraged at times. During the Black Lives Matter protests back in June, he said it was an emotional moment for him, especially when so many people are trying to capitalize off of Black trauma. “Every day, it seemed like it was something new,” he told NBGA. “Black people are going through genocide and we just cannot catch a break. And it was very, very disheartening to me, and I felt like a lot of people were just capitalizing off of our trauma.”

Despite the darkness in the world, Kartel still hopes to be a light for fellow Black creators. His work aims to celebrate Black people in all forms and at all times. In the near future, Kartel hopes to work with Solange for one of his projects. Aside from the singer’s charisma and spontaneous spirit, he also believes the two would work well together. “I don’t wanna say too much,” Kartel laughed. “but I have an idea to shoot her in her natural form. Hopefully by 2021, we can make this happen.”

For aspiring photographers and Black creatives in the industry, Kartel advises, “Mind your business, stick to what you know, and know your worth. Just be yourself.”