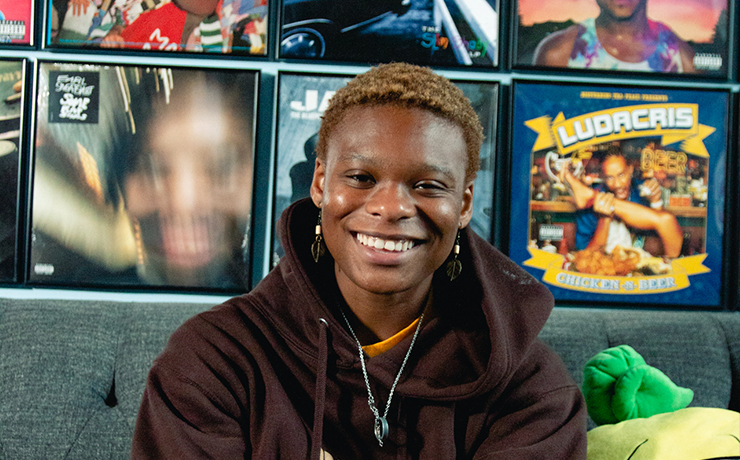 The tumultuous nature of last year’s events left a mark on everyone. But despite its hardships, 2020 brought forth new success and acclaim for the independent Chicago-based artist Serena Isioma. In the final months of 2020, the 20-year-old singer achieved widespread recognition when their song Sensitive went viral on TikTok. The collective love for the song led people to Isioma’s breakout EP, Sensitive. The EP radiates ease, with groovy 70s sounds on tracks like Cookout, and more laid back, beat-heavy tracks like Move.

Following this new wave of recognition, at the end of 2020, Isioma came out with their sophomore project, The Leo Sun Sets. The project was written and produced almost exclusively during the pandemic, and crafts a sound that fuses hip-hop with lo-fi beats. The new EP is more intentional in its storytelling, with songs detailing an honest exploration of self-love and self-confidence. Simply put, The Leo Sun Sets is the active documentation of Serena Isioma’s journey to finding themselves.

Serena sat down with NBGA to chat about the experimentation that goes into their music, creating art from brief moments in time, and the non-linear path of self-discovery.

Looking back, what’s something you learned about yourself in 2020?

I learned a lot, but I will say the biggest thing that I learned was that accepting myself is okay. I feel like quarantine had a huge effect on how I portray myself. I used to be a person who would always show off for other people and do things for other people, but once I was forced into isolation, I had to start doing things for myself and really doing things that I want. Isolation played a huge role in that.

How did your experience with the pandemic influence the making of The Leo Sun Sets?

The Leo Sun Sets was completely created during that time. I didn’t really know what I was going to do after my first project, the Sensitive EP. I knew I wanted to drop music, but I didn’t really know the context or the storyline. The entire story of The Leo Sun Sets is just me learning how to accept myself in isolation. That’s pretty much the basis and the inspiration for the whole project. So it all came together really organically. My homies and I started making it probably in January, and we didn’t really finish it until the summer, and then we started rolling it out in the fall.

What’s the significance of the title ‘The Leo Sun Sets’?

The name of the EP is pretty self-explanatory. It’s just me learning how to like calm the f*ck down. I was kind of like a wild card before, and I would always get into trouble. But now, I’m a lot more chill, I’m a lot more centered, and I’m a lot more at peace with myself. I bring a lot of fire energy into the things that I do. I feel like I am confident and very outspoken, but also very loyal: a lot of the characteristics that go into being a leo.

What was it like seeing Sensitive become TikTok famous?

That was so crazy. It’s very interesting to see how powerful that app can be, because it honestly has changed my life in so many ways. I knew right away right when someone sent me the video of Hayley Sharpe, the person who created the dance to Sensitive. I understood that she has sparked other people’s careers in the past, so when somebody sent me that video of her dancing, I knew right away it was about to blow up. I’m so grateful for people who are dancing to that song. It’s nice to know that the work that I’ve been putting in is being reciprocated. And people are appreciating it and not only discovering Sensitive, but also discovering songs from The Leos Sun Sets and from Sensitive EP. It’s been really cool.

When do you feel most inspired to write?

I feel inspired when things happen to me. A lot of the time when I write music, something will happen, and then it’ll inspire a feeling. A lot of my songs are very much based on a feeling. I don’t really think too much about the words, but more about like, how does the song make me feel? So when something makes me feel very strongly, I normally tap into that and start writing from there. A lot of the time a song won’t have a direct storyline, it’ll just come out of how I’m feeling. I’ve been an emotional wreck since the jump, so it’s not hard for things to really set me off.

What’s the difference between the Sensitive EP and The Leo Sun Sets in terms of how they represent you?

The Sensitive EP was my first project ever. It was essentially just songs that I had just strung together; there’s not really a direct storyline. It was me being like: here I am, here are some cool songs, here you go. And The Leo Sun Sets is more of a cohesive story about me coming to learn who I am and accept who I am. It’s just a lot more mature, with a lot bigger and better sounds, and better equipment. I was working more with my friends, and I believe that I’m going to continue working exactly like that. I worked very closely with my producer Saint Lewis. He produced and mixed the majority of The Leo Sun Sets, and I worked a lot with my friend Frankie Scoca, too. He produced the song Hard off the Sensitive EP, and he produced I Don’t Wanna Go off of The Leo Sun Sets. I love them both very much.

What was the creative process like when making The Leo Sun Sets?

It was something that I was going through in those moments was when I was writing the songs. I’m very much a person who just lives life and continues to live. So the songs that I make are based on real-life things; they are written in the time that those things are happening.

How is it navigating the music industry as a young person who is gender-nonconforming?

It’s awkward. It’s awkward correcting adults who are very influential, but I also feel like it’s good. It’s cool to know that I’m a lot of people’s first experiences with seeing someone who is gender non-conforming. And I think it’s cool to see a lot of younger kids coming out to me and discovering themselves through me. It’s so crazy to think that kids and sometimes adults look up to me, and that seeing how I move inspires them. If anyone’s got to be the front person, I’m glad that it’s me. But it also adds a lot of pressure to my life, because I know that I can’t be as reckless as I once was, and I have to shut the f*ck up sometimes. So it’s bittersweet, for sure.

When you’re the first of anything, there’s always that added pressure to be exceptional, so I imagine that’s a lot to handle at times.

For sure, especially because I’m Nigerian, I know that a lot of laws out there are backwards. There are steps to move things forward, but they’re a bit behind when it comes to LGBTQ+ inclusion, especially in comparison to the Western world. But it’s cool to see that a lot of kids, specifically from Nigeria and parts of West Africa, all of Africa, all of Eastern culture, are seeing me and know that it’s okay to be themselves. That’s really cool.

Career related or not, what’s a goal that you have for yourself in 2021?

The goal for myself, honestly, is to just have fun and be happy. I think that’s a huge goal. I feel like people aren’t having fun no more, and that’s whack! Everyone should just be having fun and be happy. I want people to know that I’m not going anywhere. I’m going to be everywhere, sooner rather than later. So, just get used to hearing about me and seeing my cute face.

Serena Isioma taps into fleeting emotions—like sadness, passion, and joy—and makes them tangible. Their music captures those moments poignantly: allowing you to sit with them and even relive them. In The Leo Sun Sets, each song stands alone as a definitive statement, while blending seamlessly into the project’s overall soulful nature. While they continue to carve out their space in the music industry, Serena Isioma places an emphasis on what it means to be unapologetically you.

Follow Serena Isioma on Instagram and check out their latest release, The Leo Sun Sets, on Spotify.