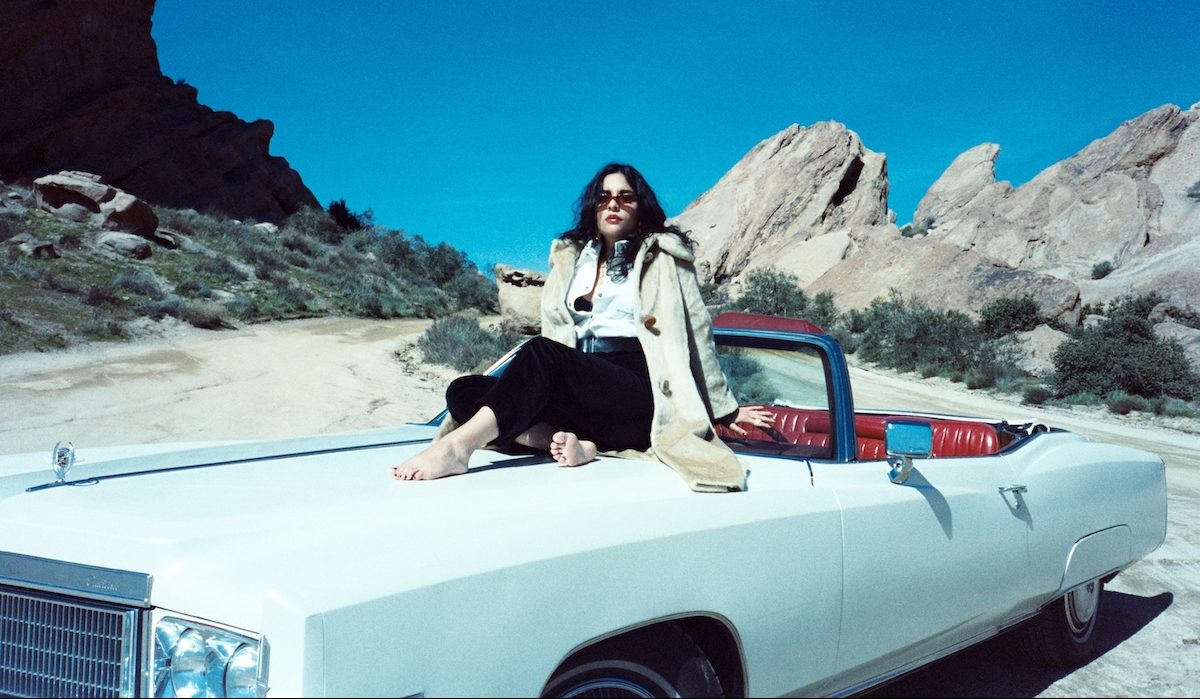 It’s no secret that Latinx music—through its vast and varying genres and styles—has steadily been incorporated into mainstream airplay the last few years. It’s a musical shift that’s evident of the current cultural climate of America — Latinx identity is and has always been simultaneously American, but now people are finally paying attention.

Girl Ultra, born Mariana “Nan” de Miguel and hailing from Mexico City, is a modern day example of language-defying genre in music. She first burst on the scene with Spanish language covers of R&B and hip-hop favorites from Drake, The Weeknd, and Daniel Caesar but just as easily gained attention with her own written work as well with songs like ‘Abril’, ‘Duele’ and ‘Ella Tu y Yo’. Her voice floats seamlessly over any beat provided to her and her honest songwriting alongside her intimate and inviting accompanying visuals, are quickly making her a can’t miss musical act.

Below we spoke with Girl Ultra about how her career started, her inspirations and her process, and you can catch her on the road with CLUBZ later this summer.

What are some of the earliest musical memories that you have? When did you know that you wanted to make music your career?

I think my earliest musical memory was through my dad. It was my dad who put me on the path to introduce me to music. Every two weeks when I could see him, he would bring me new records and introduce me to artists like David Bowie and Pink Floyd. When he introduced me to Bowie especially, a whole new world was opened for me. It was a crazy thing to see an artist who had different faces and characters and I felt very attracted to that type of creation.

In high school, I formed a band with a couple of friends, and I always knew that I wanted to do this. I come from a family of painters, my whole dad’s side, they’re painters. I’ve always felt very attracted to artistic creation and when I tried to make musical melodies, I felt so comfortable. I felt special sensations when making music and since I was a kid I always liked to experiment and speak for those sensations. When I formed a band that was the formal start of my musical career. And we were in high school and would play these small clubs in Mexico. We were near the start of the first year of college and we decided not to attend because we were playing with the band. It’s funny because every member now has and does their own project.

R&B isn’t a genre traditionally performed by Latinx artists. Why did you decide to embrace that sound in your music?

For me R&B, was a genre that I grew up listening to, and it’s just very digestible. All those progressions and melodies and what not. When I started creating I noticed that tendency of melodies. I never studied music but I could identify myself with those melodies with what I was creating and composing. Then when the band split up I was thinking about well I should experiment with this genre, it’s not well known in my language. In pop music in the 90s, there was this little hint of R&B within the scene but no one would call themselves an R&B artist, which is pop music in Spanish. Proper labels aren’t so much a thing in 2019 because there’s a lot of information flowing and every day there’s new music is out there and sometimes labels aren’t needed. When I decided to play and make R&B I was just trying to elevate the standard through the language because it was a genre that I wanted to see where it could go through the Spanish language. Latinizing in a certain way the genre through language.

Do you have a creative process when it comes time to create music?

Well, it changes a lot. I have a really cool friend, my producer, and we usually spend almost every day in the studio because we also work with other artists and write for other artists. It usually starts with a little progression that he makes and then he goes ‘Okay, record it!” and then we’ll come up with a drum idea and then we start from scratch and that’s the way I like to create. Then I’ll record the melody and then I’ll compose. I like to isolate myself when I’m writing the lyrics, but when I’m writing the melody and the whole musical process I like to be out there, you know? I don’t know, sometimes he sends me something, a beat, I used to hate that type of creative process but lately since I’ve been more by myself I’ll open something my producer sends me and I’ll be like ‘Oh, okay—I know where I can take this.’

You just released the single and video for “DameLove” with Cuco. How was the process recording with him? How do you know who is right to collaborate with musically?

It was very natural and we became friends afterward like with every collaboration that I’ve had. With Cuco, I did this festival close to Mexico City where he played and I also played in that festival, and a friend had come and introduced us and we exchanged numbers and we just naturally fucked with each other. We started talking, sending memes and stuff, and I told him I was going to LA and he said ‘Hey let’s make music!’ And then he went and just rented a studio! I’ve collaborated through the internet and sometimes it’s so messy because everyone is so busy in this business and it’s so hard to get a hold of people. But for this, we just said ‘Ok, let’s make a track!” So we just booked a little studio, it was so small, it was a garage adapted into a studio. Cuco just recorded the guitar, that was the first draft, then we started talking about what we wanted to write about and we just wanted a couch love song. Something you can smoke weed to and have this Cali vibe. The challenge was I told Cuco ‘Hey, why don’t you sing your verse completely in Spanish and I sing mine, for the first time, my verse in English, and see how that goes?’ It felt very natural coming and going through the languages, and ever since, we became really close friends — the day we recorded it was a magical moment, the final version isn’t much different than our first recording of it. It was pretty cool, he’s a very talented kid and it’s always nice to learn from other artists.

What would you describe as one of the biggest hurdles of entering the music industry?

There are a lot — especially when you’re young. It’s hard being a Latina woman in music like they tell you how you should look like, how you should sound, everybody used to tell me I was a trap rapper, and there’s not a spectrum in the musical industry here in Mexico, they just label you out of anything. It’s hard because they don’t let you explore that much. They put women into competition every single time, if the new girl appears they just say oh she’s the new blah blah blah and there’s no space for us women to just do our shit.

Who has been some of your biggest inspirations and influences?

I always feel very drawn to the androgynous icons like David Bowie, Prince, Grace Jones. The idea of being iconic seduces me. I find inspiration in my parents, like my parents in the 80s and when I see their pictures, I don’t know something pops in my mind. I think I’m nostalgic for an era that I didn’t go through. I wish I was from the 80s sometimes. A lot of people have inspired me throughout the years like my friends, or people I had just met for a night and we have a long talk, that usually inspires me a lot, but this particular era inspired me a lot because the last time there was this idea of a utopical future, there wasn’t a lot of technological advances like now where we didn’t know what’s going to happen 30, 40 years from now. I like to fantasize about the future and I would love to know that feeling and experience that.

What direction do you hope your career takes in the next few years?

I want to get to the root of my music and get to the most organic, representation of the music I’m playing. I would like to have this big ass show, inspired by Marvin Gaye with like choir girls and two drummers, I don’t know that’s like my biggest show, having a badass, big ass live show. I’d like to keep touring and I’m not just going to do R&B, there’s a lot of genres and stuff I hidden in my music. I listen to everything, even salsa, boleros, anything. I listen to a lot of new wave from the 80s, like German New Wave. There are no boundaries in music and I just want to see how that goes but in my own language. I’m not scared to make music in English, but I feel the responsibility to explore in my own language is just beautiful. Spanish is beautiful.