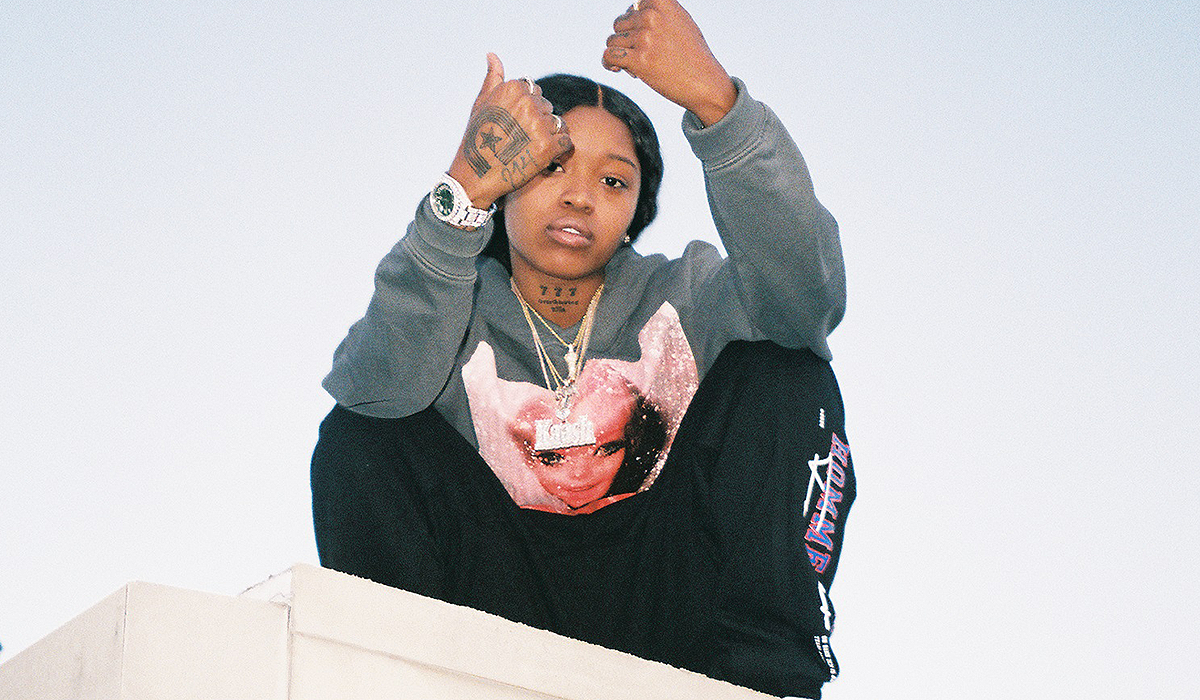 Maskne is real, get your skincare routines ready

Kaash Paige — self-titled guru, electric vibe tuner, and peace wizard — is no stranger to the world of emotions. The 19-year old Dallas-born R&B singer/songwriter dives deep into the ups/downs of sex, heartbreak, and fake friends, putting it all out on the table in her debut album Teenage Fever which dropped on August 14th. Kaash’s discography is an ode to the power of moving emotions from the body out into the air, into sound, onto a record. The project seems to innovate the themes of her intimate November EP Parked Car Convos which gave us the viral Tik Tok track “Love Songs,” the song you might not even know that you know.

Kaash spoke with NBGA  about her love for music and gloomy 2am drives, the keys to opting into peace and bliss, the magic of psychedelics and Jennifer’s Body, the 2009 dark comedy horror starring eternal It-girl Megan Fox which she’d soundtrack with her own track “Karma” if she could.

WHAT WAS THE INCEPTION OF YOUR LOVE FOR MUSIC?

I was brought into the music world by my dad. My dad always made beats in the closet and I’d hear them when I was in my room. I walked in to be nosey one day and he was like, Yo! I think you should take interest in music.‘Cause I always walked around the house singing. I was singing, like, old school songs. Etta James and Sam Cooke. A Change Will Come. But I was super shy growing up, I wanted to be in a group. I was never consistent about it until I got older.

YOU WERE SO YOUNG EXPERIENCING OLD EMOTIONS. IT CARRIES OVER PERFECTLY.

Haha, yeah. As a kid, I was watching Tyler Perry movies. Whenever you’re watching Madea movies, you hear these soulful sounds playing over moments of heartbreak. Those stuck with me. Same with the video games I’d play, all of the soundtracks with Nas and Logic and Kid Cudi. I played Guitar Hero growing up. I still love that sound. Vampire Weekend, Gorillaz. I love Nirvana.

HAVE YOU ALWAYS PRIORITIZED MUSIC? WAS THERE ANOTHER CREATIVE OUTLET THAT YOU PRIORITIZED FIRST?

I used to write a lot. I don’t really write anymore, but I used to write poetry. That’s just how I expressed myself. I was writing songs at the age of ten. As I got older, I got into poetry ‘cause I loved Erykah Badu and Lauryn Hill, that style.

YOU ENJOY THE SPONTANEITY OF EXPRESSION.

Definitely. I was like, damn, they make me feel super groovy. Effortlessly. They’re just chilling. I realized that writing was taking too long, so I started free-styling. Winging it. I went with the groove of the music. All of my songs from Parked Car Convos, all of the songs from Teenage Fever — they’re all free-styled.

WHICH PLACE OR MINDSET DO YOU WANT PEOPLE TO BE IN WHEN THEY LISTEN TO TEENAGE FEVER FOR THE FIRST TIME?

The best moment to listen to that project is under the influence. Everything sounds way better under the influence. You’re going to hear every instrument. If you’re in the car, you’re hotboxing the whip, you’re gonna hear everything. The bass is gonna hit different, the vocals are gonna hit different, you’re just gonna be able to really dissect the project. Unravel it all. It’s not just surface-level.

WHO OR WHAT OR WHERE IS YOUR MUSE?

In terms of places, I’m in love with Seattle. The gloominess. I’ve never been to Canada but I’m in love with Toronto. I like the aesthetics of the scenery. 2am summer nights, just driving. Late nights with your friends. That’s the energy that I really base all of my music off of. If we can’t cruise to my music, it’s not good. You feel me? I feel like I direct my music with that type of atmosphere in mind.

DO YOU HAVE ANY ARTIST INSPIRATIONS?

There’s no other artist that I want to be, but I listen to a lot of Frank Ocean. I feel like Frank Ocean doesn’t care. He’s a normal dude. If you see him at the grocery store, you’ll know it’s Frank Ocean, but he’s so chill about himself. Everything he does is like, this is me. It is what it is. What you see is what you get. I feel like that’s the type of direction I like to take. Drake, too. Drake is very vulnerable in his lyrics. I also like to talk about the things I’m really living, the emotions I have in my body.

IT’S FUNNY THAT YOU MENTIONED TWO SCORPIOS. THEY LOVE EMOTIONS. OR MAYBE THEY HATE THEM. BUT THEY HAVE A LOT OF THEM.

WOULD YOU SAY THAT YOU METABOLIZE CHAOTIC SITUATIONS QUICKLY?

Hell yeah, ‘cause it’s my peace. I’ve learned that through psychedelics. Learning to control situations and know your own boundaries is important. If you don’t want to go there, you don’t have to. I feel like it’s a mind thing. Maybe Capricorns just understand mind control. I know how to keep sane and be peace whenever I want to. I’m not gonna act like I don’t get irritated but I know how to opt out and enter a whole different situation, a new perspective. I’m either gonna smoke or leave it alone.

YOU MAKE THE DECISION AND THEN IT’S DONE?

Yeah, it just doesn’t bother me. The majority of situations that I’ve been through, I’ve put into my music. I made “Fake Friends” on Parked Car Convos the day after that, 5 o’clock on the dot, I got a cellphone call talkin’ ‘bout the girl I was talking to–she was a hoe. I literally made that song off of all the shit that was going on, I told that whole story. I have to tell some part of the story that I’m going through. “Fake Love” on Teenage Fever, I was going through the motions of losing friends, people were fake, my parents weren’t really understanding me. Everything I go through, I just put it into my music.

MYSTICS MEDITATE FOR YEARS TO GET TO THAT LEVEL OF CALM.

Yeah, it’s all music and expression for me. When you feel like you can’t talk to anybody — ‘cause I know some people vent on Twitter, but I feel like social media is something you should not vent on. For me, I feel like if I can vent to this song, or over this beat, or to this pen and paper, at least I feel like I’m not alone. At least I feel like someone is listening to me. I’m getting it out. It’s not always easy but you gotta get it out. No point in letting the stress build up.

DESCRIBE YOUR AURA IN THE THREE BEST WORDS YOU CAN THINK OF.

Goofy. Ambitious. Relaxed. I like to put people at ease. Electric relaxation.

WHAT DO YOU MEAN BY ELECTRIC?

My vibe is just gonna put you on the right wave. I’m chill but you can tell that I’m spontaneous. I’m that friend you’re gonna have your first trip with. I’ll put you in a good headspace. I’m a guru.

SHOULD TEENAGE FEVER BE LISTENED TO FROM BEGINNING TO END OR CAN THE LISTENER START ANYWHERE?

Yeah. I really got that method from Bryson Tiller’s T R A P S O U L. I was listening to “Intro (Difference)” and then it went into “Let ‘Em Know” — the different sounds, knowing how to lead one song into the next one, is really dope. You wouldn’t expect that. It’s almost like you’re listening to a story, like a book. You’re flipping pages.

IF YOU COULD GO BACK AND SOUNDTRACK ANY FILM THAT YOU’VE EVER WATCHED, WHICH FILM WOULD YOU CHOOSE TO SOUNDTRACK?

DO YOU HAVE A FAVORITE SONG FROM TEENAGE FEVER?

It’s gotta be between “Soul Ties” with ssgkobe or “London.” With Soul Ties, it was initially supposed to be “Love Songs 2”, but I felt like Love Songs 2’s just gotta be insane. Like, “Soul Ties” is still insane but “Love Songs” — that’s a whole different bracket. “Soul Ties” makes me feel like I’m losing somebody, like I can’t be without somebody. It’s the opposite of Love Songs. When I listen to London, it’s like. Okay! Let’s get it poppin’. When I made that song, it was Rolling Loud weekend. It was so fire. I was staying at The London for the first time. I had so many hunnies coming through.

WHAT IS YOUR PERSONAL SUPER POWER?

I can make people laugh. I can break the ice. I’m not an awkward person. I like to make situations less awkward for everybody else. I’m very blunt. If I see someone looking all awkward and tense and nervous, I’ll be like man, why are you being awkward? We vibin’, we good. You know? I like to make people feel more comfortable.

Exactly. I can peep energy from a mile away. I know if somebody doesn’t like me, I peep hidden agendas and bad intentions. I know how to read people.

WHAT ARE YOU WORKING ON NEXT FOR YOURSELF OR WITH YOUR MUSIC?

I’m ready for the damn streets to open back up! Aside from that, I’m vibing. I’ve been learning more about production. I produced on “Soul Ties,” I produced on “London.” I’m focused on enhancing my creativity, learning to produce so that I can produce for other artists. I love cartoons, too. I want to have my own cartoon one day. I wanna do a lot of shit. But this is a hard question to answer, ‘cause I really do just be chilling. I’m taking the days as they come.