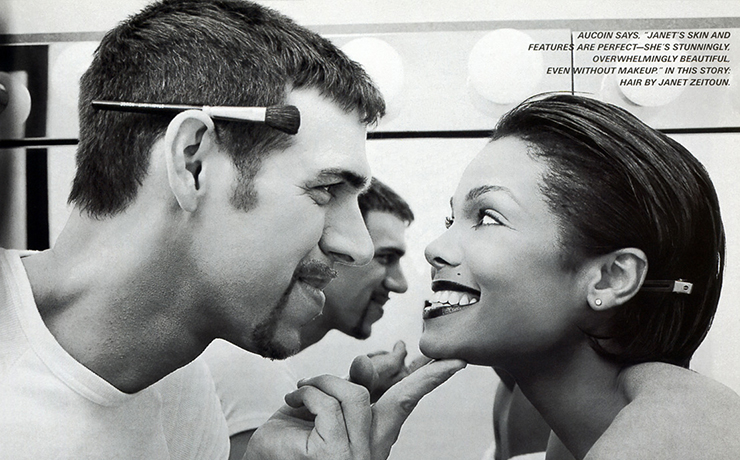 In conversation with Ramengvrl, the artist refining a new wave in Asian hip hop

They called him the “Michelangelo of Maquillage”. The makeup legend who lives on in his own namesake line and magazine covers many, many times over. Kevyn Aucoin, arguably one of the most important artists of the ’90s, started off in a small town, namely Lafayette, Louisiana. He was born to a single teenage mother and adapted by Isidore and Thelma Aucoin. His other three siblings were adopted as well. As a child, Aucoin expressed interest in the art of makeup very early. He frequently did his sisters’ makeup and took photos with a Polaroid camera, as he did throughout his career. Because he was afraid to buy makeup, he would shoplift it. Knowing he was gay at an early age, his own family become advocates for LBGTQ rights and started a chapter of P-FLAG (a gay rights organization) in his own hometown.

After undergoing sexual abuse and bullying in school, he dropped out and enrolled in cosmetology school, to take makeup classes. But his own self-taught skills earned him the title of instructor at just age 18. He then went on to work in an exclusive women’s store in Lousiana, but even then, women were too uncomfortable with a man doing their makeup, according to his own mother. After moving to Baton Rouge to escape the rampant homophobia in his own town, he soon feared for his life, even there. After this, he decided to move to New York City, where his career soon took off.

The Move to New York City

When Aucoin landed in New York, he did makeup on test models for free to grow his portfolio. Because of his popularity and skill, he was soon contacted by Vogue and contracted by photographer Steven Meisel. For three years, he did a total of 18 more photoshoots for Vogue. The supermodel Cindy Crawford and his makeup for her Vogue skyrocketed his name to fame. Soon after this, he could charge up to $6,000 per makeup session, and become one of the highest-paid celebrity makeup artists in history. He also refused to work with models who he felt were too young and pressured by the fashion and beauty industries.

Soon after his collaboration with Revlon, he was hired as their Creative Director for their line Ultima II, at the age of 21. He was responsible for the Nakeds line, based solely on skin tones and making sure there was a place for all women. This was a product line for white women, Black women, all women. He saw a place for everyone. It was a breakthrough moment in the beauty industry. This was a makeup line that took into account the undertones of skin, brown-based eyeshadows, lipsticks, and blushes. That neutral tone look from the ’90s we’re always trying to recreate? That’s all thanks to Kevyn Aucoin. His philosophy was to reveal a woman’s natural beauty and not cover her with tons of products. He was the pioneer for this type of beauty. Not surprisingly, this helped catapult Revlon back into the prestige market after years of decline.

After major success with Revlon, Aucoin was approached by Shiseido to work on their Inoui line. Shortly after this, he was approached by both Vincent Longo and Laura Mercier to endorse their lines but opted to create his own, Kevyn Aucoin Beauty, in 2001. During this time, he authored several books that spoke about industry-defining techniques like facial contouring. It was unknown in popular culture during the time but had been used in drag culture and stage makeup for decades. These books are regarded as makeup bibles.

His skills were unparalleled. Kevyn Aucoin was a visionary, trailblazing, and iconic. For Kevyn, he was willing to share his skills with anyone who wanted to learn. He was the first to welcome beauty enthusiasts backstage. His openness and connection with all walks of life were akin to his mission of accessibility for everyone. Kevyn Aucoin Beauty is a collection of cosmetics and tools that regard makeup as an art form. It is deeply rooted in values of empowerment, originality, and inclusivity. It is easy-to-use, multi-faceted, and fearless.

While working on this line, Kevyn began experiencing back pain and headaches and was diagnosed with a rare pituitary tumor. He had acromegaly that for most of his life had gone undiagnosed. He went through a successful surgery to remove it but still experienced pain. He soon died due to acetaminophen toxicity in October 2002.