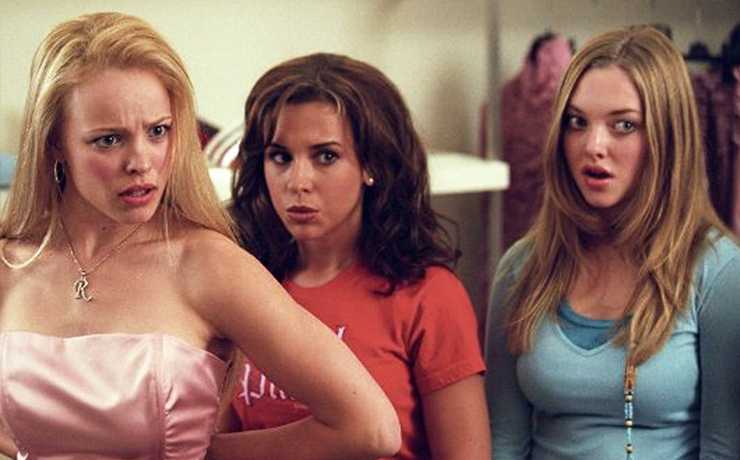 It’s October 3rd, also known as Mean Girls day. It’s officially been sixteen years since the now-cult-classic teen comedy — directed by Mark Waters and written by Tina Fey — stole the hearts of teenage girls everywhere, cementing itself as one of the most accidentally fashionable films of the 2000s. From Juicy Couture tracksuits to black leather mini skirts and slinky heels, the fashion in Mean Girls is just so fetch.

Without the work of New York based costume designer Mary Jane Fort, the movie would arguably not be as iconic as it is today. With a Bachelor’s in Fine Arts, costume design was never a plan of hers. She fell into the film business by accident, starting out working small side jobs with nonexistent pay until she eventually got the opportunity to design costumes for the 90s romantic comedy-drama Metropolitan (1990) — a small movie that attracted tons of attention. From that moment on, Fort fell in love with the art of costume designing. This love is what eventually led her to work on very well-known films: Like Mike (2002), Bring it On (2000), and, of course, Mean Girls (2004).

NBGA asked Mary Jane Fort: What was it like working on the set of Mean Girls? “It was so much fun,” she admitted. “And [it] was a very, very busy movie.” Each girl had about 40 costume changes in total due to the fact that the movie takes place over the span of a calendar year. In order to bring the world of Mean Girls to life, Fort did a lot of research, scanning through tons of yearbooks to get a sense of what teenagers were wearing at the time. The goal was to create a “heightened reality” especially when it came to The Plastics — Gretchen Weiner, Karen Smith, and Regina George. She envisioned these characters as “touchable but untouchable” and brought this aura to life by playing with different colors, textures, and silhouettes.

Their color palette was heavily inspired by candy and candy stores. “When you walk into a candy store and everything is bright and shiny, you want everything. As a kid, you want all the candy that you see whether it tastes good or not,” Fort states, when discussing the task of creating the desirability that The Plastics have and the admiration that they are able to obtain from their peers. In addition to that, the girls were all petite and small-framed so the tone on tone in the film “helped visually on camera, because it elongates figures and makes people look leaner.”

The Plastics were a team. They had a certain uniform that kept them united while at the same time expressing their unique energy as individual characters. In order to differentiate Regina from Gretchen and Karen, she was always dressed in a slightly sexier fashion than the rest. Gretchen had more of a preppy, conservative style while Karen’s looks retained a sense of childlike wonder that paired well with her general cluelessness. Even when Cady joins the team, she merges all three of their styles into one. Fort wanted to make sure that what the girls wore looked as if they “got it out of their closet.” The Mean Girls style, while being a total exaggeration of what you might have been wearing in high school, is still down to earth. The girls are rarely seen in designer, with the exception of Regina’s cherry blossom Murakami Louis Vuitton bag, her LV matching belt in the stairway scene, and her two Fendi purses that we hear about throughout the movie but never actually see.

Due to their somewhat limited budget, Fort couldn’t just buy designer willy nilly. She was forced to go outside the box and create pieces such as the now iconic printed “A little bit dramatic” and “Socialite” tees.

For example, the Halloween costumes that The Plastics sport were all custom-made and was created with the intention that they’re still teenage girls. “I didn’t want it to be too provocative […] I hope it was funny enough and it was pushing the envelope just enough because this movie really is meant to appeal to a teenage audience.”

This explains why their sexy Santa costumes didn’t make them look more promiscuous than intended. It had just the right amount of sexiness to keep it PG, because it was also definitely humorous. “I created those [costumes] and I wanted it to be something that they would probably come up with themselves. I did have the plastic skirts made with the marabu spray. And then the tight tops and boots I just bought and then added the marabu and fur.”

Costume designers tell a story through the clothing. The last scene of the movie shows Regina George in muted colors, wearing jeans for the first time in forever. This is style symbolism: Regina has let her guard down and is not quite who she used to be at the beginning of the film. Cady also sports jeans but her outfit vastly contrasts her first fit in the film as it demonstrates that she’s more confident in herself. According to Fort, “[costume design] is not so much approached from a fashion point of view, it’s a story. And that’s what a costume designer really is, a storyteller.”

It’s evident that the impact that Mean Girls has will never go away. Nowadays, early 2000s trends are making a cyclical comeback. Mini skirts, micro handbags, and baby tees with sassy slogans are all the rage just like they were when The Plastics ruled the halls of their high school. Thanks to the design work accomplished by Mary Jane Fort, girls are able to express their femininity and power in a way that is both playful and empowering. She teaches us that, in terms of fashion, the limit does not exist.