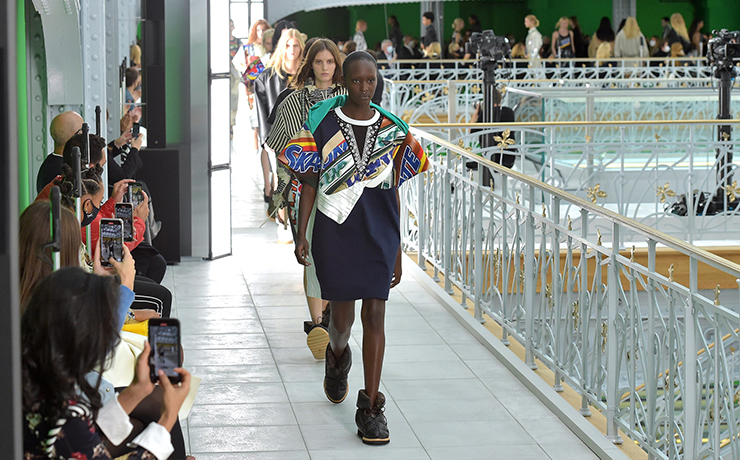 As Paris Fashion Week comes to a close, we’ve been treated to a month of never-before-seen virtual and digital delight. For months now, we’ve been separated from our usual physical indulgences and it made one wonder, how will the creative industry succeed in a world that’s in the midst of a pandemic? Not surprisingly, we were shown that from challenge grows the most innovation. The Fashion House of Louis Vuitton sparred no inkling of beauty when it came to their SS21 show. Set in La Samaritaine on a multi-layer backdrop, LV reiterated that space should not be an obstacle, but a modification for the better.

With deep house playing in the background, models walked a runway amongst masked industry veterans, displaying Nicolas Ghesquière’s newest collection. Guests like world-renowned DJ Peggy Gou and Venus Williams flocked to Paris to see what fashion could look like in a post-coronavirus world. The lower levels of La Samaritaine were blocked off with green screens before the show began, only to fill with clips from the Wim Wenders film Wings of Desire. The seating was also used as a projection screen, immersing the audience into la monde de Louis Vuitton.

Chunky chains adorned the necks of many of the models, as well as larger than life belts. The jumbo accessory seems to be a major trend of this fashion month. An ode to the ’80s was also present in this collection, along with many others. Nicolas Ghesquière predicts the industry is turning towards genderless apparel and inclusivity, which was a given in many of the brands that held shows this season. For him, his muses were nonbinary people, who are breaking the barriers between masculinity and feminity.

Some of our favorite looks included the incredible, multi-colored trench coats that we’ll be vying for once spring is in the air, the Vote tee that displayed the importance of having our voices be heard, and the cool, industrial cargo pants we saw in several iterations on this runway. Of course, we have our eye on all of the accessories that were shown yesterday, from the sneakers to the tiny, structured bags. Once again, we were blown away by Louis Vuitton’s commitment to change, revolution, and adaptation. Bravo, Louis Vuitton! It looks like even in an industrialized, futuristic world, we’ll still be adhering to the rules of fashion.