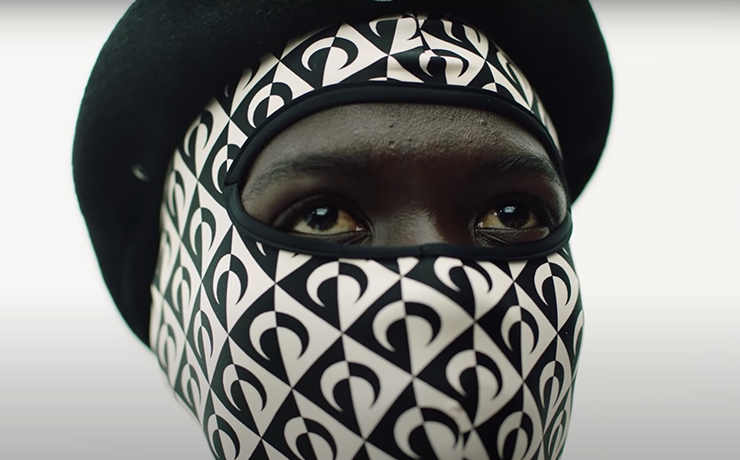 Balmain SS21 was all about neon, glitter, and glam

Parisian designer Marine Serre channeled the doom of psychological thrillers with an intensely cerebral short film titled AMOR FATI. Serre teased the production for Paris Fashion Week with a handful of trailers on social media, starring musician Sevdaliza and artist Juliet Merie. According to the synopsis, “two cryptic individuals navigate between parallel existences, living an astral projection, guided by each other’s truths.” It’s giving The Matrix — apocalyptical and tactical, this SS21 collection is futurewear at its finest.

Directed by Sacha Barbin and Ryan Doubiago, AMOR FATI finds its stars occupying multiple roles and inhabiting different worlds that all indicate uncertainty on the horizon. In each arena, the residents fiercely protect their space. Every terrain of the film presents a new opportunity to show a variation on preceding Marine Serre designs — the crescent motif that has become synonymous with Serre’s name is used symbolically throughout. The music is haunting and the characters interact on non-verbal cues; the clothes speak volumes here.

We first meet our protagonist Res (Merie) as they lie naked on an operating table in a stark white room. In uniform fashion and a serious demeanor, a set of surgeons approach Res while sporting the repeating black-and-white “Moon Lozenge” pattern from head to toe. AMOR FATI is not necessarily a “choose your own fate” type of experience, but viewing the interactive movie on its official website enables an option to share your favorite looks and get details on each model and their assigned role in real time. With the added context of these tarot-like casting cards, you can further see the thematic overtones implied in each costume.

The first aid staff appears next in black utilitarian staples — their sleek trenches and overalls have necessary survival tools attached. The attire of each first responder is proper, fitted, and reserved; their ensembles are accessorized with monogrammed flat caps, face shields and gloves. The doctors apply the crescents all over Res and place a silver compass choker on their neck. These tattoos create a look similar to the highly coveted Marine Serre bodysuit (as worn by Beyoncé and Dua Lipa). This moment also ushers in the first encounter between our two protagonists.

The characters’ eyes serve as the portal to each other’s souls and certain treasures hold symbolism between them. The Breath of Fire (Sevdaliza) appears from a cloud of dust and leads the moon-covered Res to a new world, while wearing an oversized red paisley carpet hat and a coordinating dress. In a foggy red-orange desert, the moon salutators engage in a ritual of love by repeatedly hugging each other. Compared to the first set of characters, the moon salutators are bohemian, eclectic, and free-spirited. Their hands are covered in black paint with distinctly-sharp nails.

From this warm terrain, the setting shifts to a climate that appears much colder and clinical. The Hybrid Nautilus (Merie in a navy blue bodysuit and beaded dress) bypasses a collective of shrouded statues in elaborate jeweled masks and bauble-enhanced nails to sync up to the Memory Hub (Sevdaliza). The moon design has transformed again and we see the Memory Hub wearing a cyber-esque “Moonfish Skin” catsuit in shades of blue — reminiscent of Jean Paul Gaultier’s iconic Cyberdot print from 25 years prior.

In the blink of an eye, our Awakened Icon (Sevdaliza) is suspended in the air. Rocking a tactical hoop skirt and harness over one of Serre’s bodysuits, the Awakened Icon then confronts a mysterious figure who stands in the distance. Identified as our Sleeping Icon (Merie), the person is covered by a black cloak emblazoned with a vortex insignia. Following an intense stare down and a retrieval of the compass choker, the screen pans to our first protagonist lying down in the white room again and the twisted cycle repeats.

Watch AMOR FATI and absorb the looks as many times as you like since the experience plays on loop continuously. After all, what is time anyway?