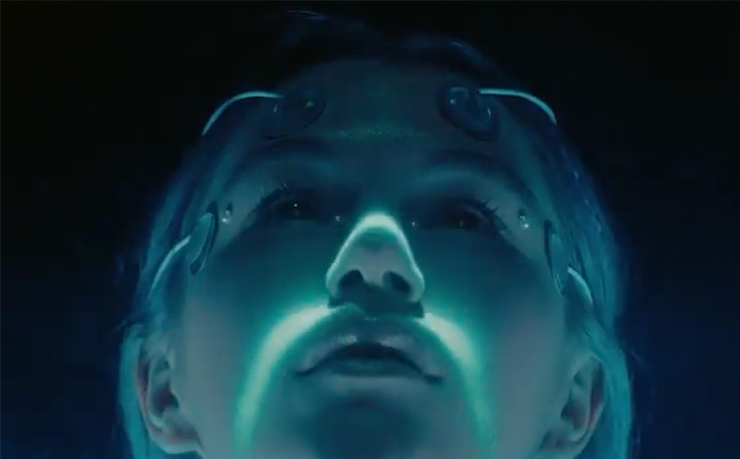 Her descriptions seem to leave the door wide open, but they accurately prepare a listener for the world of her discography — a world in which her futuristic, innovative sound reflects the addictive social media atmosphere that we willingly immerse ourselves in as observers and participants. Twst’s music is made to be on replay. Her lyrics focus on stories about our digital identities with sound mixing from Rob Kinelski — the same Grammy-award winning sound engineer who works with Billie Eilish. With these components, twst’s sound and persona project the hologram of a pop star from the future.

This impression becomes clear through self-produced songs like Always, a song confirming the sanctity of a friendship and connection, but with a Siri-like voice answering the lyric, “You’ll be there?” with an automated “Always.” Or with Girl On Your TV, where the disconnect between a public figure and their audience highlights the warped nature of obsession, perception, and the digital relationships we have—or perceive to have—with others.

“As much as my music is post-ironic, social commentary, Internet troll-ey,” twst writes in my email exchange with her, “the core of what I create always comes from a very vulnerable and truthful place. I also want people to know that I’ll never make two records that sound the same.”

Songs like sad girls club but u gotta be cute, Are You Filming Me, and even the remixes of her music mirror this comment. There’s an unmistakably catchy and upbeat pop quality to the sound, tempered with lyrics that turn those bright beats upside down. In sad girls club but u gotta be cute, twst croons, “I like myself best alone in my room / And you all like me best that way too / ’Cause I share what I like and you like what I do / But Friday night, you don’t take me out with you.”

The loneliness bubbles up and pops throughout the succinct, smooth flow, and brings the melancholy aspect of twst’s music to life. In her musical atmosphere exploring digital personas, this described detachment peppers her light melodies with an extra dimension. Twst in fact writes and records much of her music in her own room, which can ironically aid in bonding the listener to her, even if the topic is disconnect.

Twst’s image melds well with her sound – whether on YouTube or Instagram, she often comes to us from webcam or Apple photo booth-quality pictures imposed over digitized images, or illuminated by the light emanating off of a screen. The backdrop for the song Are You Listening’s music video scrolls through a green screen of the endless news, pop culture, and entertainment options that can meet us online every day. Twst navigates it all with a sound that somehow keeps up with all of it.

Much like the theme of her lyrics, twst and I communicate virtually. I ask what intrigues her about our current digital landscape that her music seems to live in and play off of. She writes back, “I left home when I was really young and didn’t have much in the way of a traditional relationship with social institutions, i.e. school. So I spent a lot of time on my own on the Internet, and I always felt like I was very much brought up by the Internet. So personally I feel like so much of my identity was formed through my relationship with the Internet. That makes me very interested in deconstructing online identities and exploring what that means.”

She’s currently excited about the new music she’s making. “When you write something that has accessed those parts of you, it’s mad cathartic,” she writes. She notes that it’s not an easy process, but that the result is always worth it.

Listening to twst, it sounds as though she’s bringing us her current perspective, mixing, and storytelling from the future, but really, it all feels very much grounded in our current reality. That’s what resonates. That’s the twist.

IG and its strange mutation of style and self