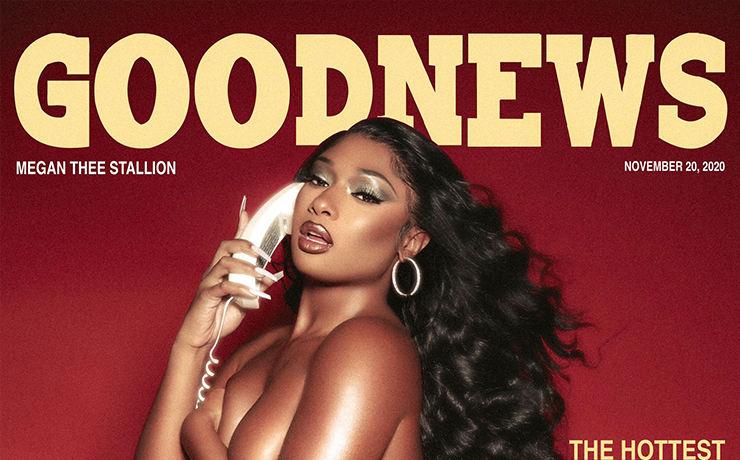 This year has been quite a rollercoaster for Houston rapper and certified hottie Megan Thee Stallion. Although she was injured in a traumatic shooting incident with Tory Lanez this past summer, Megan is undoubtedly rapper of the year, as announced by GQ earlier this month. She has a lengthy list of accomplishments, like her Platinum collaboration “Savage (Remix)” with Beyonce and her hit-song “WAP” with Cardi B. She’s performed for Saturday Night Live, The Tonight Show Starring Jimmy Fallon, and Jimmy Kimmel Live. She’s tied with Drake and Justin Bieber for most award nominations at the BET Hip Hop Awards and People’s Choice Awards. She advocated for Black women in her New York Times op-ed and launched the Don’t Stop scholarship fund for women of color. And most recently, she’s curated her very own Fashion Nova collection.

Now, Megan has gifted fans with her first full-length album titled “Good News,” with her album visuals incorporating some of many headlines highlighting her success this year. Megan announced the album on November 12 via social media, where she said, “Hotties, I first want to say thank you for riding with me, growing with me, and staying down with me since my first mixtape Rich Ratchet! Through this rough ass year, we’ve all been having I felt like we could all use a lil bit of good news. So with that being said MY OFFICIAL ALBUM “GOOD NEWS” IS DROPPING NOVEMBER 20TH PRE ORDER WILL BE AVAILABLE TONIGHT #GOODNEWSMEGAN.”

“Good News,” which includes high-profile features from artists like SZA and Big Sean (just to name a few), is a fiery “fuck you” with no room for bullshit. Keeping her signature flow with a few surprises (like her vocals on “Don’t Rock Me to Sleep”), Meg exudes confidence and strength which is both empowering as a listener and reassuring as a fan.

Most notably, Megan opens her album with her diss track “Shots Fired,” which samples Biggie’s “Who Shot Ya” (1994). Although she refrains from naming Tory Lanez, the song is the epitome of “f– you,” and it serves as the end to the conversation around the shooting and parallels to violence against Black women and justice for Breonna Taylor.

Just to save face for rapper niggas you chill with

You in your feelings, I just thought it was another Thursday

Along with the album, Megan shares a new music video for “Body,” a real hot girl anthem that includes surprise cameos like Taraji P. Henson, Jordyn Woods, and more. “Body” features jaw-dropping visuals, scathing choreography, and an addictive melody. I’m not gonna lie — the chorus “Body-ody-ody-ody-ody-ody-ody-ody” is bound to be on repeat for the rest of the year.

Overall, Megan’s 17-track album is a message to haters and toxic masculinity while carrying on with business as usual with steamy lyrics, partying, and words of self-love. You can now listen to “Good News” on all streaming apps now.