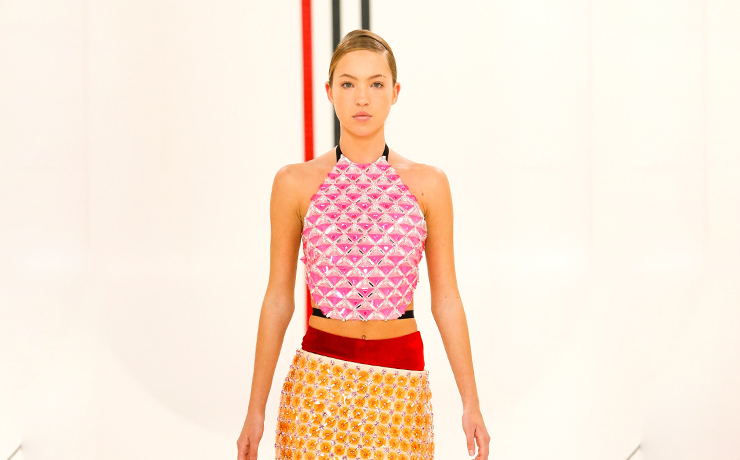 Miu Miu’s Spring-Summer season show was a sporty take on classic formal wear. The show follows the current pandemic producing trend of shows that are uniquely digital and physical  in make up, with in-person models and a virtual audience both contributing to the overall environment and mood of the concept. The remote audience dressed in their own dreamy Miu Miu pieces, included a slew of high profile guests placed on a bubblegum pink backdrop, consisting of completely all women that are characteristic of Miu Miu’s feminine and youthful spirit.

The soundscape greets both the at-home and at-show patrons with an adrenaline inducing collection of shouts and cheers formally found at an arena. Flooding one with the same sort of exhilaration and adoration for an expectation of what knowingly will be a glorious match, and this match takes place on the field of what has been coolly dubbed as the “sports club”. The set is an artistically rendered athletic stage for models to represent the playful ensembles and sportive accessories of newly paired co-creative directors, Miuccia Prada and Raf Simons’ vision (who had just held an insightful conversation at the conclusion of last week’s Prada show into the two’s dynamic that can be found on YouTube).

The collection gave Posh Spice meets Sporty Spice realness, as the brand took on evolving traditionally pragmatic forms of attire (such as track jackets and simple line coats) and making them more tailored towards the chic woman. Utilizing vibrant hues with monochromatic color blocking for the construction in both individual pieces and the overall fit, they created a colorfully deconstructed kaleidoscopic ambience. Soft plaids and stripes, and fun bright-colored tights (dressed under split thigh mini skirts and dresses a catching ode to the 1960’s) were some of our favorite concepts. Along with the set of geometric patterned heels, soccer cleats made into low heels, and reflective chrome mules that were just so delightful.  Classically brand specific jeweled and pearl textures were seen on pieces ranging from halters to collars to bags made for Sunday brunch with the girls.

The convergence of revering the human form, appealing to the girl at heart, and recognizing life’s necessity of working while you play, is a feat that does not go unnoticed, proving this season a deserving win for Miu Miu.

Olivia Rose is bridging the gap between plants and luxury streetwear

Lous and the Yakuza enchants us with “Gore”