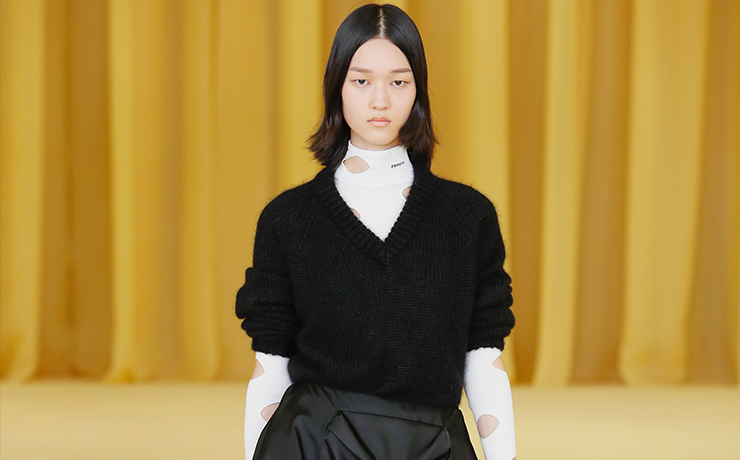 Catwoman, catsuits, and the captivating allure of confidence

Prada’s SS21 women’s wear collection is the essence of Prada. Unveiled on Prada’s Instagram and Prada.com, models emerged onto a yellow stage with bare faces and no hairstyling apart from straight bangs. Roving cameras were visible following the runway models as they stepped forward, but many of the angles and shots focused on the models’ faces, who were looking directly at the viewer. The gaze was fierce, and held authority. What else could we expect from Prada?

Miuccia Prada worked with Raf Simmons—who was named co-creative director of Prada in April 2020 and is known for his work at Dior and Calvin Klein—for the first time to create Prada SS21. “This is a collection about what Prada means,” Miuccia said. “The concept of Prada. Finding what Prada can mean today, with another perspective, another point of view.”

With their debut together, Mrs. Prada and Mr. Simmons paved the way for their path forward, and left the door open to possibilities. Many points of view were certainly present – in the filming and in the fashion – but they did not clash. The triangular Prada emblem remained a focal point of many of the pieces, which started out with basics: nylon pants and tops with wraps in black and white, pink, and polka dots.

Knits were then overlaid on turtlenecks, with luxuriously-pleated skirts that floated down the runway. Staple Prada handbags and candy-colored kitten-heels were the accessories, and the triangular Prada logo was reimagined as earrings as well. Thick trench coats boasted timeless class, and patterns made their presence known as the show progressed. The construction and tailoring echoed the mood: unrestricted, and foundational.

The collection is called Dialogues, and it reads like the conversation is just starting.