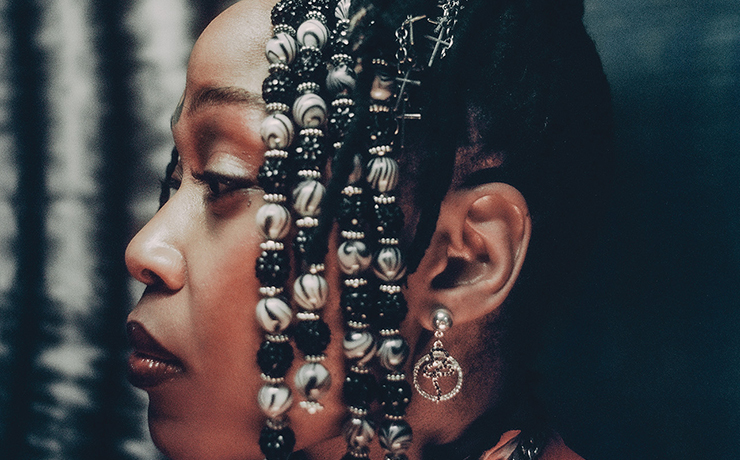 “If you can’t wait, don’t order.” That’s the current tagline on the Instagram page for Mutha Magick Apothecary, the brainchild of rapper BbyMutha (née Brittnee Moore). With a lead time of 4-6 weeks, the message is a reminder that quality takes time. But also be patient with Moore—as she’s the sole artisan whipping up these topical concoctions.

“I still feel like I don’t know exactly what the fuck I’m doing,” she revealed to NBGA over the phone. “But I’m figuring it out day by day, because it’s not so much about the business for me. It’s about providing the service and helping people.”

Mutha Magick Apothecary launched in February 2020. BbyMutha took a leap of faith and invested in her company using money she earned from touring with Earl Sweatshirt and performing at festivals in Europe. What originally stemmed from a trial of selling rosewater toners and sex magic tinctures through Facebook three years ago has grown into the shop that fans can access online today—with a brick and mortar shop currently in development.

Each week, the artist updates fans of the apothecary via social media, typically divulging what’s in production at the moment. Mutha Magick’s online shop opens up on Fridays promptly at 4:44 P.M. Prior to opening, BbyMutha will unveil the latest offerings on Instagram. Many of the product names are mystical in nature (Selenite, Fire Faerie, Lilith’s Bedroom) with a taste of seduction (Sex God). Clay masks appear in the form of honeycombs (Guns & Roses) and soap bars are made to resemble feminine bust sculptures (Mama Bars). Once her shop opens, it stays accessible for most of the weekend or until listings sell out.

Prior to securing the lease for a building in her native Chattanooga, TN the Muthaleficent rapper was working out of her brother’s kitchen. “I literally only have one blender,” she shared. “I have a stove but this is my brother’s house and he has roommates so I try not to occupy more than one eye on the stove. Just in case n****s gotta cook, you know?”

At the time of the interview, BbyMutha had over 1,100 orders in her queue. She has had to address public concerns from customers who expect to receive their products quickly. It’s a common experience in terms of demand from a small business owner, but especially for one who’s also a well-known rapper and mom of four children. These complaints affect the artist personally as she doesn’t like to disappoint people. She is a proponent of creating with intention, which she previously explained during an Instagram Q&A. “I trust my energy and I trust my process. I don’t even work on products if I’m in a bad mood or angry,” she shared. In conversation, BbyMutha attributed this to her belief in energy transference. “I definitely don’t want to be in the kitchen mad at my boyfriend and making a love [body] butter!”

She sets this type of boundary around creating for Mutha Magick, just as she does for her music career. When it comes to music, it’s her prerogative to release tracks whenever she wants. In terms of the apothecary, however, the rapper says it’s worse on her as she understands the expected standard once people have spent their money.

“People can be mad all they want to if I don’t release music. But these people have already given me their money, so being the type of person that I am, I feel guilty for taking so long. But it’s literally out of my control.” She recently tweeted that her shipping platform caused technical difficulties in accessing some orders and she has been transparent with updates on recovering this information. “People don’t care about your intent; they just want their shit. And I feel them. If you spent your money, you should be able to get your shit. You will, just not on Amazon time.” Unlike major retailers, Moore prefers to send the orders out in full and this can take some extra time depending on the availability of supplies. “When your order is complete, then I ship your package out. But until then, I’m not going to send you no half-done orders, especially because I have to pay for the shipping labels and you only paid for shipping one time.”

While she understands her customers’ frustrations, she also attributes this to a societal tendency to complain. She orders from independent businesses often and respects the timeline for producing handmade goods. “As of late, that’s like 90% of my shopping,” BbyMutha said. “It’s just something about somebody making something with their hands that feels a whole lot better. And I respect people’s time. I respect the fact that sometimes you wake up and you don’t feel like making shit. I respect the fact that you do have to use your energy and sometimes you just can’t work at a factory rate.” In terms of her own creation process, the hours are long depending on the product being made. At times, it can range between 8-16 hours to finish one batch of body butter — which yields about ten individual jars to sell. It’s a delicate process that Moore prefers to do by hand.

“I consider my practice love and sex magic, if nothing else. I respect pure, raw emotion. So I really like working with aphrodisiacs,” she revealed.  Among BbyMutha’s favorites are damiana, roses, cranberry seeds, and avocado oil. She also believes in the power of relying on things that make you feel safe, even when you’re feeling down. “I was talking to a friend the other day and we were talking about showers as our favorite ritual. It just feels like it washes the bullshit away. I know it’s not possible on a medical level, but it helps.”

BbyMutha follows the cycles of the moon, which explains her deep connection to water. “I worship the moon and because the moon controls the water, I kind of feel in a way taking showers and baths are like giving the moon a hug.” This, in addition to applying her favorite scents brings her relief. “To be able to go get under the covers, smoke a blunt, smelling like that scent is just comforting. It’s kind of hard to be ‘sad’ when you smell good.”

“While I know depression is something more severe than that, for rituals, get something that makes you feel comforted.” She acknowledged that these are balms for the moment and lamented how often people hone in on depression when there are a spectrum of mental conditions. “There are scents that make me feel safe. Sad Girl Potion is one of them,” referring to one of her topicals for self-care rituals with notes of lavender and black jasmine. She also mentioned the softness of Mutha Moon — a patchouli, sandalwood, vanilla blend that she likened to a grandmother’s embrace. Like many of her blends, these are available in oil and butter form.

The rapper champions sensory experiences when it comes to manifestation. She uses glitter for the visual effect, but also because it’s on brand for the type of sparkly magic she does. “If you have a visual and a scent, it just helps with the manifestation process.”

Sandalwood and cannabis are among BbyMutha’s personal favorite scents. Due to legislation around the latter, she substitutes use of the plant with fragrance oils or catnip in products where it could be beneficial (for instance, in performing astral work). She eventually plans to move to Portland, OR, where state legislation around cannabis would allow her to infuse products with the plant. BbyMutha favors the goddess Aphrodite and enjoys working with crystals known to cultivate loving and creative energy like rose quartz, citrine, and lapiz lazuli.

When asked about bringing in additional parties for support, the rapper leaned towards teaching and trusting her loved ones. “My recipes are intentional and I don’t want anybody taking my sauce. You know your grandma got a spaghetti recipe and she don’t tell nobody? It’s because she makes her spaghetti with intention. So, it’s the same thing and I’ve had friends take from me. I love to talk and I know I talk too much sometimes,” she shared. “It’s too much of a slippery slope out here, especially for black women creators, where you can get stolen from and people can run off with your swag so easily. So it’s not to be selfish, but as far as the creative process goes, that’s all mine and my daughters. That’s for us.”

In terms of music, BbyMutha is working on a mini EP and documentary. While there’s no release date yet, the project will be available exclusively on OnlyFans. “This is content people are gonna have to pay for. I’ve made the mistake of being too intimate with my fans in the past for free.” Most recently, she debuted her long-awaited double album Muthaland and had a feature on Black Noi$e’s track with the same title as the apothecary.

“I feel like the products that I make are worth the wait. I only use my stuff now. I just wish people would trust me, especially if you see other people getting their orders and especially if you have already received an order in the past; you know I’m good for it.”