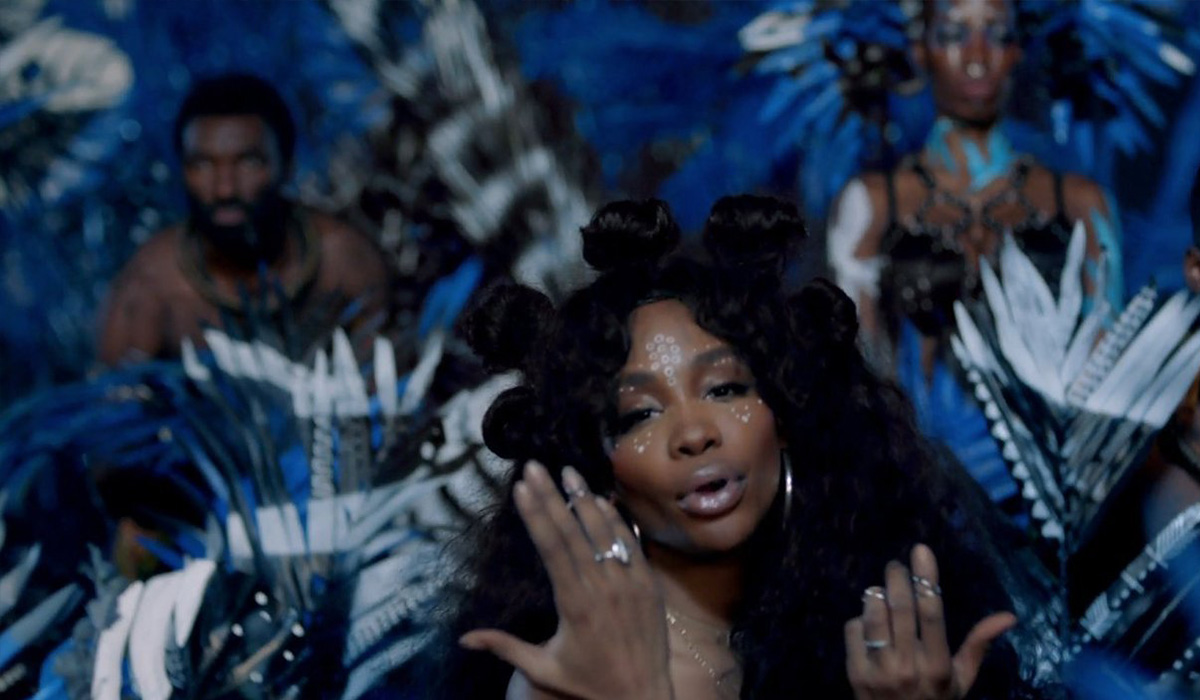 So the new Black Panther movie is killing it at the box office and on the Billboard 200. Last weekend, the Marvel Cinematic Universe’s latest instalment opened to record box office, debuting at a measly $235M (absolutely destroying all its competitors). The movie consists of a largely black cast, helmed by a black director, and set in a fictional African country (Wakanda), where the vivid art, costume, and makeup designs were all inspired by real-world African tribal traditions. It’s definitely something new for not only Marvel films, but for the global audience, too. Its release is a historic, important moment for black Americans, and the response has been positive and enthusiastic across the board.

Even Michelle Obama, who has a very restrained social media presence these days, and almost never uses her platform for anything other than political statements, has taken to the Twittersphere to praise the must-see pop culture event.

“Congrats to the entire #blackpanther team. Because of you, young people will finally see superheroes that look like them on the big screen. I loved this movie and I know it will inspire people of all backgrounds to dig deep and find the courage to be heroes of their own stories,” she Tweeted.

Not since Spike Lee’s “Malcolm X” in 1992, has there been so much hype and hope for a movie among African-American audiences. Luckily, the film has not disappointed the masses. I had a chance to watch the movie in theatres last night and all I can say is wow. I found it to be gripping, visually compelling, well-written, terrifically acted, and moreover, I was deeply moved by its message — that race is not an obstacle to success.

But enough about the movie, let’s talk about the soundtrack! Curated by Kendrick Lamar himself, it’s no surprise that the Black Panther soundtrack has also debuted at No. 1. Rolling Stone has reported that Black Panther: The Album sold 154,000 copies in its first week of release, of which more than a third of those were traditional album sales. Co-produced by Lamar and Top Dawg Entertainment’s founder/CEO Anthony “Top Dawg” Tiffith, the soundtrack is a bit unconventional, with only three of its 14 songs actually appearing in the film. The remaining 11 songs are inspired by the motion picture. Nonetheless, Lamar is listed as a songwriter on every single track!

Kendrick had this to say about the project last week:

“Respect to all the artist/producers that allowed me to execute a sound for the soundtrack. The concept of producing and composing a project other than my own has always been ideal. I appreciate the experience loved ones. Continue to be great.”

Kendrick also had much praise for the movie itself, stating in a press release:

“Marvel Studios’ Black Panther is amazing, from its cast to its director. The magnitude of this film showcases a great marriage of art and culture. I’m truly honored to contribute my knowledge of producing sound and writing music alongside Ryan and Marvel’s vision.”

The soundtrack is chockfull of epic collaborations, including the likes of The Weeknd, Jorja Smith, Future, Swae Lee, Khalid, Travis Scott, SZA, Jay Rock, Ab-Soul and more. Among my favourite tracks from the soundtrack are “X,” “The Ways,” and “All the Stars,” the latter of which came to life in a music video that dropped ahead of the film’s release.

The video for Lamar’s song which features the ever so talented SZA, already has more than 43 million views on YouTube. The video takes Lamar on a visually stunning voyage to Africa, and embraces African imagery in a way we haven’t seen in hip hop since the ’80s and ’90s. Loaded with symbolism and references to the Africa’s many cultures, the music video for “All the Stars” is as vibrant and colourful as the movie itself. I highly recommend having a watch, here:

The first music video for the film is not only a compelling celebration of African heritage, but it has also brought Afrofuturism back to center stage in hip-hop.

According to Wikipedia, Afrofuturism is:

a cultural aesthetic, philosophy of science, and philosophy of history that explores the developing intersection of African/African-American culture with technology. It combines elements of science fiction, historical fiction, fantasy, Afrocentrism and magic realism with non-Western cosmologies in order to critique the present-day dilemmas of black people and to interrogate and re-examine historical events.

Placing African people, culture and tradition at its center, Afrofuturism began in the twentieth century but is now experiencing a renaissance as Black Panther has brought it into the mainstream. Of course, stars like Beyoncé, Rihanna and others have also drawn on Afrofuturism as an influence. Recall Rihanna ending her 2018 Grammy performance by doing a South African dance called gwara gwara. How about the recent French Montana video for “Unforgettable,” which was filmed in Kampala, Uganda.

If you haven’t seen this brilliant movie yet please do yourself a favor and GO WATCH IT! While you’re at it, make sure to cop the soundtrack and check our SZA and Lamar in the “All the Stars” video. You won’t regret it!