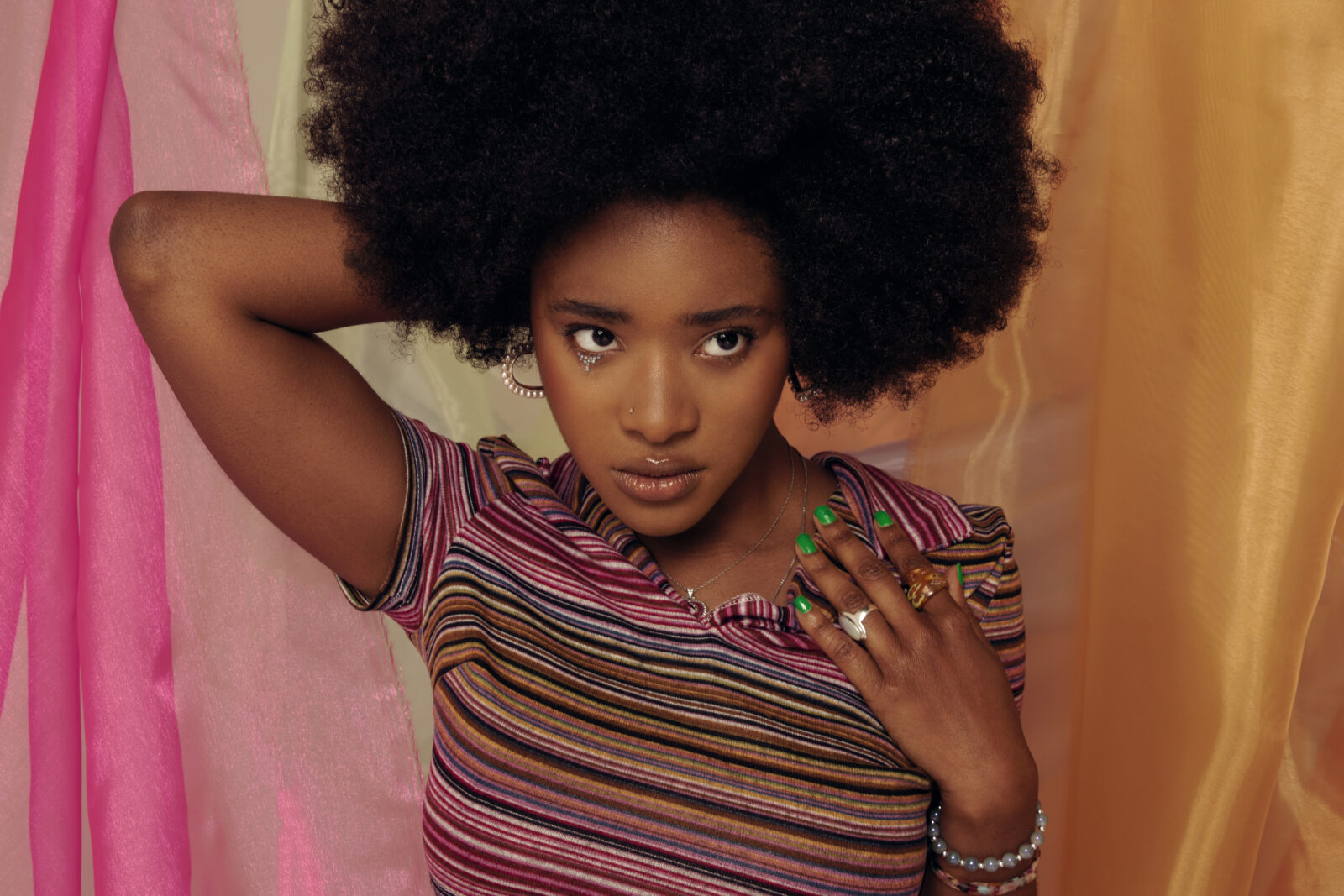 With her distinct sound and free-spirited style, Peyton has been a staple on the indie R&B music scene over the past few years. The Houston singer-songwriter enchants listeners with her soulful range, playful visuals, and relatable lyrics. Her music has earned her many loyal fans, including media maven Issa Rae — who has featured tracks like “Sweet Honey” and “Lifeline” on her HBO series Insecure — even recently inviting Peyton to join the songwriting camp for the show’s final season.

On PSA, her debut album out now on Stones Throw, Peyton lets the world know that she’s got something major to say. NBGA caught up with her to discover more on the project and the inspiration behind it. Across the album’s 31 minute run, Peyton perfectly blends various elements — notably trappy drums, wavy refrains and rising synths — to create a dreamy sonic landscape, full of possibilities. Themes of hopefulness and resilience resound through singles like “Let It Flow” feat. Brice Blanco and “Don’t U Wanna Fly” — coming full circle on the album’s closer, an interpolation of “Pure Imagination” (the 1971 track made popular by the film Willy Wonka and the Chocolate Factory.) Peyton also worked with producers like Chris McClenney, JULiA LEWiS and Chase of Nazareth to bring the album to fruition.

When asked what she grew up listening to in Houston — where her late grandmother Dr. Theola Booker was a prominent gospel singer and composer — Peyton provided an expansive list of genres, citing everything from gospel to hip-hop, jazz to house music. “I listened to a lot of stuff,” she told NBGA. “I was just such an impressionable kid, experiencing so many different art forms — and everything already seems so amazing when you’re a kid. It was an overload of learning and immersing myself in great music. I listened to everything I could get my hands on.”

The musician also filled us in on her production process, what she’s currently listening to and the surreal experience of hearing one’s own music on TV.

NBGA: PSA is such a gem — throughout the 12 tracks, your artistic range and colorful vision truly shine. When did you first begin working on the project?

Do you remember what song you first started with?

In the video for “Don’t You Wanna Fly,” there’s a beautiful visual commentary between you and your inner child. How did you develop the concept for that song and visual?

It just came naturally because of the lyrics, because, I’m saying “I’ve known this feeling for my whole life. I’ve gotten older and forgot what it’s like, but it’s always here inside.” So just going back and forth, showing that I’m still that kid.

What influenced your light-hearted visual for “Let It Flow?”

What inspired it was my mom’s hometown, which is where we shot it — Liberty, Texas. The song is just about following your path, trusting in it, and letting go of any anxieties about your path. Just go with the flow because you know what you’re doing. Even if you don’t know the outcome, it’s something in you that’s telling you you’re on the right path. So go with it, you know? So really just finding inner peace, being at peace, and just feeling balanced. I would say my mom’s hometown is a second home and a place I definitely find solace in. So, I just thought it would be an awesome thing to film there and just be in the country. Being in a place where it’s very important to me and doing something that I love on that scale in my mom’s hometown — it was really awesome.

What’s an aspect of Houston culture that you believe is underrated?

Anytime people think of Houston, they think of the old sound and just only think of Screw music [the slowed-down sound pioneered by the late DJ Screw in the 1990s]  — that’s really all people know Houston for. But to be truthful, all the artists and people from Houston are exposed to so many different cultures, so many different things that our sound and our art form is very transcendent — almost on another plane, just because we’re exposed to so much. We’re just different.

You were recently tapped to join the Insecure Writing Camp for the show’s final season. What was it like being a part of that experience, considering how influential the show has been for the culture?

It was really awesome being in that environment and being surrounded by people who were loving what they do just as much as I do and [are] super talented. Being there just meant a lot. I just felt like I was definitely a part of making history. Issa has definitely done a lot for not only young people, but young black people and young black women. Just to be a part of her movement, it’s really awesome.

It was crazy being there because I met so many people who were a part of the show — not just the cast, but the people who drive the show. Meeting them and them telling me, “Oh my god, Issa loves you and she said you must be here.” It was just super crazy, because we were all hand selected, but they were like, “No, but you don’t get it. She kept saying ‘you have to be here’.” So that was just a really crazy moment, talking to multiple people and them telling me that, you know?

Your music was also recently featured in HBO’s Generation. What does it feel like to experience your own music in the context of TV?

(Laughs). Yeah, it’s just kind of insane! It feels not real, like I’m in a movie, like I’m breaking the fourth wall. It’s pretty surreal. The first time it happened, it was super crazy. For Insecure season 3, I remember feeling like — even though I have the business handled and everything — for some reason, I thought “What if I told everybody that it was going to air this day and it doesn’t freaking play?” I was just getting so nervous, but then I heard it and I was just like, “Oh my God, this is crazy.” My heart was beating so freaking hard, I had chills. I had all of those things. I probably even peed on myself a little bit. It was just crazy how I felt. But the second time around, I’m just like “This feels like I’m breaking the fourth wall.”

What inspires your personal style?

I’ve noticed since I was a kid — I’m still very much so like this and I’m really happy that I’ve never lost that — I’m very impressionable. There’s so many things that I love in fashion and just love in art. I’m not very quick to be like “Oh, that’s weird” or have a weird bias and not really try to understand a certain thing. So, I draw inspiration from a lot of things. I really like streetwear and I also love Bohemian style, so I mix that a lot. Then, I also like kinda normcore school girl type of clothing — so I try to mix all those things together. I know that sounds so random and crazy, but those are definitely the ones that I really lean more towards. I’m always mixing things, just cause I appreciate so many different things.

Who are you currently listening to?

Can fans expect to see you on tour anytime soon?

Oh, 100%. I don’t have any tour dates, but just how things are going, I’m going to be on tour. I have a show on August 28th that’s going to be for my album release party.

Stream PSA here and be sure to check out Peyton’s site for updates on upcoming live shows.