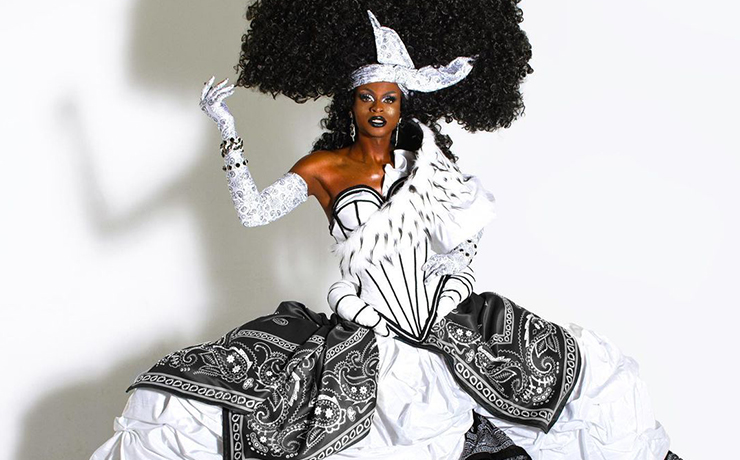 “Don’t let the smooth taste fool you, baby.” Symone, the winner of RuPaul’s Drag Race season 13, entered the work-room with this signature saying – and the Capricorn queen has kept our attention ever since. Let’s be honest, Symone was a stand-out queen from the start. Even RuPaul herself called Symone a star after a runway critique within the first three episodes. So what has it been like watching Symone’s climb to the crown? There were ups and downs, but in terms of star quality, there was never a doubt that Symone always had a certain something, that served a cut above the rest.

Season 13 of RuPaul’s Drag Race certainly had many strong competitors and standout faves, who all, at one point, seemed worthy of the winning title. There was Gottmik with her stunning fashion and makeup moments, Rosé’s acting and comedy chops, and even Utica’s ingenuity and sewing talent (comedy challenges aside, ahem.) But time and again, Symone had a knack for catching a Drag Race viewer’s eye, be it your first season watching, or your 13th. When did I know Symone had real star quality? It was during the Train challenge – as she stepped onto the runway with that ensemble, complete with a long turquoise durag train. It was quite clearly a winning look; innovative and serving personality. Tweets came out that night raving about Symone’s look (she ended up winning the challenge of course), one tweet reading “no one told Symone it’s not an All Stars season.”

Symone also made clear that she had room to grow, like in comedy and acting challenges, where she admitted to needing to channel more of Symone’s confidence – even though her “Flag Fectry” line delivery in the RuPaul-Mark Channel film was iconic. She was also one of two queens who didn’t know how to sew in the Bag Ball challenge where queens had to sew their own garments out of bags. Her finished red and white striped bralette and skirt look definitely wasn’t a Lala Ri moment, but gave the viewer some pause – could Symone handle the rest of the competition if it only got harder from here?

Although she lip-synced for her life, twice for placing in the bottom during the Roast and the Verified Rusical (acting and comedy being the challenges she struggled with once more) Symone’s lip syncs served face. Here’s what I mean: no matter the lip-sync, challenger’s moves and splits, Symone proves herself as a performer – simply by the looks she gave the judges, the camera and RuPaul, as she sang. Every viewer noticed it. And when it comes to lip syncs, the face usually wins every time. Notice Symone never busted out a split or huge dance move moment? It was all about the walk and the aura. In the finale, her looks featured an outfit made entirely out of Timberlands, a runway look made of red crimson fingernails, and a final hair-piece moment that capped off “Until the World Ends” by Britney Spears. This only helped heighten her abilities, unlike other queens who often use their reveals as the main attraction. Symone was serving up winner energy both when she lip-synced for her life, and when she lip-synced for the crown.

RuPaul’s Drag Race definitely introduced some fierce new queens to the series’ drag family this season, from fashion ingénues, to new Untucked classics (did someone say ‘arrogant’?) but when it comes to being worthy of the title, watching the Ebony Enchantress take the crown and scepter felt just right!