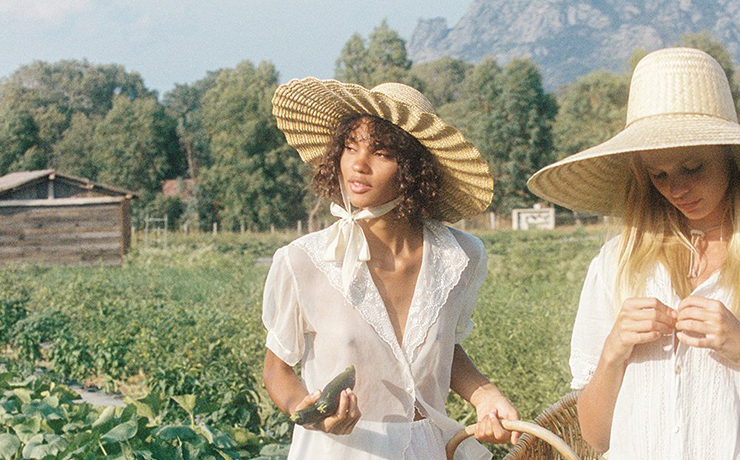 Courtesy of Lack of Color

Naturally, we as humans are drawn to the environment we lay home to, and from it we have birthed ideas that support our existences in the same way the earth has birthed us. As humans, we have cultivated a symbiotic tie to land through the communities we have built. This year’s emerging aesthetic ‘cottagecore” is an attempt to call on this importance of our ties to the world around us in both a visually alluring and physically enduring way.

In essence, “cottagecore” is an idyllic interpretation of pastoral life. It is lace dresses that spill off of forms, and the corset clad bodices. It is the faces that remain soft and ethereal amidst foraging and farming. It is the quaint cottage home and domesticity. This aesthetic has appealed to many on various social media platforms, sparking a community of individuals who now hope to have the ability to maintain the land around them, looking and feeling beautiful whilst doing so.

The aesthetic, although promoting itself as largely “wholesome”, has not been void of its well deserved criticisms.  A large issue has been found in the disregard for environmental interconnectedness. An alarming appeal has been in the ability to own land in very exploitative and self-serving means. This encourages practices that actively damages the environment itself and harms those who are disadvantaged from being able to access inherent necessities such as shelter, food, and water.

The aesthetic has also garnered an attraction from white supremacists who have found refuge in the selfish ownership of land that mirrors colonialism. They have actively utilized cottagecore as a medium in which to express their own interpretation of a return to “traditional values”. At first glance,  since traditional values make up the bulk of cottagecore, it can be hard to realize the innocent from the malevolent. There has been an attempt to derail further white supremacists involvement, by other members of the aesthetic’s community, by flagging supremacists and the ways in which they express both subtle and blatant forms of racism.

The prevalence of racism in such a space is important because it ignores how Black Americans have both contributed to the development of agriculture and have created their own aestheticization of the lifestyle as well. Artistic works such as Julie Dash’s Daughters of the Dust, and Beyonce’s visual album Lemonade are hallmark examples. Both films pay homage to Black heritage in America, and the vitality of the community throughout oppression. Daughters of the Dust is an independent film from the late 1990’s that centralizes its story on the Gullah, a group of Black Americans who have retained most of the culture from Africa located on the Sea Islands of South Carolina. Throughout the film are scenes of communal meals of okra and seafood, lush greenery and charming beaches, and southern antebellum dress that could be taken straight out of a moodboard. Beyoncé’s visual album directly references Dash’s film, and simultaneously creates its own distinctive narrative on the same basis of Black pastoralism. In the poetic sequences before and during each song, lies its own moments of heartfelt connection between people and between the earth and one’s identity.

A similar interpretation can be found in soul singer Minnie Riperton. With her fittingly titled compositions such as Come to my Garden, overalls, and Baby’s-breath hairstyle (a hairstyle also shared by Donna Summers), Riperton has provided another source of inspiration that shows the range in the Black rendition of the aesthetic, from the simplistic to the elaborate. A key difference between representations of Black pastoralism and cottagecore is the acknowledgement of both the colonial history and the enslavement of Black people that is relayed in Lemonade’s  “Freedom” and the followings of Gullah struggles in Daughters of the Dust.

Black Americans’ relationship to agriculture has always been difficult. After the end of enslavement, further laws were enacted to make the ability to maintain land for Black people nearly impossible. Today, out of over 2 million farmers, less than two percent of them are Black. There is an urgency for the preservation of the Black farms that exist in the face of systematic racism. Black Americans’ approach to agriculture has prioritized supporting one’s community in both body and spirit, honoring the land for its yield, and the urge for the return of land to the Indigenous peoples it has been taken from. This radical approach can be illustrated in inspiring farms such as Soul Fire Farm located in Petersburg, New York and Philly Urban Creators in Pennsylvania.

Black pastoralism has provided hope in the midst of racial injustice, the possibility to exist in tranquility. Cottagecore included, all takes of agricultural aesthetics must recognize the real issues that exist. So that the groups that face marginalization can find that they not only deserve, but can pursue the opportunity to create a haven in the rural.