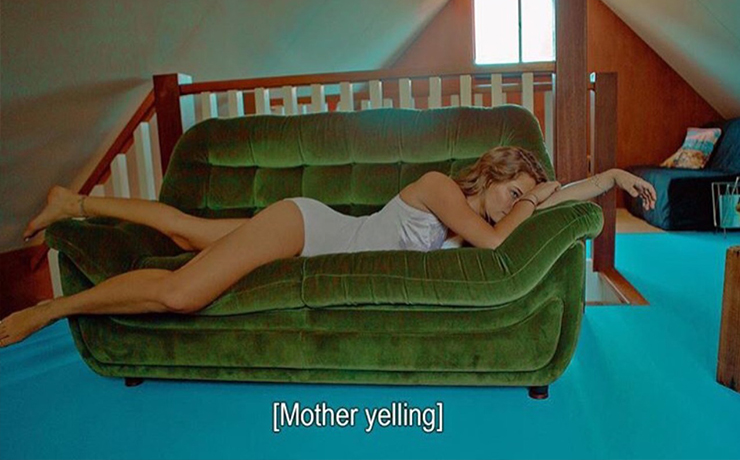 Australian, LA-based artist Sarah Bahbah uses her art practice to explore and resolve traumas, insecurities, and pains of her past. In recent years, she has gained attention particularly for her signature style of dreamy, ethereal photos covered with poetic, contemplative text, with some even dubbing them as aesthetic, elegant ‘memes’.

As an Australian with Palestinian and Jordanian roots, Bahbah grew up feeling torn, straddling the conservative traditions of her family and the drastically different Western ideals she faced, like so many born to immigrant families in the West. Struggling with topics surrounding beauty standards, body image and sexuality in relation to her family’s culture, Bahbah turns to art to express and release built up, complicated feelings which often stem from her upbringing.

Best known for provocative photo series that explicitly explore intimacy, self-love, and intense, frequently repressed, emotions, Bahbah came to the realization that her work never addressed her subject matter in direct rapport with her Arab heritage. Like many women of Arab heritage, there’s a constant feeling of shame and discomfort with expressing sexuality openly, due to existing social taboos in many parts of the Arab world. So, in her most recent photo series, Bahbah took it upon herself to address and dismantle this sexual shame and the bottled emotions that come with it. This series, Bahbah decided she needed an Arab woman as the muse; herself. With Bahbah in front of the camera lens this time around, the photo series is powerful, transparent and honest – making it one of her most intimate and personal projects to date.

The photo series is titled ‘3eib’, the Arabic word for shame, often used to express disapproval. The series, launched on September 28th, has been slowly shared via Bahbah’s Instagram, with one photo of the series posted every day or two. The project has allowed for Bahbah to create a conversation and space where others and herself can reclaim their sexuality, individuality and divine feminine expression.

Each photo montage, reassembling that of a cinematic still, shows Bahbah in lavish, luxurious backdrops and include one-line phrases which unpack past traumas or shunned upon subject matters. The photos include ‘subtitles’ in Arabic to make sure the messages are accessible to Arab women everywhere. Upon release, Bahbah braced herself for the judgement but knew the outcome would outweigh the hate she would receive, realizing how important it is to give Arab girls like herself a voice and platform with a sense of female empowerment.

Like so many artists, Bahbah’s art is her therapy. The 28 year old’s art ranges from photography to film and has had her work exhibited in numerous galleries and art fairs. She has collaborated with the likes of Gucci, GQ, and Condé Nast. Bahbah is releasing limited edition prints of the series ‘3eib’. Check it out on Bahbah’s IG, and take a look at her past projects here!